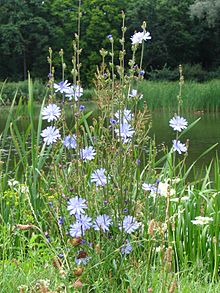 A perennial plant or simply perennial is a plant that lives more than two years.[1] The term (per- + -ennial, "through the years") is often used to differentiate a plant from shorter-lived annuals and biennials. The term is also widely used to distinguish plants with little or no woody growth from trees and shrubs, which are also technically perennials.[2]

Perennials—especially small flowering plants—that grow and bloom over the spring and summer, die back every autumn and winter, and then return in the spring from their rootstock, are known as herbaceous perennials. However, depending on the rigors of local climate, a plant that is a perennial in its native habitat, or in a milder garden, may be treated by a gardener as an annual and planted out every year, from seed, from cuttings or from divisions. Tomato vines, for example, live several years in their natural tropical/subtropical habitat but are grown as annuals in temperate regions because they don't survive the winter.

There is also a class of evergreen, or non-herbaceous, perennials, including plants like Bergenia which retain a mantle of leaves throughout the year. An intermediate class of plants is known as subshrubs, which retain a vestigial woody structure in winter, e.g. Penstemon. The local climate may dictate whether plants are treated as shrubs or perennials. For instance, many varieties of Fuchsia are shrubs in warm regions, but in colder temperate climates may be cut to the ground every year as a result of winter frosts.

The symbol for a perennial plant, based on Species Plantarum by Linnaeus, is

, which is also the astronomical symbol for the planet Jupiter.[3]

Perennial plants can be short-lived (only a few years) or like peonies they can be as long-lived as some woody plants like trees. They include a wide assortment of plant groups from ferns and liverworts to the highly diverse flowering plants like orchids and grasses.

Plants that flower and fruit only once and then die are termed monocarpic or semelparous. However, most perennials are polycarpic (or iteroparous), flowering over many seasons in their lifetime.

Perennials typically grow structures that allow them to adapt to living from one year to the next through a form of vegetative reproduction rather than seeding. These structures include bulbs, tubers, woody crowns, and rhizomes. They might have specialized stems or crowns that allow them to survive periods of dormancy over cold or dry seasons during the year. Annuals, by contrast, produce seeds to continue the species as a new generation while the growing season is suitable, and the seeds survive over the cold or dry period, to begin growth when the conditions are again suitable.

Many perennials have developed specialized features that allow them to survive extreme climatic and environmental conditions. Some have adapted to survive hot and dry conditions or cold temperatures. Those plants tend to invest many resources into their adaptations and often do not flower and set seed until after a few years of growth. Many perennials produce relatively large seeds, which can have an advantage, with larger seedlings produced after germination that can better compete with other plants. Some annuals produce many more seeds per plant in one season, while some (polycarpic) perennials are not under the same pressure to produce large numbers of seeds but can produce seeds over many years.

Dividing perennial plants is something that gardeners do around the months of September and October or in early spring. The point of doing the divisionin early autumn is to allow approximately six weeks for adequate root growth prior to the ground reaching a freezing temperature. Due to the leaves falling from trees, as well as the copious rain received in most places during the fall weeks, the ground has adequate moisture for rapid growth. Perennials that are insecurely or marginally hardy are best divided in spring.

Each type of plant must be separated differently;for example, plants with fibrous root systems like daylilies, Siberian iris or grasses can be pried apart with two garden forks inserted back to back, or cut by knives. However, plants such as bearded irises have a root system of rhizomes; these root systems should be planted with the top of the rhizome just above ground level, with leaves from the following year showing. The point of dividing perennials is to increase the amount of a single breed of plant in your garden. The more you divide your perennial plants every year, the more vast your garden will grow.[4]

In warmer and more favorable climates, perennials grow continuously. In seasonal climates, their growth is limited to the growing season.

In some species, perennials retain their foliage all year round; these are evergreen perennials. Other plants are deciduous perennials, for example, in temperate regions a perennial plant may grow and bloom during the warm part of the year, with the foliage dying back in the winter. In many parts of the world, seasonality is expressed as wet and dry periods rather than warm and cold periods, and deciduous perennials lose their leaves in the dry season.

With their roots protected below ground in the soil layer, perennial plants are notably tolerant of wildfire. Herbaceous perennials are also able to tolerate the extremes of cold in temperate and Arctic winters, with less sensitivity than trees or shrubs.

Perennial plants can also be differentiated from annuals and biennials in that perennials have the ability to remain dormant over long periods of time and then continue growth and reproduction. The meristem of perennial plants communicates with the hormones produced due to environmental situations (i.e. seasons), reproduction, and stage of development to begin and halt the ability to grow or flower. There is also a distinction between the ability to grow and actual task of growth. For example, most trees regain the ability to grow in the midst of winter but do not initiate physical growth until the spring and summer months. The start of dormancy can be seen in perennials plants through withering flowers, loss of leaves on trees, and halting of reproduction in both flowering and budding plants.[5]

The growth of a deciduous perennial plant is studied to the point where we can make basic assumptions. The first assumption is not only about the daily net photosynthetic rate of a plant increasing, but also how it saturates with the size of the plant. Secondly, while the production of the plant is discarded, the stored material will be used during the next season to keep it growing. Finally, the plant maximizes its lifetime by choosing the best growth schedule within each season and also allocating resources between reproduction for the year and the storage for next year. Perennial planting in general have a low storage, low growth rate, and a short growing season. When it comes to the optimal phenology of a plant, its quantity can be measured in two specific ways: firstly, by its productivity, which is the growth rate of the plant and secondly, by its stability, the survival storage it requires to survive through the season.[6]

Switchgrass is a deep-rooted perennial. These roots are more than 3 meters long.

Although most of humanity is fed by the re-sowing of the seeds of annual grain crops, (either naturally or by the manual efforts of man), perennial crops provide numerous benefits.[7] Perennial plants often have deep, extensive root systems which can hold soil to prevent erosion, capture dissolved nitrogen before it can contaminate ground and surface water, and out-compete weeds (reducing the need for herbicides). These potential benefits of perennials have resulted in new attempts to increase the seed yield of perennial species,[8] which could result in the creation of new perennial grain crops.[9] Some examples of new perennial crops being developed are perennial rice and intermediate wheatgrass. The Land Institute estimates that profitable, productive perennial grain crops will take at least 25 years to achieve.

Perennial plants dominate many natural ecosystems on land and in fresh water, with only a very few (e.g. Zostera) occurring in shallow sea water. Herbaceous perennial plants are particularly dominant in conditions too fire-prone for trees and shrubs, e.g., most plants on prairies and steppes are perennials; they are also dominant on tundra too cold for tree growth. Nearly all forest plants are perennials, including the trees and shrubs.

Perennial plants are usually better competitors than annual plants, especially under stable, resource-poor conditions. This is due to the development of larger root systems which can access water and soil nutrients deeper in the soil and to earlier emergence in the spring.

The following perennial plants are used as herbs:

Many vegetable plants can grow as perennials in tropical climates, but die in cold weather. Some of the more completely perennial vegetables are: