Penzance railway station serves the town of Penzance in west Cornwall, England. It is the terminus of the Cornish Main Line from Plymouth, 327 miles (526 km) from London Paddington via Bristol Temple Meads.

The station is owned by Network Rail and managed by Great Western Railway who also operate the train services, together with CrossCountry.

It is the southernmost railway station in the United Kingdom.

Inside the second station c. 1915, a Steam Rail Motor waits to depart

The station was opened by the West Cornwall Railway on 11 March 1852[1] as the terminus of its line from Redruth. A fire in 1876 destroyed the goods shed[2] and the wooden passenger buildings were replaced by the current station in 1879 built in rock-faced granite[3] to a design by William Lancaster Owen. The total cost was around £15,000 (equivalent to £1,540,000 in 2019)[4] which included the roof which cost £5,000, for the iron and 50 tons of glass.[5] The new platforms were used for the first time on 18 November 1879.[6] However, the new station suffered from teething problems, as by 1880 it was reported that some settlement in the masonry and shrinkage of the iron in the roof had caused several sheets of the glazing to break.[7]

Further alterations were made in 1937 and again in 1983 when a new ticket office and buffet were opened.[8]

The blocked-up archway in the wall that retains the hillside behind the platforms was used by the railway as a coal store. Freight traffic, especially the busy fish trade, was handled in the former goods yard, where cars are now parked, adjacent to the bus station. An engine shed was also here before being moved to the opposite side of the line near the end of the retaining wall. It has since been replaced by the new Penzance TMD outside the station at Long Rock. In November 1882 there were complaints about the paving, rail tracks and the difficulty for traffic to pass on the Albert Pier. The Borough Council requested the Railway Company to replace the paving with granite setts before relaying the rails.[9]

From 1996, South West Trains operated a weekly weekend service from London Waterloo as an extension of its service to Exeter St Davids. This ceased in December 2009.

Platforms 1, 2 and 3 are within the main train shed; Platform 4 on the south side is in the open air. A large stone at the end of this platform welcomes people to Penzance in both English and Cornish. This side of the station is built on the sea wall near the harbour; the other side is cut into the hillside. There is only one bi-directional line into/out of the station as far as the (now defunct) station at Marazion, as the former northbound line has been used to access Penzance TMD at Long Rock since 1977. 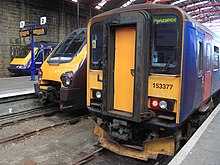 Penzance is the terminus of the Cornish Main Line. The current journey time to or from Paddington is between five and six hours.

Two operators serve Penzance. Great Western Railway operate a mixture of local trains to Plymouth and longer distance services to London Paddington. These include the Night Riviera overnight sleeping car service and the Golden Hind which offers an early morning service to London Paddington and an evening return. Other fast trains are the mid-morning Cornish Riviera and the afternoon Royal Duchy.[16] Services to London Paddington during the day use IET bi-mode multiple units (since 2018), but local services use GWR Class 43 ‘Castle’ sets or Class 150 and Class 158 DMUs. The Night Riviera uses a Class 57 locomotive hauling Mark 3 carriages.

There are a limited number of CrossCountry trains providing a service to destinations in the West Midlands and north such as Birmingham New Street, Manchester Piccadilly, Leeds, Edinburgh, Dundee and Glasgow Central.[16] Penzance is the terminus of the longest train service in the United Kingdom, which runs from Aberdeen takes about 13 and a half hours.[17]

Penzance is the second busiest station in Cornwall, Truro being the busiest with more than twice the number of passengers compared with Penzance. Comparing the year from April 2011 to that which started in April 2002, passenger numbers increased by 48%.[18]

The statistics cover twelve month periods that start in April.

Penzance bus station is situated immediately outside the station entrance; this example of transport integration arose from the Great Western Railway's operation of most of the early bus services in the area. It is served by First Kernow and National Express services.

The Tourism Information Centre is located between the bus station and the railway station entrance.