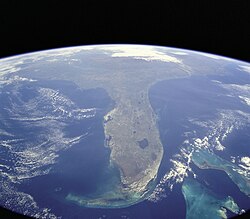 Florida, an example of a peninsula, photo taken during STS-95 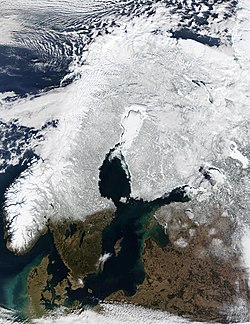 A peninsula (Latin: paeninsula from paene "almost” and insula "island") is a landform surrounded by water on the majority of its border while being connected to a mainland from which it extends.[1][2][3][4] The surrounding water is usually understood to be continuous, though not necessarily named as a single body of water. Peninsulas are not always named as such; one can also be referred to as a headland, cape, island promontory, bill, point, fork, or spit.[5] A point is generally considered a tapering piece of land projecting into a body of water that is less prominent than a cape.[6] A river which courses through a very tight meander is also sometimes said to form a "peninsula" within the (almost closed) loop of water. In English, the plural versions of peninsula are peninsulas and, less commonly, peninsulae.