The Peace of Westphalia (German: Westfälischer Friede) is the collective name for two peace treaties signed in October 1648 in the Westphalian cities of Osnabrück and Münster. They ended the Thirty Years' War and brought peace to the Holy Roman Empire, closing a calamitous period of European history that killed approximately eight million people.[1]

The negotiation process was lengthy and complex. Talks took place in two cities, because each side wanted to meet on territory under its own control. A total of 109 delegations arrived to represent the belligerent states, but not all delegations were present at the same time. Three treaties were signed to end each of the overlapping wars: the Peace of Münster, the Treaty of Münster, and the Treaty of Osnabrück. These treaties ended the Thirty Years' War (1618–1648) in the Holy Roman Empire, with the Habsburgs (rulers of Austria and Spain) and their Catholic allies on one side, battling the Protestant powers (Sweden, Denmark, and certain Holy Roman principalities) allied with France, which was Catholic but strongly anti-Habsburg under King Louis XIV.

Joachim Whaley, a leading English-language historian of the Holy Roman Empire, mentions that later commentators such as Leibniz, Rousseau, Kant and Schiller eulogized the Peace of Westphalia as the first step towards a universal peace, but he points out that "their projections for the future should not be mistaken for descriptions of reality"[2].

The main peace negotiations took place in Westphalia, in the neighboring cities of Münster and Osnabrück. Both cities were maintained as neutral and demilitarized zones for the negotiations.

In Münster, negotiations took place between the Holy Roman Empire and France, as well as between the Dutch Republic and Spain who on 30 January 1648 signed a peace treaty[5], that was not part of the Peace of Westphalia.[6] Münster had been, since its re-Catholicisation in 1535, a strictly mono-denominational community. It housed the Chapter of the Prince-Bishopric of Münster. Only Roman Catholic worship was permitted, while Calvinism and Lutheranism were prohibited.

Sweden preferred to negotiate with the Holy Roman Empire in Osnabrück, controlled by the Protestant forces. Osnabrück was a bidenominational Lutheran and Catholic city, with two Lutheran churches and two Catholic churches. The city council was exclusively Lutheran, and the burghers mostly so, but the city also housed the Catholic Chapter of the Prince-Bishopric of Osnabrück and had many other Catholic inhabitants. Osnabrück had been subjugated by troops of the Catholic League from 1628 to 1633 and then taken by Lutheran Sweden.[4] 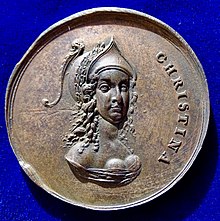 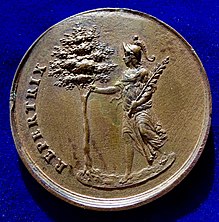 The reverse of this medal: Christina of Sweden as Minerva holding an olive branch in her left arm and grasping the tree of knowledge with her right hand.

The peace negotiations had no exact beginning and ending, because the 109 delegations never met in a plenary session. Instead, various delegations arrived between 1643 and 1646 and left between 1647 and 1649. The largest number of diplomats were present between January 1646 and July 1647. 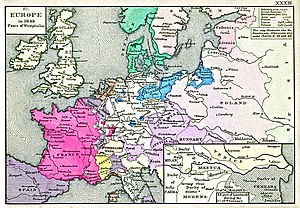 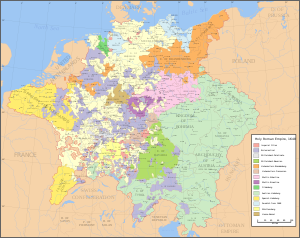 The power asserted by Ferdinand III was stripped from him and returned to the rulers of the Imperial States. The rulers of the Imperial States could henceforth choose their own official religions. Catholics and Protestants were redefined as equal before the law, and Calvinism was given legal recognition as an official religion.[12][13] The independence of the Dutch Republic, which practiced religious toleration, also provided a safe haven for European Jews.[14]

The Holy See was very displeased at the settlement, with Pope Innocent X calling it "null, void, invalid, iniquitous, unjust, damnable, reprobate, inane, empty of meaning and effect for all time" in the bull Zelo Domus Dei.[15][16]

The main tenets of the Peace of Westphalia were: 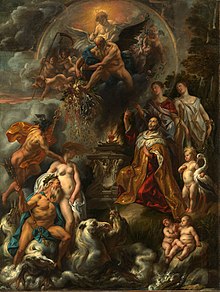 Allegory of the Peace of Westphalia, by Jacob Jordaens.

The treaties did not entirely end conflicts arising out of the Thirty Years' War. Fighting continued between France and Spain until the Treaty of the Pyrenees in 1659. The Dutch-Portuguese War had begun during the Iberian Union between Spain and Portugal, as part of the Eighty Years' War, and went on until 1663. Nevertheless, the Peace of Westphalia did settle many outstanding European issues of the time.

However, scholars have challenged the view that the modern European states system originated with the Westphalian treaties. The treaties don't contain anything in their text about religious freedom, sovereignty, or balance of power that can be construed as international law principles. Constitutional arrangements of the Holy Roman Empire are the only context in which sovereignty and religious equality are mentioned in the text, but they are not new ideas in this context. While the treaties don't contain the basis for the modern laws of nations themselves, they do symbolize and end of a long period of religious conflict in Europe.[26]