McGilligan was born in Hanover Place, Coleraine, County Londonderry, the son of Patrick McGilligan, a draper, who would serve as MP for South Fermanagh from 1892 to 1895 for the Irish Parliamentary Party, and Catherine O'Farrell.[2] He was educated at St Columb's College in Derry; Clongowes Wood College in County Kildare and University College Dublin.

He joined Sinn Féin but was unsuccessful in his attempt to be elected as an MP at the 1918 general election. McGilligan was called to the bar in 1921.[3]

Minister for Industry and Commerce

He was elected as a Cumann na nGaedheal TD for the National University of Ireland at a by-election held on 3 November 1923.[1] His time in Government was marked by economic retrenchment and a focus on low taxation. At the beginning of his time in office he declared that "People may have to die in this country and may have to die of starvation".[4] Between 1924 and 1932 McGilligan served as Minister for Industry and Commerce, notably pushing through the Shannon hydroelectric scheme, then the largest hydroelectricity project in the world. In 1927 he set up the Electricity Supply Board (ESB), and also the Agricultural Credit Corporation. 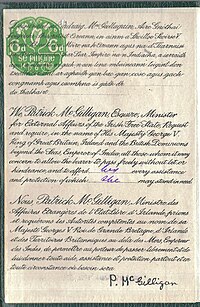 Request page of Irish Free State passport (issued 1930). "We, Patrick McGilligan, Esquire, Minister for External Affairs of the Irish Free State, Request and require, in the name of His Majesty George V. King of Great Britain, Ireland and the British Dominions beyond the Seas, Emperor of India, all those whom it may concern to allow the bearer to pass freely etc."

Also in 1927 McGilligan also took over the External Affairs portfolio following the assassination of Kevin O'Higgins by the anti-Treaty elements of the IRA, in revenge for O'Higgins' support for the execution of Republican prisoners during the Irish Civil War (1922–23). In this position he was hugely influential at the Committee on the Operation of Dominion Legislation and at the Imperial Conference in 1930 (jointly with representatives of Australia, Canada, New Zealand, South Africa and the United Kingdom). The Statute of Westminster that emerged from these meetings gave greater power to dominions in the Commonwealth like the Irish Free State.

During his period in opposition from 1932 to 1948 he built up a law practice and became professor of constitutional and international law at University College, Dublin, and when the National University of Ireland representation was transferred to the Seanad in 1937, McGilligan was elected as TD for the Dublin North-West constituency.[1]

In 1948 McGilligan was appointed Minister for Finance in the first Inter-Party Government. As Minister he undertook some major reforms. He instigated a new approach where Government invested radically in capital projects.[clarification needed] Colleagues however complained of his frequent absence from the Cabinet table and the difficulty of contacting him at the Department of Finance Between 1954 and 1957 he served as Attorney General, a job in which, as he himself admitted, he felt far more at home than as Minister for Finance. He retired from Dáil Éireann at the 1965 general election, having served for over 40 years.

Patrick McGilligan died in Dublin on 15 November 1979; despite his well-known fondness for predicting that he would die young, he reached the age of ninety. A later Attorney General, John M. Kelly in the preface to his definitive text, The Irish Constitution (1980), noted the remarkable number of senior judges who were former students of McGilligan and suggested that given his own firm belief in the value of judicial review he deserves much of the credit for the remarkable development of Irish law in this field since the early 1960s.