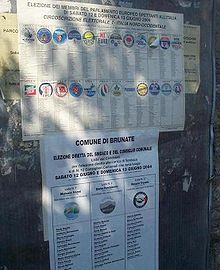 In these systems, parties make lists of candidates to be elected, and seats are distributed to each party in proportion to the number of votes the party receives. Voters may vote directly for the party, as in Albania, Argentina, Turkey, and Israel; or for candidates whose vote total will pool to the party, as in Finland, Brazil and the Netherlands; or for a list of candidates, as in Hong Kong.[2] Voters in Luxembourg's multi-seat constituencies can choose between voting for a complete list of candidates of a single party ("list vote") or voting for individual candidates from one or several lists ("panachage").[3]

Many variations on seat allocation within party-list proportional representation exist. The two most common are:

While the allocation formula is important, equally important is the district magnitude (number of seats in a constituency). The higher the district magnitude, the more proportional an electoral system becomes - the most proportional being when there is no division into constituencies at all and the entire country is treated as a single constituency. More, in some countries the electoral system works on two levels: at-large for parties, and in constituencies for candidates, with local party-lists seen as fractions of general, national lists. In this case, magnitude of local constituencies is irrelevant, seat apportionment being calculated at national level.

In France, party lists in proportional elections must include as many candidates (and twice as many substitutes for the departmental elections) as there are seats to be allocated, whereas in other countries "incomplete" lists are allowed.