Particle physics (also known as high energy physics) is a branch of physics that studies the nature of the particles that constitute matter and radiation. Although the word particle can refer to various types of very small objects (e.g. protons, gas particles, or even household dust), particle physics usually investigates the irreducibly smallest detectable particles and the fundamental interactions necessary to explain their behaviour. By our current understanding, these elementary particles are excitations of the quantum fields that also govern their interactions. The currently dominant theory explaining these fundamental particles and fields, along with their dynamics, is called the Standard Model. Thus, modern particle physics generally investigates the Standard Model and its various possible extensions, e.g. to the newest "known" particle, the Higgs boson, or even to the oldest known force field, gravity.[1][2] 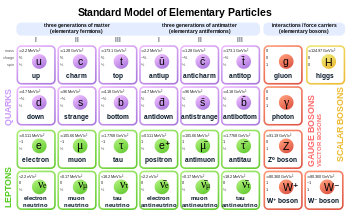 The particle content of the Standard Model of Physics

Modern particle physics research is focused on subatomic particles, including atomic constituents such as electrons, protons, and neutrons (protons and neutrons are composite particles called baryons, made of quarks), produced by radioactive and scattering processes, such as photons, neutrinos, and muons, as well as a wide range of exotic particles. Dynamics of particles are also governed by quantum mechanics; they exhibit wave–particle duality, displaying particle-like behaviour under certain experimental conditions and wave-like behaviour in others. In more technical terms, they are described by quantum state vectors in a Hilbert space, which is also treated in quantum field theory. Following the convention of particle physicists, the term elementary particles is applied to those particles that are, according to current understanding, presumed to be indivisible and not composed of other particles.[3]

The Standard Model has been found to agree with almost all the experimental tests conducted to date. However, most particle physicists believe that it is an incomplete description of nature and that a more fundamental theory awaits discovery (See Theory of Everything). In recent years, measurements of neutrino mass have provided the first experimental deviations from the Standard Model, since neutrinos are massless in the Standard Model.[5]

The idea that all matter is fundamentally composed of elementary particles dates from at least the 6th century BC.[6] In the 19th century, John Dalton, through his work on stoichiometry, concluded that each element of nature was composed of a single, unique type of particle.[7] The word atom, after the Greek word atomos meaning "indivisible", has since then denoted the smallest particle of a chemical element, but physicists soon discovered that atoms are not, in fact, the fundamental particles of nature, but are conglomerates of even smaller particles, such as the electron. The early 20th century explorations of nuclear physics and quantum physics led to proofs of nuclear fission in 1939 by Lise Meitner (based on experiments by Otto Hahn), and nuclear fusion by Hans Bethe in that same year; both discoveries also led to the development of nuclear weapons. Throughout the 1950s and 1960s, a bewildering variety of particles were found in collisions of particles from beams of increasingly high energy. It was referred to informally as the "particle zoo". That term was deprecated[citation needed] after the formulation of the Standard Model during the 1970s, in which the large number of particles was explained as combinations of a (relatively) small number of more fundamental particles.

The current state of the classification of all elementary particles is explained by the Standard Model, which gained widespread acceptance in the mid-1970s after experimental confirmation of the existence of quarks. It describes the strong, weak, and electromagnetic fundamental interactions, using mediating gauge bosons. The species of gauge bosons are eight gluons,
W−
,
W+
and
Z
bosons, and the photon.[4] The Standard Model also contains 24 fundamental fermions (12 particles and their associated anti-particles), which are the constituents of all matter.[8] Finally, the Standard Model also predicted the existence of a type of boson known as the Higgs boson. On 4 July 2012, physicists with the Large Hadron Collider at CERN announced they had found a new particle that behaves similarly to what is expected from the Higgs boson.[9]

Many other particle accelerators also exist.

The techniques required for modern experimental particle physics are quite varied and complex, constituting a sub-specialty nearly completely distinct[citation needed] from the theoretical side of the field.

Theoretical particle physics attempts to develop the models, theoretical framework, and mathematical tools to understand current experiments and make predictions for future experiments (see also theoretical physics). There are several major interrelated efforts being made in theoretical particle physics today. One important branch attempts to better understand the Standard Model and its tests. By extracting the parameters of the Standard Model, from experiments with less uncertainty, this work probes the limits of the Standard Model and therefore expands our understanding of nature's building blocks. Those efforts are made challenging by the difficulty of calculating quantities in quantum chromodynamics. Some theorists working in this area refer to themselves as phenomenologists and they may use the tools of quantum field theory and effective field theory.[citation needed] Others make use of lattice field theory and call themselves lattice theorists.

Another major effort is in model building where model builders develop ideas for what physics may lie beyond the Standard Model (at higher energies or smaller distances). This work is often motivated by the hierarchy problem and is constrained by existing experimental data.[citation needed] It may involve work on supersymmetry, alternatives to the Higgs mechanism, extra spatial dimensions (such as the Randall–Sundrum models), Preon theory, combinations of these, or other ideas.

A third major effort in theoretical particle physics is string theory. String theorists attempt to construct a unified description of quantum mechanics and general relativity by building a theory based on small strings, and branes rather than particles. If the theory is successful, it may be considered a "Theory of Everything", or "TOE".

There are also other areas of work in theoretical particle physics ranging from particle cosmology to loop quantum gravity.[citation needed]

This division of efforts in particle physics is reflected in the names of categories on the arXiv, a preprint archive:[22] hep-th (theory), hep-ph (phenomenology), hep-ex (experiments), hep-lat (lattice gauge theory).

In principle, all physics (and practical applications developed therefrom) can be derived from the study of fundamental particles. In practice, even if "particle physics" is taken to mean only "high-energy atom smashers", many technologies have been developed during these pioneering investigations that later find wide uses in society. Particle accelerators are used to produce medical isotopes for research and treatment (for example, isotopes used in PET imaging), or used directly in external beam radiotherapy. The development of superconductors has been pushed forward by their use in particle physics. The World Wide Web and touchscreen technology were initially developed at CERN. Additional applications are found in medicine, national security, industry, computing, science, and workforce development, illustrating a long and growing list of beneficial practical applications with contributions from particle physics.[23]

The primary goal, which is pursued in several distinct ways, is to find and understand what physics may lie beyond the standard model. There are several powerful experimental reasons to expect new physics, including dark matter and neutrino mass. There are also theoretical hints that this new physics should be found at accessible energy scales.

Much of the effort to find this new physics are focused on new collider experiments. The Large Hadron Collider (LHC) was completed in 2008 to help continue the search for the Higgs boson, supersymmetric particles, and other new physics. An intermediate goal is the construction of the International Linear Collider (ILC), which will complement the LHC by allowing more precise measurements of the properties of newly found particles. In August 2004, a decision for the technology of the ILC was taken but the site has still to be agreed upon.

In addition, there are important non-collider experiments that also attempt to find and understand physics beyond the Standard Model. One important non-collider effort is the determination of the neutrino masses, since these masses may arise from neutrinos mixing with very heavy particles. In addition, cosmological observations provide many useful constraints on the dark matter, although it may be impossible to determine the exact nature of the dark matter without the colliders. Finally, lower bounds on the very long lifetime of the proton put constraints on Grand Unified Theories at energy scales much higher than collider experiments will be able to probe any time soon.

In May 2014, the Particle Physics Project Prioritization Panel released its report on particle physics funding priorities for the United States over the next decade. This report emphasized continued U.S. participation in the LHC and ILC, and expansion of the Deep Underground Neutrino Experiment, among other recommendations.

The term high energy physics requires elaboration. Intuitively, it might seem incorrect to associate "high energy" with the physics of very small, low mass objects, like subatomic particles. By comparison, an example of a macroscopic system, one gram of hydrogen, has ~ 6×1023 times[24] the mass of a single proton. Even an entire beam of protons circulated in the LHC contains ~ 3.23×1014 protons,[25] each with 6.5×1012 eV of energy, for a total beam energy of ~ 2.1×1027 eV or ~ 336.4 MJ, which is still ~ 2.7×105 times lower than the mass-energy of a single gram of hydrogen. Yet, the macroscopic realm is "low energy physics",[citation needed] while that of quantum particles is "high energy physics".

The interactions studied in other fields of physics and science have comparatively very low energy. For example, the photon energy of visible light is about 1.8 to 3.1 eV. Similarly, the bond-dissociation energy of a carbon–carbon bond is about 3.6 eV. Other chemical reactions typically involve similar amounts of energy. Even photons with far higher energy, gamma rays of the kind produced in radioactive decay, mostly have photon energy between 105 eV and 107 eV – still two orders of magnitude lower than the mass of a single proton. Radioactive decay gamma rays are considered as part of nuclear physics, rather than high energy physics.

The proton has a mass of around 9.4×108 eV; some other massive quantum particles, both elementary and hadronic, have yet higher masses. Due to these very high energies at the single particle level, particle physics is, in fact, high-energy physics.