Advertisement - You can get this game from STEAM
For other uses, see Parsec (disambiguation).
Unit of length used in astronomy

The parsec (symbol: pc) is a unit of length used to measure the large distances to astronomical objects outside the Solar System. One parsec is approximately equal to 31 trillion kilometres (19 trillion miles),[a] or 210,000 astronomical units, and equates to about 3.3 light-years. A parsec is obtained by the use of parallax and trigonometry, and is defined as the distance at which one astronomical unit subtends an angle of one arcsecond[1] (1/3600 of a degree). This corresponds to approximately 648000/π astronomical units, i.e. 1 pc = 1 au/tan(1″).[2] The nearest star, Proxima Centauri, is about 1.3 parsecs (4.2 light-years) from the Sun.[3] Most of the stars visible to the unaided eye in the night sky are within 500 parsecs of the Sun.[citation needed]

The parsec unit was probably first suggested by the British astronomer Herbert Hall Turner in 1913.[4] Named as a portmanteau of the parallax of one arcsecond, it was defined to make calculations of astronomical distances from only their raw observational data quick and easy for astronomers. Partly for this reason, it is the unit preferred in astronomy and astrophysics, though the light-year remains prominent in popular science texts and common usage. Although parsecs are used for the shorter distances within the Milky Way, multiples of parsecs are required for the larger scales in the universe, including kiloparsecs (kpc) for the more distant objects within and around the Milky Way, megaparsecs (Mpc) for mid-distance galaxies, and gigaparsecs (Gpc) for many quasars and the most distant galaxies.

The parsec is defined as being equal to the length of the adjacent leg (opposite leg being 1 AU) of an extremely elongated imaginary right triangle in space. The two dimensions on which this triangle is based are its shorter leg, of length one astronomical unit (the average Earth-Sun distance), and the subtended angle of the vertex opposite that leg, measuring one arcsecond. Applying the rules of trigonometry to these two values, the unit length of the other leg of the triangle (the parsec) can be derived. 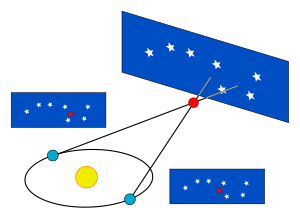 Though it may have been used before, the term parsec was first mentioned in an astronomical publication in 1913. Astronomer Royal Frank Watson Dyson expressed his concern for the need of a name for that unit of distance. He proposed the name astron, but mentioned that Carl Charlier had suggested siriometer and Herbert Hall Turner had proposed parsec.[4] It was Turner's proposal that stuck.

Calculating the value of a parsec

By the 2015 definition, 1 au of arc length subtends an angle of 1″ at the center of the circle of radius 1 pc. Converting from degree/minute/second units to radians,

(to the nearest metre)

In the diagram above (not to scale), S represents the Sun, and E the Earth at one point in its orbit. Thus the distance ES is one astronomical unit (au). The angle SDE is one arcsecond (1/3600 of a degree) so by definition D is a point in space at a distance of one parsec from the Sun. Through trigonometry, the distance SD is calculated as follows:

A corollary states that a parsec is also the distance from which a disc one astronomical unit in diameter must be viewed for it to have an angular diameter of one arcsecond (by placing the observer at D and a diameter of the disc on ES).

Mathematically, to calculate distance, given obtained angular measurements from instruments in arcseconds, the formula would be:

The length of the parsec used in IAU 2015 Resolution B2[10] (exactly 648000/π astronomical units) corresponds exactly to that derived using the small-angle calculation. This differs from the classic inverse-tangent definition by about 200 km, i.e. only after the 11th significant figure. As the astronomical unit was defined by the IAU (2012) as an exact SI length in metres, so now the parsec corresponds to an exact SI length in metres. To the nearest meter, the small-angle parsec corresponds to 30856775814913673 m.

The parallax method is the fundamental calibration step for distance determination in astrophysics; however, the accuracy of ground-based telescope measurements of parallax angle is limited to about 0.01″, and thus to stars no more than 100 pc distant.[11] This is because the Earth's atmosphere limits the sharpness of a star's image.[12] Space-based telescopes are not limited by this effect and can accurately measure distances to objects beyond the limit of ground-based observations. Between 1989 and 1993, the Hipparcos satellite, launched by the European Space Agency (ESA), measured parallaxes for about 100000 stars with an astrometric precision of about 0.97 mas, and obtained accurate measurements for stellar distances of stars up to 1000 pc away.[13][14]

ESA's Gaia satellite, which launched on 19 December 2013, is intended to measure one billion stellar distances to within 20 microarcsecond, producing errors of 10% in measurements as far as the Galactic Centre, about 8000 pc away in the constellation of Sagittarius.[15]

Distances less than a parsec

Distances expressed in fractions of a parsec usually involve objects within a single star system. So, for example: 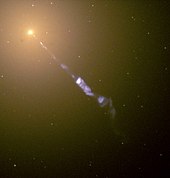 As observed by the Hubble Space Telescope, the astrophysical jet erupting from the active galactic nucleus of M87 subtends 20″ and is thought to be 1.5 kiloparsecs (4,892 ly) long (the jet is somewhat foreshortened from Earth's perspective).

Distances expressed in parsecs (pc) include distances between nearby stars, such as those in the same spiral arm or globular cluster. A distance of 1,000 parsecs (3,262 ly) is denoted by the kiloparsec (kpc). Astronomers typically use kiloparsecs to express distances between parts of a galaxy, or within groups of galaxies. So, for example:

Astronomers typically express the distances between neighbouring galaxies and galaxy clusters in megaparsecs (Mpc). A megaparsec is one million parsecs, or about 3,260,000 light years. Sometimes, galactic distances are given in units of Mpc/h (as in "50/h Mpc", also written "50 Mpc h−1"). h is a parameter in the range 0.5 < h < 0.75 reflecting the uncertainty in the value of the Hubble constant H for the rate of expansion of the universe: h = H/100 km/s/Mpc. The Hubble constant becomes relevant when converting an observed redshift z into a distance d using the formula d ≈ c/H × z.[16]

One gigaparsec (Gpc) is one billion parsecs — one of the largest units of length commonly used. One gigaparsec is about 3.26 billion ly, or roughly 1/14 of the distance to the horizon of the observable universe (dictated by the cosmic background radiation). Astronomers typically use gigaparsecs to express the sizes of large-scale structures such as the size of, and distance to, the CfA2 Great Wall; the distances between galaxy clusters; and the distance to quasars.

To determine the number of stars in the Milky Way, volumes in cubic kiloparsecs[b] (kpc3) are selected in various directions. All the stars in these volumes are counted and the total number of stars statistically determined. The number of globular clusters, dust clouds, and interstellar gas is determined in a similar fashion. To determine the number of galaxies in superclusters, volumes in cubic megaparsecs[b] (Mpc3) are selected. All the galaxies in these volumes are classified and tallied. The total number of galaxies can then be determined statistically. The huge Boötes void is measured in cubic megaparsecs.[19]

In physical cosmology, volumes of cubic gigaparsecs[b] (Gpc3) are selected to determine the distribution of matter in the visible universe and to determine the number of galaxies and quasars. The Sun is currently the only star in its cubic parsec,[b] (pc3) but in globular clusters the stellar density could be from 100–1000 pc−3.

The observational volume of gravitational wave interferometers (eg: LIGO, Virgo) is stated in terms of cubic megaparsecs[b] (Mpc3), and is essentially the value of the effective distance cubed.

The parsec was apparently used incorrectly as a measurement of time by Han Solo in A New Hope, the first Star Wars film, when he claimed to have "made the Kessel Run in less than 12 parsecs". The claim was repeated in The Force Awakens, but was retconned in Solo: A Star Wars Story, by stating the Millennium Falcon traveled a shorter distance (as opposed to a quicker time) due to a more dangerous route through hyperspace.[20] It is also used incorrectly as a spatial unit in The Mandalorian.[21]

In the book A Wrinkle in Time, "megaparsec" is Mr. Murry's nickname for his daughter Meg.[22]