Snake from the vivarium

Architect Alejandro Echeverri designed the museum.[4] It has a combination of indoor and outdoor space. Its four red "cubes" house the museum's science and technology rooms.[5] 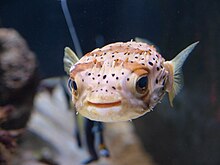 Pufferfish from the aquarium

Explora aquarium houses nearly 4,000 organisms and 400 of Colombia's most common species.[1] Its 25 tanks exhibit many of the most representative species that inhabit Colombia's rivers and oceans, including piranhas, electric eels, and a panchromatic kaleidoscope of fish.[6]

Parque Explora is located in the northern area of Medellín, known as the North Zone (Zona Norte), between Parque Norte and the Botanical Garden of Medellín. The museum can be reached by the Medellín Metro on line A, at the University Station stop, which is named for the nearby University of Antioquia.[6]