The Park of 28 Panfilov Guardsmen (Kazakh: 28 гвардияшы-панфиловшылар саябағы) is an urban park located in east-central Almaty in the area surrounding the Ascension Cathedral. It is dedicated to and named after the Panfilov heroes which were the 28 soldiers of an Alma-Ata Infantry unit who allegedly died while defending Moscow from the German invasion during the Great Patriotic War. The group took its name from Ivan Panfilov, the General commanding the 316th division which, in spite of heavy casualties, believed at that time managed to significantly delay the Germans advance to Moscow, thus buying the time for the defenders of the city. An eternal flame commemorating the fallen of the World War II and the Great Patriotic War burns in front of the giant black monument of soldiers from all 15 Soviet republics. 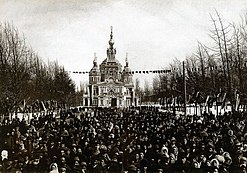 Ascension Cathedral during the Romanov Tercentenary, 1913

The Park was founded in the 1870s on the place of a cossack village cemetery, which was originally named Starokladbischensky Park, meaning Old Cemetery Park which was destroyed in 1921. The only preserved graves that avoided destruction were Kolpakovsky family was daughter Leonilla Kolpakovsky who was buried in 1860 and grandson of Vladimir Basilewski who was buried in 1882; which the gravestone was restored in 2011. Mass grave memorials of victims of the 1887 earthquake are currently lost. Starokladbischensky Park was later connected to the Catholic which it was called Urban Garden. The garden was removed which Andrey Pavlovich Zenkov participated in role of changing the park.

The name of the park changed on a regular basis, in 1899 during the 100th anniversary birth of famous Russian poet, Alexander Pushkin. The park changed its name to Pushkin Garden. Between 1904 and 1907, there was a period of construction on one of Almaty’s few surviving Tsarist-era buildings. In 1913, the park held an agricultural and industrial exhibition for the 300th anniversary of the Romanov dynasty. Architectural and construction part was organized by military engineer Andrey Pavlovich Zenkov. On the eastern part of the territory, new buildings were built in different architectural styles, 28 state-owned and 15 private pavilions. The main avenue of the park along the avenue Kolpakovsky was decorated with yurts, which housed all the diversity of the Kazakh national art, everyday life and crafts. Nearby the Ascension Cathedral, the city council, and the cinema which then was nicknamed "of the twentieth century" were equipped with the first electricity that affected the image of the "Garden City". The park changed its name to the "Park of the Fallen Heroes" in 1919 due to the burial of A. Berezovsky and K. Ovcharov and other heroes who participated in the Red Army during the Russian Civil War which then changed its name to Lenin Local Park with urban cemeteries being prohibited. During the years before 1927, the park was called variously called Gubkompomarma Garden or Public Park of the 1st May. In 1927, during the conversion of Alma-Ata, as the new capital of Soviet Kazakhstan, the park was named Federation of Soviet Republics.

Eternal flame at the park during Victory Day celebration, 9 May 2012

Until 5 May 1942, the park changed into its current name when it was finally renamed in honor of Panfilov soldiers of the 1075 regiment of the 312th rifle division, who having small forces at that time believed that they were able to blunt the German attack at the approaches to Moscow in November 1941. The territory of the Park of 28 Panfilov Guardsmen includes several historical buildings dated back to early and mid-20th century, such as: Ascension Cathedral, erected without a single nail, the Museum of Folk Musical Instruments, and the House of Officers. Nowadays, the park is popular place for the locals and as well for tourists. During the Victory Day celebrations, Almaty citizens usually lay flowers and wreaths to its foot in respect for those killed in World War II. Zenkov played an important role of creating the current modern-day park and as well as improving Almaty. In 1982, he was made into a list of historical and cultural monuments of republican significance of Kazakhstan, which were three sites, located in the Park of 28 Panfilov Guardsmen—the building of the museum of folk instruments, the Ascension Cathedral and the Memorial of Glory.[1][2][3]

There was a suggestion to rename the current existing name for the park due to the July 2015 publications by the State Archive of the Russian Federation that the military newspaper Krasnaya Zvezda had concocted the story's details of the heroic story. However, there are no considerations by the city officials in renaming the park. 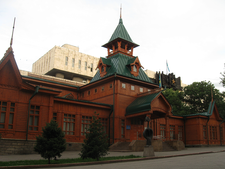 In the eastern part of the park, there is the museum of national musical instruments. This wooden building was erected in 1908, simultaneously with Ascension Cathedral. During the period, the military leadership of the Turkestan governor-generalship once met here for ceremonies and state receptions. Later the building was used as the House of Officers until 1980, when the museum of national musical instruments of Kazakhstan was opened here.

The museum was named after known Kazakh musician of 19th and 20th century Ykylas, who promoted the purity of folk culture and preservation of various national instruments. Today, there are more than 1000 items of instruments in collection of the museum, which are divided into 60 types of Kazakh national musical instruments. The collection also includes instruments which were owned by famous singers, improvisers, and composers. The most ancient exhibits are dated back to the 17th century. From the outside, the building is made of wood and resembles the traditional Russian building. On the inside the decoration corresponds to classic Kazakh national patterns. And in front of the building the sculpture of Kazakh bow instrument, Narkobyz is erected. Besides the view of all instruments, the visitors can listen to the sounding of these instruments in the performance of folk ensemble Sazgen.