Clade Monophyly Apocrita
Property of a group which includes only descendants of a common ancestor, but excludes at least one monophyletic subgroup

In this phylogenetic tree, the green group is paraphyletic; it is composed of a common ancestor (the lowest green vertical stem) and its descendents, but it excludes the blue group (a monophyletic group) which diverged from the green group.

In taxonomy, a group is paraphyletic if it consists of the group's last common ancestor and all descendants of that ancestor excluding a few—typically only one or two—monophyletic subgroups. The group is said to be paraphyletic with respect to the excluded subgroups. The arrangement of the members of a paraphyletic group is called a paraphyly. The term is commonly used in phylogenetics (a subfield of biology) and in linguistics.

The term was coined to apply to well-known taxa like Reptilia (reptiles) which, as commonly named and traditionally defined, is paraphyletic with respect to mammals and birds. Reptilia contains the last common ancestor of reptiles and all descendants of that ancestor, including all extant reptiles as well as the extinct synapsids, except for mammals and birds. Other commonly recognized paraphyletic groups include fish, monkeys, and lizards.[1]

The term paraphyly, or paraphyletic, derives from the two Ancient Greek words παρά (pará), meaning "beside, near", and φῦλον (phûlon), meaning "genus, species",[2][3] and refers to the situation in which one or several monophyletic subgroups of organisms (e.g., genera, species) are left apart from all other descendants of a unique common ancestor.

Conversely, the term monophyly, or monophyletic, builds on the Ancient Greek prefix μόνος (mónos), meaning "alone, only, unique",[2][3] and refers to the fact that a monophyletic group includes organisms consisting of all the descendants of a unique common ancestor.

By comparison, the term polyphyly, or polyphyletic, uses the Ancient Greek prefix πολύς (polús), meaning "many, a lot of",[2][3] and refers to the fact that a polyphyletic group includes organisms arising from multiple ancestral sources. 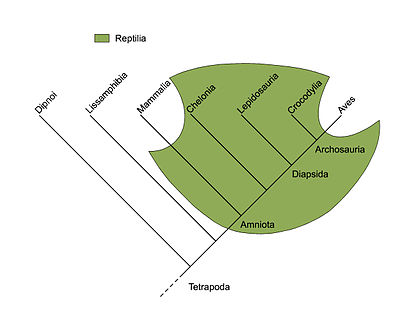 Reptilia (green field) is a paraphyletic group comprising all amniotes (Amniota) except for two subgroups: Mammalia (mammals) and Aves (birds); therefore, Reptilia is not a clade. In contrast, Amniota itself is a clade, which is a monophyletic group. 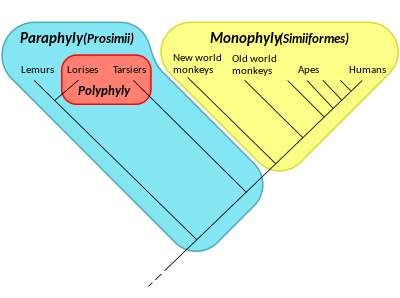 Cladogram of the primates, showing a monophyly (the simians, in yellow), a paraphyly (the prosimians, in blue, including the red patch), and a polyphyly (the night-active primates, the lorises and the tarsiers, in red).

A group whose identifying features evolved convergently in two or more lineages is polyphyletic (Greek πολύς [polys], "many"). More broadly, any taxon that is not paraphyletic or monophyletic can be called polyphyletic.

These terms were developed during the debates of the 1960s and 1970s accompanying the rise of cladistics.

Paraphyletic groupings are considered problematic by many taxonomists, as it is not possible to talk precisely about their phylogenetic relationships, their characteristic traits and literal extinction.[5][6] Related terminology that may be encountered are stem group, chronospecies, budding cladogenesis, anagenesis, or 'grade' groupings. Paraphyletic groups are often a relic from previous erroneous assessments about phylogenic relationships, or from before the rise of cladistics.[7] 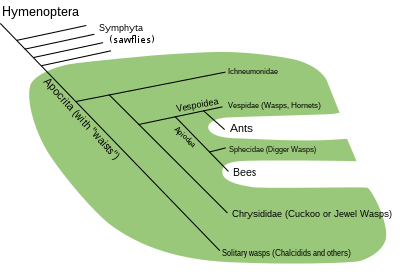 The prokaryotes (single-celled life forms without cell nuclei), because they exclude the eukaryotes, a descendant group. Bacteria and Archaea are prokaryotes, but archaea and eukaryotes share a common ancestor that is not ancestral to the bacteria. The prokaryote/eukaryote distinction was proposed by Edouard Chatton in 1937[8] and was generally accepted after being adopted by Roger Stanier and C.B. van Niel in 1962. The botanical code (the ICBN, now the ICN) abandoned consideration of bacterial nomenclature in 1975; currently, prokaryotic nomenclature is regulated under the ICNB with a starting date of 1 January 1980 (in contrast to a 1753 start date under the ICBN/ICN).[9]

Among plants, dicotyledons (in the traditional sense) are paraphyletic because the group excludes monocotyledons. "Dicotyledon" has not been used as a botanic classification for decades, but is allowed as a synonym of Magnoliopsida.[note 1] Phylogenetic analysis indicates that the monocots are a development from a dicot ancestor. Excluding monocots from the dicots makes the latter a paraphyletic group.[10]

Among animals, several familiar groups are not, in fact, clades. The order Artiodactyla (even-toed ungulates) is paraphyletic because it excludes Cetaceans (whales, dolphins, etc.). In the ICZN Code, the two taxa are orders of equal rank. Molecular studies, however, have shown that the Cetacea descend from artiodactyl ancestors, although the precise phylogeny within the order remains uncertain. Without the Cetacean descendants the Artiodactyls must be paraphyletic.[11] The class Reptilia as traditionally defined is paraphyletic because it excludes birds (class Aves) and mammals. In the ICZN Code, the three taxa are classes of equal rank. However, mammals hail from the synapsids (which were once described as "mammal-like reptiles") and birds are descended from the dinosaurs (a group of Diapsida), both of which are reptiles.[12] Alternatively, reptiles are paraphyletic because they gave rise to (only) birds. Birds and reptiles together make Sauropsids. Osteichthyes, bony fish, are paraphyletic when they include only Actinopterygii (ray-finned fish) and Sarcopterygii (lungfish, etc.), excluding tetrapods; more recently, Osteichthyes is treated as a clade, including the tetrapods.[13][14] The wasps are paraphyletic, consisting of the narrow-waisted Apocrita without the ants and bees.[15] The sawflies (Symphyta) are similarly paraphyletic, forming all of the Hymenoptera except for the Apocrita, a clade deep within the sawfly tree.[13] Crustaceans are not a clade because the Hexapoda (insects) are excluded. The modern clade that spans all of them is the Tetraconata.[16][17]

Species have a special status in systematics as being an observable feature of nature itself and as the basic unit of classification.[18] The phylogenetic species concept requires species to be monophyletic, but paraphyletic species are common in nature. Paraphyly is common in speciation, whereby a mother species (a paraspecies) gives rise to a daughter species without itself becoming extinct.[19] Research indicates as many as 20 percent of all animal species and between 20 and 50 percent of plant species are paraphyletic.[20][21] Accounting for these facts, some taxonomists argue that paraphyly is a trait of nature that should be acknowledged at higher taxonomic levels.[22][23]

When the appearance of significant traits has led a subclade on an evolutionary path very divergent from that of a more inclusive clade, it often makes sense to study the paraphyletic group that remains without considering the larger clade. For example, the Neogene evolution of the Artiodactyla (even-toed ungulates, like deer) has taken place in an environment so different from that of the Cetacea (whales, dolphins, and porpoises) that the Artiodactyla are often studied in isolation even though the cetaceans are a descendant group. The prokaryote group is another example; it is paraphyletic because it excludes many of its descendant organisms (the eukaryotes), but it is very useful because it has a clearly defined and significant distinction (absence of a cell nucleus, a plesiomorphy) from its excluded descendants.

The term "evolutionary grade" is sometimes used for paraphyletic groups.[25] Moreover, the concepts of monophyly, paraphyly, and polyphyly have been used in deducing key genes for barcoding of diverse group of species.[26]

Viviparity, the production of offspring without the laying of a fertilized egg, developed independently in the lineages that led to humans (Homo sapiens) and southern water skinks (Eulampus tympanum, a kind of lizard). Put another way, at least one of the lineages that led to these species from their last common ancestor contains nonviviparous animals, the pelycosaurs ancestral to mammals; vivipary appeared subsequently in the mammal lineage.

Independently-developed traits like these cannot be used to distinguish paraphyletic groups because paraphyly requires the excluded groups to be monophyletic. Pelycosaurs were descended from the last common ancestor of skinks and humans, so vivipary could be paraphyletic only if the pelycosaurs were part of an excluded monophyletic group. Because this group is monophyletic, it contains all descendants of the pelycosaurs; because it is excluded, it contains no viviparous animals. This does not work, because humans are among these descendants. Vivipary in a group that includes humans and skinks cannot be paraphyletic.

The following list recapitulates a number of paraphyletic groups proposed in the literature, and provides the corresponding monophyletic taxa.

The concept of paraphyly has also been applied to historical linguistics, where the methods of cladistics have found some utility in comparing languages. For instance, the Formosan languages form a paraphyletic group of the Austronesian languages because they consist of the nine branches of the Austronesian family that are not Malayo-Polynesian and are restricted to the island of Taiwan.[64]