Enlarge Kenya Chiefdom
Not to be confused with Paramount chieftain.

A paramount chief is the English-language designation for the highest-level political leader in a regional or local polity or country administered politically with a chief-based system. This term is used occasionally in anthropological and archaeological theory to refer to the rulers of multiple chiefdoms or the rulers of exceptionally powerful chiefdoms that have subordinated others. Paramount chiefs were identified by English-speakers as existing in Native American confederacies and regional chiefdoms, such as the Powhatan Confederacy and Piscataway Native Americans encountered by English colonists in the Chesapeake Bay area of North America.

More recently, Paramount Chief is a formal title created by British administrators during the 19th and 20th-century Colonial era and used in India, Africa and Asian colonies. They used it as a substitute for the word king to maintain that only the British monarch held that title.[1] Since the title "chief" was already used in terms of district and town administrators, the addition of "paramount" was made so as to distinguish between the ruling monarch and the local aristocracy.[1]

Khan, alternately spelled lowercase as khan[2] and sometimes spelled as Han, Xan, Ke-Han, Turkic: khān,[2][3] Mongolian: qāān,[3] Chinese: 可汗 or 汗, kehan or han) is an originally Central Asian title for a sovereign or military ruler, first used by medieval Turko-Mongol nomadic tribes living to the north of China. 'Khan' is first seen as a title in the Xianbei confederation[4] for their chief between 283–289[5] and was used as a state title by the Rouran confederation.[6] It was subsequently adopted by the Göktürks before Turkic peoples and the Mongols brought it to the rest of Asia. In the middle of the sixth century it was known as "Kagan – King of the Turks" to the Persians.[4]

It now has many equivalent meanings such as commander, leader, or ruler. The most famous khan was the Great Khan of Mongols: Genghis Khan. Another famous Manchu khan was Nurhachi. 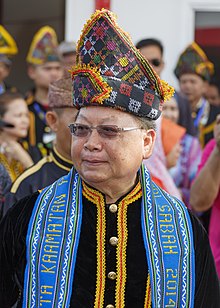 Huguan Siou is the paramount leader for the Kadazandusun Murut indigenous community in Sabah. The current and the second Huguan Siou is Joseph Pairin Kitingan. The office is near sacred and can be left vacant if no one is deemed worthy to hold the title.[7]