The Paraguay River (Río Paraguay in Spanish, Rio Paraguai in Portuguese, Ysyry Paraguái in Guarani) is a major river in south-central South America, running through Brazil, Bolivia, Paraguay and Argentina. It flows about 2,695 kilometres (1,675 mi)[2] from its headwaters in the Brazilian state of Mato Grosso to its confluence with the Paraná River north of Corrientes and Resistencia.

From the city of Puerto Bahia Negra, Paraguay, the river forms the border between Paraguay and Brazil, flowing almost due south before the confluence with the Apa River.

The Paraguay makes a long, gentle curve to the south-southeast before resuming a more south-southwesterly course, dividing the country of Paraguay into two distinct halves: the Gran Chaco region to the west, a largely uninhabited semi-arid region; and the eastern forested departments of the country, accounting for some 98% of the country's inhabitants. As such the river is considered perhaps the key geographical feature of the country with which it shares its name.

Some 400 kilometres (250 mi) after flowing through the middle of Paraguay, at the confluence with the Pilcomayo River and passing the Paraguayan capital city, Asunción, the river forms the border with Argentina, flowing generally south-southwesterly for another 275 kilometres (171 mi) before it reaches its end, joining with the Paraná River. 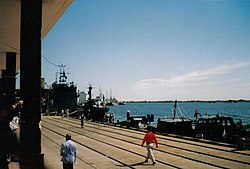 Deep water port on the River Paraguay in Asunción, Paraguay

The Paraguay River is the second major river of the Rio de la Plata Basin, after the Paraná River. The Paraguay's drainage basin, about 1,095,000 square kilometres (423,000 sq mi),[3] covers a vast area that includes major portions of Argentina, southern Brazil, parts of Bolivia, and most of the country of Paraguay. Unlike many of the other great rivers of the Rio de la Plata Basin, the Paraguay has not been dammed for hydroelectric power generation; for this reason it is navigable for a considerable distance, second only to the Amazon River in terms of navigable length on the continent. This makes it an important shipping and trade corridor, providing a much-needed link to the Atlantic Ocean for the otherwise landlocked nations of Paraguay and Bolivia. It serves such important cities as Asunción and Concepción in Paraguay and Formosa in Argentina.

The river is also a source of commerce in the form of fishing, and provides irrigation for agriculture along its route. As such it provides a way of life for a number of poor fishermen who live along its banks and make the majority of their income selling fish in local markets, as well as supplying a major source of sustenance for their families. This has created issues in large cities such as Asunción, where poverty-stricken farmers from the country's interior have populated the river's banks in search of an easier lifestyle. Seasonal flooding of the river's banks sometimes forces many thousands of displaced residents to seek temporary shelter until the waters recede from their homes. The Paraguayan military has been forced to dedicate land on one of its reserves in the capital to emergency housing for these displaced citizens. The river is a tourist attraction for its beauty.

The Paraguay River is the primary waterway of the 147,629-square-kilometre (57,000 sq mi) Pantanal wetlands of southern Brazil, northern Paraguay and parts of Bolivia. The Pantanal is the world's largest tropical wetland and is largely dependent upon waters provided by the Paraguay River.

Paraguay River in the Amolar Mountains, in Corumbá, Mato Grosso do Sul, Brazil.

Owing to its importance as a navigable waterway serving Brazil, Argentina, and Paraguay, the river has been the focus of commercial and industrial development. In 1997 the governments of the nations of the La Plata Basin proposed a plan under the Hidrovia Inter-Governmental Commission (CIH) agency to develop the rivers into an industrial waterway system to help reduce the costs of exporting goods from the area, in particular the soybean crop that the area has embraced. The plan entailed constructing more hydroelectric dams along some of the waterways, along with a massive effort to restructure the navigable waterways—most notably the Paraguay River—through dredging of the waterway, rock removal and channel restructuring.

Studies indicated that the proposed river engineering of the Paraguay would have a devastating impact on the Pantanal wetlands. An effort by the Rios Vivos coalition to educate people on the effects of the project was successful in delaying the project, and the nations involved agreed to reformulate their plan. The final plan is still uncertain, along with the effect it will have on the Pantanal and the ecology of the entire Río de la Plata basin. The controversy over whether or not the project will have a disastrous effect on the local ecology, as well as the potential economic gains, continues to this day.[citation needed]

The very clear waters of the Rio da Prata, part of the Paraguay River basin near Bonito, Brazil, is rich in fish, such as Brycon hilarii (yellowish) and Prochilodus lineatus (dark)

The peak of the flood season in the Paraguay River (measured at Corumbá) is delayed 4–6 months compared to the peak of the rainy season due to the slow passage of water through the Pantanal wetlands.[5] There are significant temperature variations depending on season. During the low water season, the water of the Paraguay River is relatively warm (typically above 27 °C or 81 °F) and clouded (Secchi depth typically less than 32 cm or 13 in), but in the flood season it is colder (typically 18–26.3 °C or 64.4–79.3 °F) and clearer (Secchi depth typically 26–130 cm or 10–51 in).[4] The upper part of the Paraguay River is warmer than the lower and generally its temperature does not fall below 22.5 °C (72.5 °F), although some upper Paraguay tributaries may fall below this.[4] 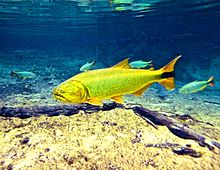 A golden dorado (foreground) and four Brycon hilarii (behind) in Rio da Prata, part of the Paraguay River basin near Bonito, Brazil

The Paraguay River ecoregion has high species richness with about 350 fish species, including more than 80 endemics.[6] About 80% of the fish species in the river are characiforms (tetras and allies) and siluriforms (catfish).[6] Several of these migrate up the Paraguay River to spawn, including Prochilodus lineatus and Pseudoplatystoma corruscans.[6] Unsurprisingly many species in the river are essentially of Paraná River Basin origin, but the fauna also has a connection with two Amazonian rivers, the Guaporé and Mamoré. While flowing in different directions, the Paraguay, Guaporé and Mamoré all have their source in the same region in central South America. Among the species shared between these are the black phantom tetra, an important fish in the aquarium industry,[7] and the golden dorado, which is important in the fishing industry.[8][9]