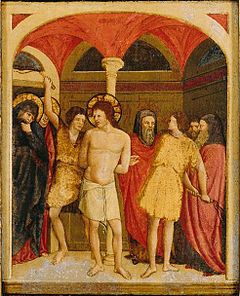 Paolo Schiavo, the pseudonym of Paolo di Stefano Badaloni (1397-1478) was a Florentine painter.

Born in Florence, Paolo Schiavo enrolled in the Arte dei Medici e Speziali (the guild of Doctors and Apothecaries, which was joined by Dante Alighieri too) in 1428. According to Vasari, he was a follower of Masolino.[1] Schiavo dedicated a lot of his later works to Masolino. Among his dedications were frescoes of the Virgin and Child Enthroned with Saints (1436), of The Crucifixion Adored by Nuns (1447-8) and of the Adoration of the Magi, the Annunciation and various saints. He made several other works, all of which bear his signature and their corresponding dates.[2]

In 1435 he went to Castiglione Olona with Masolino da Panicale where he realized the first section of the apse right wall.

He died in Pisa.

Frescoes by Schiavo adorn the chapel on the left in the church of San Michele a Castellaccio di Sommaia, near Florence.[2] 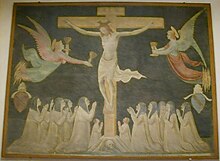