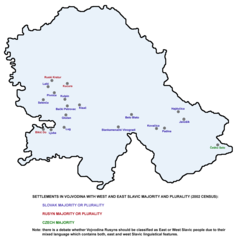 Rusyns in Pannonia, or simply Rusyns, or Ruthenians (Rusyn: Руснаци or Русини, Serbian: Русини, romanized: Rusini), are a regional minority subgroup of the Rusyns, an Eastern Slavic people. They are located in the Central European region of Pannonia, which today covers almost all of Hungary, the southern-most parts of Slovakia, northeast Croatia, a tiny sliver portion of northeast Slovenia, and the northern-most part of Serbia (Vojvodina).

Rusyns in Pannonia mostly live in the autonomous province of Vojvodina in Serbia. There are 14,246 declared ethnic Rusyns in Serbia (2011 census). The village of Ruski Krstur in the Kula municipality is the cultural centre of the Pannonian Rusyns. There is a considerable concentration of Rusyns in Novi Sad, where in 1820 the construction of St. Peter and Paul Greek Catholic parish church started and was subsequently completed in 1834/1837. Other villages with a Rusyn majority include Kucura in the Vrbas municipality, and Bikić Do in the Šid municipality. There are Pannonian Rusyn communities in Slavonia (Croatia), forming a majority in the village of Petrovci, Bogdanovci municipality, in Vukovar-Srijem county.

The population of Banat and Bačka was decimated in the Ottoman wars. Rusyns emigrated to today's Banat and Bačka regions alongside Germans, Hungarians and Slovaks from a region that, in modern times, comprises parts of eastern Slovakia and northwestern Hungary. This was part of an intensive colonization by the Austrian Empire of the region's rich, arable land, aimed at increasing state revenue through taxes.

The census of Kula municipality from 1746 shows for the first time three Rusyns — Janko and Petro Homa and Janko Makovicki.

The official date of Rusyn settlement in Vojvodina is January 17, 1751 when the administrator of Bačka Franc Josip de Redl signed a contract with Mihajlo Munkači from the village of Červenovo, in the county of Bereg, to bring 200 Rusyn families of Greek-Catholic rite from the upper Hungarian districts known as the "Upper-Land" (Горнїца) to Kerestur.[1] Kerestur was a Serbian settlement mentioned 1741 as ruined and abandoned, as the settlers had moved to Čelarevo. The same administrator signed another contract on May 15, 1763 with Petro Kiš from Kerestur to bring 150 Rusyn families of Greek Catholic rite from the same areas in the "Upper-Land" to Kocur.

As the population grew and arable land given to settlers by contract was limited, many families from Kerestur and Kocur decided to migrate to the town of Novi Sad in 1766 and 1767. Later, Rusyns settled in Šid and Vajska, and in the early 19th century in Vukovar and Ilok, now in modern-day Croatia. In Petrovci, also Croatia, Rusyns started settlement in 1833, and later in Bačinci in 1834.

The census from 1767 for the whole Bač-Bodroš county (which then was part of Habsburg Monarchy and today comprises Bačka region in Serbia and Hungary) shows about 2.000 Rusyns. The census from 1991 in the same area shows about 25.000 Rusyns. Currently, the number of Panonian Rusyns declines and is estimated to be about 15.000. The main reason for this is the increased number of Rusyns who decided to move to Canada.[2]

Rusyns are officially recognized as an autochthonous national minority in Croatia and, as such, they elect a special representative to the Croatian Parliament, shared with members of eleven other national minorities.[3]

Pannonian Rusyns consider their Rusyn variety to be a distinct language.

Rusyn is one of the six official languages of provincial administration in Vojvodina, while in Croatia it is officially used in two settlements.[4]