The Pan-African Congress gained the reputation as a peace maker for decolonization in Africa and in the West Indies. It made significant advance for the Pan-African cause. One of the demands was to end colonial rule and end racial discrimination, against imperialism and it demanded human rights and equality of economic opportunity. The manifesto given by the Pan-African Congress included the political and economic demands of the Congress for a new world context of international cooperation.

Colonial powers in Africa wanted native Africans to wait patiently for limited political concessions and better career opportunities. Due to their exclusion from the negotiations of the 1919 Treaty of Versailles — the most important of the peace treaties that brought World War I to an end — black ex-servicemen and educated urban classes became disillusioned. Because colonialism had been built on the foundation of capitalism, socialist ideas of equality and global collaboration appealed to these budding revolutionaries.

A letter from Jamaican writer and socialist Claude McKay to Leon Trotsky in 1922 refers to the experience of black soldiers:

They had been disillusioned with the European war, they kept on having frightful clashes with English and American soldiers, besides the fact the authorities treated them completely differently from the white soldiers... I was working at that time in London in a communist group. Our group provided the club of Negro soldiers with revolutionary newspapers and literature which had nothing.

In February 1919, the first Pan-African Congress was organized by W. E. B. Du Bois and Ida Gibbs Hunt, wife of US Consul William Henry Hunt, who was at that time working at the American consulate in Saint-Étienne, France.[6] Gibbs and Du Bois were seen as ambassadors of Pan-Africa.[7] Also, Gibbs acted as the primary translator at the Congress.[7] There were 57 delegates representing 15 countries, a smaller number than originally intended because British and American governments refused to issue passports to their citizens who had planned on attending.[8] Their main task was petitioning the Versailles Peace Conference held in Paris at that time. Among their demands were that:

Among the delegates were:[9]

Session in the Palais Mondial, Brussels, 1921

In 1921, the Second Pan-African Congress met in several sessions in London, Brussels and Paris, during August (28, 29, and 31) and September (2, 3, 5 and 6).[10] As W. E. B. Du Bois reported in The Crisis in November that year, represented at this congress were "26 different groups of people of Negro descent: namely, British Nigeria, Gold Coast and Sierra Leone; the Egyptian Sudan, British East Africa, former German East Africa; French Senegal, the French Congo and Madagascar; Belgian Congo; Portuguese St. Thomé, Angola and Mozambique; Liberia; Abyssinia; Haiti; British Jamaica and Grenada; French Martinique and Guadeloupe; British Guiana; the United States of America, Negroes resident in England, France, Belgium and Portugal, and fraternal visitors from India, Morocco, the Philippines and Annam."[11] There was an Indian revolutionary who took part, Shapurji Saklatvala, and a journalist from the Gold Coast named W. F. Hutchinson who spoke. This session of the Congress was the most focused for change of all the meetings thus far. At the London session, resolutions were adopted, later restated by Du Bois in his "Manifesto To the League of Nations":[12][13]

England, with all her Pax Britannic, her courts of justice, established commerce, and a certain apparent recognition of Native laws and customs, has nevertheless systematically fostered ignorance among the Natives, has enslaved them, and is still enslaving them, has usually declined even to try to train black and brown men in real self-government, to recognise civilised black folk as civilised, or to grant to coloured colonies those rights of self government which it freely gives to white men.

The only dissenting voices were these of Blaise Diagne and Gratien Candace, French politicians of African and Guadeloupean descent, who represented Senegal and Guadeloupe in the French Chamber of Deputies. They soon abandoned the idea of Pan-Africanism because they advocated equal rights inside the French citizenship and thought the London Manifesto declaration too dangerously extreme.

The Brussels sessions were hosted at the Palais Mondial.[14]

In 1923, the Third Pan-African Congress was held in London and in Lisbon. This meeting was totally unorganized. This meeting also repeated the demands such as self-rule, the problems in the Diaspora and the African-European relationship. The following was addressed at the meeting:

Before the Congress met in London, Isaac Béton of the French Committee wrote a letter to Du Bois, telling him that the French group would not be sending delegates. However, in one of the reports he published in the Crisis, Du Bois drew on words spoken by Ida Gibbs Hunt and Rayford Logan to imply that the French Committee had sent delegates. As long-time African-American residents of France, Hunt and Logan had travelled independently to the meeting, and Hunt and Béton were perturbed that Du Bois had implied they represented France.[15] 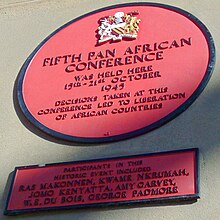 The commemorating plaque in Manchester

The Fifth Pan-African Congress was held in Manchester, United Kingdom, from 15–21 October 1945. It followed the foundation of the Pan-African Federation (PAF) in Manchester in 1944.[17] The Congress took place at the Chorlton-upon-Medlock Town Hall on the outskirts of the city centre. The building which was decorated with the flags of the Ethiopia, and Liberia and the Republic of Haiti. These three black nations were the only ones under-governance at the time.[18] The Lord Mayor of Manchester, Conservative, Alderman W.P. Jackson, opened the Congress at the afternoon session on October 15th. John McNair, secretary of the Independent Labour Party also addressed the Congress.[19]

Historian Hakim Adi writes in The 1945 Manchester Pan-African Congress Revisited that “The previous four Pan-African Congresses had been largely organised by the African-American writer and activist Dr W.E.B. Du Bois and the National Association for the Advancement of Coloured People (NAACP), based in the United States.” According to Adi, “The [Fifth] Congress was dominated by British-based organisations and activists" with Du Bois playing a minor role in the preparations.[20]

The Fifth Congress is widely viewed by commentators as the most significant, being held just months after the end of the World War II.The War had been fought in the name of freedom, however around the globe, millions of Africans and Afro-Diaspora populations lived under European colonial rule. Historian Marika Sherwood writes in her book Manchester and the 1945 Pan-African Congress that “In 1945, at the end of World War II, some 700 million people around the world lived under imperial rule. They were ‘subject people’, with no freedoms, no parliaments, no democracy, and no trade unions to protect workers.”[19]

Historian Christian Høgsbjerg writes in his essay Remembering the Fifth Pan African Congress that the aftermath of World War II gave rise to a "new mood of militancy among colonial Africans, Asians and West Indians."[21] According to Høgsbjerg, many felt betrayed after being promised movement towards self-government if they fought for the British and French empires during World War I - only to have such promises later denied. Høgsbjerg writes that "many were determined not to be fooled again.''[21] The Congress made demands for Independence as well as condemning imperialism, racial discrimination, and capitalism.[22]

George Padmore, Kwame Nkrumah and T. Ras Makonnen are viewed by commentators as the primary organisers of the Fifth Pan-African Congress.[19][21][23]

Historian Marika Sherwood writes in Manchester and the 1945 Pan-African Congress that “With the aid of the London-based League of Coloured Peoples, the PAF had asked organisations from the US, the West Indies, British West Africa, South Africa, Belgian Congo, Ethiopia, Somalia, Sudan and South and Central America to send representatives.” According to Sherwood, “unfortunately many of these organisations were unable to send delegates.”[19]

However, the Fifth Congress was unique in comparison to the four earlier Congresses. Historian Simon Katzenellenboggen comments that “Unlike the four earlier congresses, the fifth one involved people from the African Diaspora; not just Africans, but Afro-Caribbeans and Afro-Americans." Katzenellenboggen also points out that "There were a lot of people of African descent who were resident in Manchester that got involved. The 1945 Congress, although within the larger Pan-African movement that had started at the beginning of the century, was organised by people in Manchester, and they brought in the people from all over the world."[23]

Commentators estimate between 87-90 delegates in attendance at the Congress representing some 50 organisations, with a total of 200 audience members present.[23][21][19]

Marika Sherwood notes that "There were also eleven listed 'fraternal delegates', from Cypriot, Somali, Indian and Ceylonese (Sri Lankan) organisations, as well as the Women's International League and two British political parties, the Common Wealth Party and Independent Labour Party." According to Sherwood "Three unlisted Manchester 'fraternals' were Wilf Charles, Pat Devine and Len Johnson of the Communist Party. As far as known, of these fraternal delegates, only John McNair of the IPL and Surat Ali of the Federation of Indian Associates were allowed to address the delegates from the platform."[19]

Historian Saheed Adejumobi writes in The Pan-African Congresses, 1900-1945  that “While previous Pan-African congresses had been controlled largely by black middle-class British and American intellectuals who had emphasized the amelioration of colonial conditions, the Manchester meeting was dominated by delegates from Africa and Africans working or studying in Britain.”  Adejumobi notes that “The new leadership attracted the support of workers, trade unionists, and a growing radical sector of the African student population. With fewer African American participants, delegates consisted mainly of an emerging crop of African intellectual and political leaders, who soon won fame, notoriety, and power in their various colonized countries.”[24]

Notable delegates in attendance include:

Amongst the issues addressed at the conference were:

Archive material relating to the 1945 and 1955 Congresses are held at the Ahmed Iqbal Ullah Race Relations Resource Centre at Manchester Central Library.[26] Len Johnson's papers at the Working Class Movement Library has records and documents from the 1945 Congress.[27][28]

The significance of the Pan-African movement and the Fifth Congress

The people in Manchester were politically conscious and that was one of the reasons why it was selected as the venue for the fifth Pan-African congress. The fifth congress was organized by people of African origin living in Manchester. According to the Mancunian historian Simon Katzenellenboggen it has a great significance as it was an important step towards the end of those imperial powers in Africa. Unlike the four earlier congresses, the fifth one involved people from the African Diaspora, including Afro-Caribbeans and Afro-Americans. Manchester had a significant part to play in helping the African countries to march forward in their fight to independence.[23]