listen); 26 March 1893 – 21 August 1964) was an Italian politician and leader of the Italian Communist Party from 1927 until his death. He was nicknamed Il Migliore ("The Best")[1] by his supporters. In 1930 he became a citizen of the Soviet Union[2] and later he had a city in that country named after him: Tolyatti.

Togliatti was a founding member of the Communist Party of Italy (Partito Comunista d’Italia, PCI), and from 1927 until his death, he was the Secretary and the undisputed leader of the Italian Communist Party, except for the period from 1934 to 1938, during which he served as representative to the Comintern, the international organization of communist parties. After the dissolution of the Comintern in 1943 and the formation of the Cominform in 1947, he refused the post of Secretary General, offered to him directly by Stalin in 1951, preferring to remain at the head of the PCI.

From 1944 to 1945 Togliatti held the post of Deputy Prime Minister and from 1945 to 1946 he was appointed Minister of Justice in the governments that ruled Italy after the fall of Fascism. He was also a member of the Constituent Assembly of Italy.

Togliatti survived an assassination attempt in 1948, and died in 1964, during a holiday in Crimea on the Black Sea.

Palmiro Togliatti was born in Genoa into a middle-class family. His father Antonio was an accountant in the Public Administration, while his mother Teresa Vitale was a teacher.[3]

Togliatti's father's job forced the Togliattis to move frequently to different cities. Before his birth they moved from Turin to Genoa. He was named "Palmiro" because he was born on Palm Sunday; Togliatti's parents were observant Roman Catholics.

In 1908 he studied at the "Azuni" classics high school (classical lyceum) in Sassari, where he was recognised as the best student in the school.[5]

His father Antonio died on 21 January 1911 of cancer and the family ended up in poverty; but thanks to a scholarship, Togliatti was able to graduate from the University of Turin in law in 1917.

In 1914 Togliatti began his political life in the Italian Socialist Party prior to the First World War. He served as a volunteer army officer during the war, and was wounded in action and sent home to recuperate.

Returning at the end of the conflict, Togliatti was a part of the group around Antonio Gramsci's L'Ordine Nuovo paper in Turin, while working as a tutor.

Like the other founders of L'Ordine Nuovo, Togliatti was an admirer of the Russian Revolution and strongly supported the immediate creation of soviets in Italy. He believed that existing factory councils of workers could be strengthened so that they could become the basis of a communist coup.[6][7]

Initially, the newspaper, which was founded with union backing, focused on cultural politics, but in June 1919, the month following its founding, Gramsci and Togliatti pushed Tasca out and re-focused as a revolutionary voice.[8] The newspaper reached a circulation of 6,000 by the end of the year and its reputation was heightened by its support of the April 1920 general strike, which the Socialist Party and the affiliated General Confederation of Labour did not support it.[9] On 1 January 1921 the paper began to be published daily.[10] 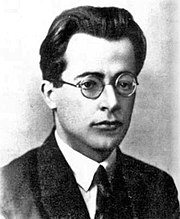 Togliatti was a member of the Communist Faction of the PSI, which was part of the Communist International, commonly known as the Comintern. On 21 January 1921, following a split in the Socialist Party on their 17th Congress in Livorno, he was one of the founders of the Communist Party of Italy. The PCdI was formed by L'Ordine Nuovo group led by Gramsci and the "culturalist" faction led by Angelo Tasca.[11]

In 1923, some members of the party were arrested and put on trial for "conspiracy against the State". This allowed the intense activity of the Communist International to deprive the party's left wing of authority and give control to the minority centre which had aligned with Moscow. In 1924 and 1925, the Comintern began a campaign of "Bolshevisation" which forced each party to conform to the discipline and orders of Moscow.[citation needed]

In October 1922, Benito Mussolini, leader of the National Fascist Party, took advantage of a general strike by workers and announced his demands to the government to give the Fascist Party political power or face a coup. With no immediate response, a small number of Fascists began a long trek across Italy to Rome which was called the March on Rome, claiming to Italians that Fascists were intending to restore law and order. Mussolini himself did not participate until the very end of the march, with Gabriele d'Annunzio being hailed as leader of the march, until it was revealed that he had been pushed out of a window and severely wounded in a failed assassination attempt. This deprived him of the possibility of leading the actual coup d'état orchestrated by an organization he himself had founded.

The Fascists, under the leadership of Mussolini, demanded Prime Minister Luigi Facta's resignation and that Mussolini be named Prime Minister. Although the Italian Army was far better armed than the Fascist paramilitaries, the Italian government under King Victor Emmanuel III faced a political crisis. The King was forced to choose which of the two rival movements in Italy would form the government: Mussolini's Fascists, or the anti-monarchist Italian Socialist Party. He selected the Fascists and appointed Mussolini new Prime Minister.[12][13]

In August 1923 Mussolini pushed through Parliament a new electoral law, the Acerbo Law, which assigned two-thirds of the seats to the list that had exceeded 25% of the votes. Togliatti wrote that "fascism will, gained power, dispersing the proletarians aggregates, prevent their unification on any terrain and cause a unification around it instead of the bourgeois political groups.[14]

In the 1924 general election the National List of Mussolini (an alliance with Liberals and Conservatives) used intimidation tactics,[15] resulting in a landslide victory and a subsequent two-thirds majority; while the Communist Party gained only 3.74% of votes and 19 seats.

In 1926, when the party was banned by the Italian Fascist government in 1926, Amedeo Bordiga and Gramsci were arrested and imprisoned on the island of Ustica. Togliatti was one of few leaders not to be arrested, as he was attending a meeting of the Comintern in Moscow.

In 1927, Togliatti was elected General Secretary in place of Gramsci.

In 1935, under the nom de guerre Ercole Ercoli, he was named member of the secretariat of the Comintern. In 1939, he was arrested in France: released, he moved to the Soviet Union, and remained there during World War II, broadcasting radio messages to Italy, in which he called for resistance to Nazi Germany and the Italian Social Republic.

Secretary of the Italian Communist Party 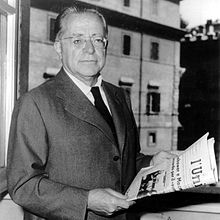 Togliatti with a copy of L'Unità newspaper, in 1950s.

In 1944 Togliatti returned from Moscow to Italy,[16] and led his PCI and other political forces to the so-called Svolta di Salerno, the "Salerno Turn". This was a compromise between antifascist parties, the monarchy and prime minister Pietro Badoglio to set up a government of national unity and to postpone institutional questions. Togliatti also founded a political journal, Rinascita, following his return to Italy in 1944 which he edited until his death.[16] The PCI committed to supporting democracy and to abandon the armed struggle for the cause of Socialism. In effect, the turn moved the party to the right, in contrast with many demands from within; it also meant the disarmament of those members of the Italian resistance movement that had been organized by the PCI (the Garibaldi Brigades). Togliatti served from December 1944 as Deputy Prime Minister and then from June 1945 as Justice Minister.

After having been minister without portfolio in the Pietro Badoglio government, he acted as vice-premier under Alcide De Gasperi in 1945. In opposition to the dominant line in his own party, he voted for the inclusion of the Lateran Pacts in the Italian Constitution. At the 1946 general election, held at the same time as the Constitutional Referendum won by republican supporters, the PCI obtained 19% of the votes and 104 seats in the new Constituent Assembly.

Togliatti during a Communist rally.

Communist ministers were evicted during the May 1947 crisis. The same month, Maurice Thorez, head of the French Communist Party (PCF), was forced to quit Paul Ramadier's government along with the four other communist ministers. As in Italy, the PCF was very strong, taking part in the Three parties alliance (Tripartisme) and scoring 28.6% at the November 1946 elections.

In 1948, Togliatti led the PCI in the first democratic election after World War II.[17] He lost to the Christian Democrat party (DC – Democrazia Cristiana) after a highly confrontational campaign in which the United States, viewing him as a Cold War enemy, played a large part.[18] Allied with the PSI in the Popular Democratic Front, the left-wing achieved 31% of the votes.

On 14 July 1948, Togliatti was shot three times, being severely wounded by Antonio Pallante, a strongly anti-communist fascist student[citation needed]; his life hung in the balance for days and news about his condition was uncertain, causing an acute political crisis in Italy (which included a general strike called by the Italian General Confederation of Labour).[19] 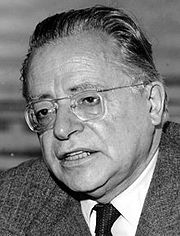 Under his leadership, the PCI became the second largest party in Italy, and the largest non-ruling communist party in Europe. Although permanently in the opposition at the national level during Togliatti's lifetime, the party ran many municipalities and held great power at the local and regional level in certain areas.

In 1953, he fought against the so-called "cheat or swindle law", an electoral legislation passed by the Christian Democracy-led majority of the time, which aimed at using first past the post to augment the center-right's power. Ultimately, the law was to prove of no use for the government in the elections of that year, where Togliatti's PCI won 22.6% of the vote. It was repealed in November 1953.

Despite his close relationship with the Soviet Union, Togliatti's leadership remained unscathed after the 1956 Hungarian Revolution (which was in most countries a cause for major conflicts within the left). He developed and named the polycentrism theory (unity in diversity within the communist parties in all countries). In the 1958 elections, the number of Communist votes was still on the rise. In the 1963 elections, the PCI gained 25.2% of the votes but again failed to reach a relative majority. 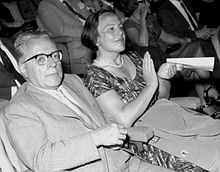 Togliatti and Nilde Iotti, before 1964.

Togliatti died as a result of cerebral haemorrhage[20] while vacationing with his companion Nilde Iotti in Yalta, then in the Soviet Union. According to some of his collaborators, Togliatti was traveling to the Soviet Union to give his support to Leonid Brezhnev's election as Nikita Khrushchev's successor at the head of Communist Party of the Soviet Union. His favourite pupil, Enrico Berlinguer, was later elected as his successor to the National Secretary of the PCI position, though Berlinguer's time in office saw the rejection of key policies advocated by Togliatti.

The Russian city of Stavropol-on-Volga, where Togliatti had been instrumental in establishing the AutoVAZ (Lada) automobile manufacturing plant in collaboration with Fiat, was renamed Tolyatti (as transliterated from Тольятти, the Russian spelling of his name) in his honor in 1964, after his death.

Agarossi and Zaslavsky (2011) argue that Togliatti and the other leaders of the PCI were fundamentally subservient to Stalin, and did their best to promote Soviet interests. They argue Togliatti was above all a Stalinist, and that he remained one for years after Stalin died in 1953 and the Soviet Union had repudiated much of his legacy. They argue that it was Stalin who ordered Togliatti to play a moderating role in Italian politics because the time was not yet ripe for a showdown with capitalism. Agarossi and Zaslavsky rely not only on Togliatti's papers but those of the Kremlin, especially the highly detailed reports sent in by the Soviet ambassador in Rome. Stalin forced the PCI to reject and work against the Marshall Plan, despite the loss of much support from Italian voters who wanted the American aid.[21]

One of the main town squares in the Croatian city of Rijeka (Italian: Fiume) was named after Togliatti while Croatia was part of SFR Yugoslavia, until it was finally renamed to Jadranski trg (Adriatic Plaza) in 1994.