Palasë (definite Albanian form: Palasa; Albanian pronunciation: [paˈlasə] or [paˈlasa]; Greek: Παλάσα, Palasa) also Paljasa,[1] is a village close to the Llogara National Park, on the Albanian Riviera. It is located in the municipality of Himarë (13 kilometres from the town), in Vlorë County, Albania.[2] The inhabitants of Palasë speak mainly a variant of the Himariote Greek dialect, and partly the Tosk Albanian dialect.[3]

In 1720, the villages of Himara, Palasa, Ilias, Vuno, Pilur and Qeparo refused to submit to the Pasha of Delvina.[9]

Until the 1750s Himarë was composed of more than 50 villages,[10] but by the end of the 1780s it comprised only 16, situated by the seashore from Saranda to Palasë.[11] Later on, with Ali Pasha's defeat, the region of Himara shrunk to only seven villages. In September 1916, the provinces of Himarë and Tepelenë became part of the Vlorë prefecture and were placed under the control of the Italian armed forces. The city of Himarë became the official capital of the region and was responsible for the administration of the traditionally Orthodox coastal villages of Palasë, Dhërmi, Kudhës, Qeparo, Vuno and Iljas.[12] However each village retained its own identity, despite falling under the municipality of Himarë.

The village is located several kilometres northwest of the town of Dhërmi, and is accessed via the main road leading out of the town. The Llogara Pass and Çika Mountain are nearby. The Thunderbolt Mountains, the western chain of the Ceraunian Mountains, enclose the area on its northern and northeastern side. The area opens up on its southwestern side with the mountain of Çika and descends towards the Ionian coast, with the Greek Islands of Othonas and Corfu in the distance.

Coastline. The village can be seen to the left of the picture. Further onwards to the right is Dhërmi

The village contains narrow stone roads and quaint white houses and is built around a 400-year-old platanus (plane tree), which is central to village life and the pride of the village. Geologically the terrain belongs to the western part of the Ionian Tectonic plate.[13] This section of the coastline is referred to by geologists as the Palasë-Butrint coastline. Palasë's beach is 1.5 kilometres in length.[14]

North of Palasë, is located a small bay, named Grammata ('letters' in Greek), accessible only by sea, with the surrounding cliffs containing various epigraphs, texts and symbols, perhaps carved out by sailors.[15]

The inhabitants of Palasë are bilingual as they mainly speak a variant of the Himariote Greek dialect, and partly the Tosk Albanian dialect.[3] 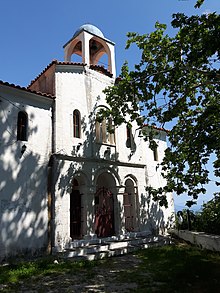