The Palácio do Planalto (Portuguese pronunciation: [paˈlasju du plaˈnawtu]) is the official workplace of the President of Brazil.[1] It is located in the national capital of Brasília. The building was designed by architect Oscar Niemeyer and inaugurated on April 21, 1960. It has been the workplace of every Brazilian president since Juscelino Kubitschek. It is located at the Praça dos Três Poderes (Three Powers Plaza), to the east of the National Congress and across from the Supreme Federal Court.

It is one of the official palaces of the Presidency, along with the Palácio da Alvorada, the official residence. Besides the President, a few high advisers also have offices in the Planalto, including the Vice President and the Chief of Staff; the other ministries are laid along the Ministries Esplanade. As the seat of government, the term Planalto is often used as a metonym for the executive branch of the federal government. Coordinates: 15°47′57″S 47°51′39″W﻿ / ﻿15.79917°S 47.86083°W﻿ / -15.79917; -47.86083

The presidential palace was a major feature of plan for the newly established federal capital, Brasília. Oscar Niemeyer was chosen as the architect of the Palácio do Planalto and the building's construction, led by Construtora Rabello S.A., began on July 10, 1958. The Executive Office was temporarily headquartered at the Catetinho, on the outskirts of Brasília, during construction.

The palace was officially inaugurated on April 21, 1960, by President Juscelino Kubitschek. It was one of the first buildings inaugurated in the new capital city, along with the National Congress and the Supreme Federal Court. The inauguration ceremony was attended by several heads of state and attracted thousands of spectators,[1] as it symbolized the transfer of the capital city from Rio de Janeiro to the center of the country.

The palace owes its name to the Brazilian Highlands (the term planalto meaning highland), specifically the Brazilian Central Plateau, where Brasília is located.

View from the garden

During the restoration process, the Executive Office was transferred temporarily to the Centro Cultural Banco do Brasil (English: Bank of Brazil Cultural Center) and to the Itamaraty Palace.[5]

The ramp leading to the Palácio do Planalto and the parlatorium (speaker's platform) in the background.

The presidential palace was a major feature of Costa's plan for the newly established capital city. Niemeyer's idea was to project an image of simplicity and modernity using fine lines and waves to compose the columns and exterior structures.[1] The longitudinal lines of the palace are kept by a sequence of columns whose design is a variation of those at the Palácio da Alvorada, although they were arranged transversely to the body of the building. The palace's façade is also composed by two strong elements: the ramp leading to the hall and the parlatorium (speaker's platform), from where the president and foreign heads of state can address the public at the Three Powers Plaza.[6]

The Palace has an area of 36,000 square metres (390,000 sq ft).[1] The main building has four floors above ground and one floor underground.[1] The heliport is located by the north façade of the building.

The first floor consists of the main reception area, access control and security, entrance hall and press office.[6] The large entrance hall is used frequently for temporary exhibitions on themes related to the federal government's programs. The hall features a sculpture by Franz Weissman and three sculptures by Zezinho de Tracunhaém. Also located on the first floor is the Presidential Gallery, housing the official portraits of the former Presidents of Brazil.[6]

The Supreme Meeting Room, located on the second floor of the Palace.

The second floor houses the East, Noble and West rooms, as well as the Supreme Meeting Room and Press Secretariat.[6] The East Room is where the President signs decrees and other pieces of legislation usually correlated to national topics. The Noble Room, also called the Mirror Hall, is the largest in the palace. It is used for large ceremonies, with a capacity to hold 1,000 guests. The highlights in this hall are Haroldo Barroso's sculpture Evoluções and Djanira da Motta e Silva's painting Os Orixás. The West Room was designed for medium-sized events, with a capacity to hold from 300 to 500 people. Due to its ample size and generous ceiling height, it is primarily used for events based on international themes. A large panel created by Roberto Burle Marx decorates the area. The Supreme Meeting Room was built in 1990 and is normally used for ministerial, government and presidential meetings.[6] 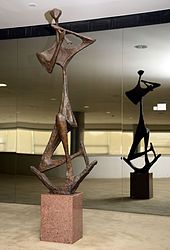 The Presidential Office, on the third floor, after restoration (as decorated during the administration of Luiz Inácio Lula da Silva).

The third floor houses the President's office and offices of his or her senior staff.[6] It also houses the mezzanine, a large area composed of waiting rooms and a circulation area between the Noble Room, the presidential office and the offices of the senior advisors. The waiting rooms are decorated with furniture by Sergio Rodrigues and Oscar Niemeyer, and paintings by Emiliano Di Cavalcanti, Firmino Saldanha, Frans Krajcberg, Geraldo de Barros and Frank Schaeffer. The bronze sculpture called O Flautista, by Bruno Giorgi, also ornaments the area.[6]

The President's office consists of three separate environments: office, meeting room and guest room.[6] The President's office is decorated with modernist Brazilian furniture dating from the 1940s to the 1960s, and silverware from the Catete Palace. The highlights in this room are two large paintings by Djanira da Motta e Silva: Colhendo Bananas and Praia do Nordeste. The meeting room is used for private meetings between the President and members of her direct staff. The guest room is used for formal meetings between the President and foreign heads of state and government.[6]

The fourth floor contains a large lounge area and the offices of senior government officials, including the Chief of Staff and the Chief of the Institutional Security Cabinet.[1] The lounge area was created during the 2010 restoration and is decorated with modernist Brazilian furniture from the 1960s. Highlights in the lounge include: a tapestry by Alberto Nicola; a draft of Tiradentes' bust, by Bruno Giorgi; and Cena Indígena, by Giovanni Oppido. Two large panels by Athos Bulcão are also seen on the side walls that lead to the lounge.[6] 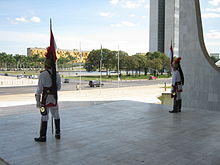 The Independence Dragoons stand guard outside the Palácio do Planalto.

The Palace is open to public visitation on Sundays, from 9:30 am to 2 pm.[7] Guided tours last 20 minutes. During the week, access to the building is restricted to authorized personnel. It is difficult to see the President, as they are often escorted into the Palace through the north entrance or arrives by helicopter. The ramp in front of the Palace is only used during special ceremonies, such as presidential inaugurations and state visits by foreign heads of state and government.

The building is protected by the Presidential Guard Battalion and by the 1st Guards Cavalry Regiment ("Independence Dragoons"), of the Brazilian Army. The ceremonial guard sentry duties are rotated among those two units every six months, and a change of the guard ceremony takes place to mark the rotation.