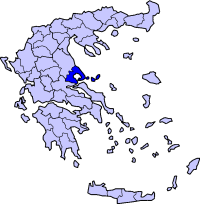 The Pagasetic Gulf (Greek: Παγασητικός κόλπος, romanized: Pagasitikós kólpos) is a rounded gulf (max. depth 102 metres) in the Magnesia regional unit (east central Greece) that is formed by the Mount Pelion peninsula. It is connected with the Euboic Sea. The passage into the Euboic Sea is narrow and is about 4 km.

Its main port is Volos.

The gulf is named after its historic major port, Pagasae, from which mythology says that Jason built his ship the Argo and from which he sailed on his adventurous voyage.[1]

The gulf's name in Latin was Pagasaeus Sinus.[2]

Places within the gulf

The gulf took its name from the ancient city of Pagasae.