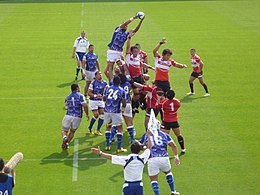 The Pacific Nations Cup is an international rugby union competition held between three Pacific nations: Fiji, Samoa and Tonga. The 2019 edition of the tournament will also include the national teams of Canada, Japan and United States. First held in 2006, the tournament is intended to strengthen the Tier 2 rugby nations by providing competitive test matches in a tournament format.

The tournament generally occurs every year in the June mid-year international test window. The tournament was played mainly throughout June, with the last round in early July. The revised tournament begins in May due to pre-existing Test commitments and concludes in late June.

The Pacific Nations Cup was funded as an International Rugby Board (IRB) tournament which was part of the $US50 million, three-year, global strategic investment programme launched in August 2005. The competition was aimed at developing the Pacific rim sides in the second tier of the rugby nations: Fiji, Japan, Samoa and Tonga. The Junior All Blacks were also invited to compete, who are New Zealand's second XV. "The IRB Pacific 5 Nations is a tournament that will provide more certainty for Fiji, Japan, Samoa and Tonga in terms of regular high level Test match rugby, while also providing a high level of competition for the Junior All Blacks," said Mark Egan, the IRB's Head of Rugby Services.[1]

In the first year only it was called the IRB Pacific Five Nations and did not include Australia. Australia had been invited to take part in the inaugural 2006 tournament but decided against sending a team stating that they wanted to focus on their domestic competition. The inaugural tournament kicked off 3 June 2006 and was played in a round-robin format, with some games being held in Australia. The Junior All Blacks won all of their matches en route to winning the 2006 tournament. The inaugural tournament was a success in providing a platform for Pacific nations and Japan in gaining valuable exposure.

Australia A joined an expanded competition for the 2007 season. The inclusion of Australia A meant that the tier 2 nations would have an even greater number of matches in the buildup to the 2007 Rugby World Cup. For Australia, it provided a stepping stone for Wallaby selection. Following the 2008 tournament, however, the ARU announced Australia A would not play in 2009 due to the current economic environment.[2] Australia has not participated since then.

In January 2013, the IRB announced that both the USA and Canadian rugby teams would be joining the 2013 competition on a permanent basis. For the first time, the reigning champion Samoan team did not compete as they took part in a competition in South Africa.[4]

The World Rugby Pacific Nations Cup was downscaled for 2016 and 2017 with these two editions featuring only Fiji, Samoa and Tonga. The sides from Canada, Japan and United States played in their respective regional qualifiers for the 2019 Rugby World Cup. As part of the Oceanian qualification, places at the 2019 Rugby World Cup were awarded to the two top teams of the 2016 and 2017 PNC (on aggregate), whereas the bottom team played a repechage match against the second best Rugby Europe Championship team. Georgia was invited for the 2018 tournament hosted in Suva.[5]

For 2019, Canada, Japan and the United States returned to the tournament, serving as a prelude to the 2019 Rugby World Cup. Japan won without losing a match.[6]

The teams in the Pacific Nations Cup and their finishing positions are as follows:

^ * The 2014 tournament was split into conferences without crossover matches or finals. Samoa and Japan won their respective conference titles.[7][8] 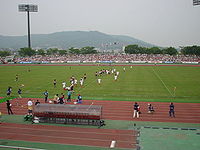 On 20 June 2008 the International Rugby Board announced that regional financial institution ANZ had agreed to become presenting sponsor of the competition, as well as the FORU Oceania Cup and the Pacific Rugby Cup.[9]

^a The 2014 tournament was split into conferences with Samoa and Japan winning their respective conference titles.[7][8]

^b The totals cited from statbunker.com include classification finals from 2015 which were not regular season games. While their match data (P W D L PF PA PD) is accurate, the statbunker figures for bonus points and log points are unreliable and those stats are not included in the table above.

The following tables contain points and tries scored in the Pacific Nations Cup.

Below is a table listing all the venues that have been used in the tournaments, listed with the number of matches each venue has hosted annually and historically: