Pacaya is an active complex volcano in Guatemala, which first erupted approximately 23,000 years ago and has erupted at least 23 times since the Spanish invasion of Guatemala. Pacaya rises to an elevation of 2,552 metres (8,373 ft).[1] After being dormant for over 70 years, it began erupting vigorously in 1961 and has been erupting frequently since then. Much of its activity is Strombolian, but occasional Plinian eruptions also occur, sometimes showering the area of the nearby Departments with ash.[1]

Pacaya is a popular tourist attraction. Pacaya lies 30 kilometers (19 miles) southwest of Guatemala City and close to Antigua.[2] The volcano sits inside the Escuintla Department.[2][3]

So far, the last activity reported has been the eruption that peaked on March 2, 2014, causing ash to rain down in Guatemala City, Antigua, and Escuintla.

The Pacaya volcano is a part of the Central American Volcanic Arc, a chain of volcanoes stretching from the northwest to the southeast along the Pacific coast of Central America, formed by the tectonic subduction of the Cocos Tectonic Plate beneath the Caribbean Plate. Pacaya lies on the southern edge of a sizable volcanic caldera formed in the Pleistocene age which contains Lago de Amatitlán. This caldera has been the source of at least nine very large explosions over the past 300,000 years, erupting a total of about 70 cubic kilometres (17 cu mi) of magma.[1][4]

After the last caldera-forming eruption 23,000 years ago several smaller vents within and around the caldera have seen eruptive activity. Pacaya is the largest post-caldera volcano, and has been one of Central America's most active volcanoes over the last 500 years. It has erupted at least 23 times since the Spanish conquest,[1][5] producing basalt and basaltic andesite.[6]

About 1,100  years ago, the volcano's edifice collapsed, causing a huge landslide. Deposits from the landslide travelled about 25 kilometres (16 mi) from the volcano down to the Pacific coastal plain. The landslide left a large crater, within which the current active cone has grown. The presence of a magma chamber at shallow depths beneath Pacaya means that distortion of the cone leading to instability and future landslides remains a hazard to the surrounding areas.[1] 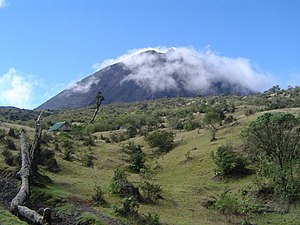 With its almost continuous activity, the volcano has been a popular location for tourism. Pacaya is easily accessible from Guatemala City and from Antigua. The volcano and surrounding area now lie within the Pacaya National Park, which was created to supervise and protect tourism in this region. The Pacaya Park generates its income from tour groups who are charged a small fee to enter the park.[citation needed]

During 2006, a slight increase in Pacaya's volcanic activity brought about the creation of several lava rivers that slowly flow down its slope. Word about these phenomena spread, and local tourism increased significantly.[citation needed]

On May 27, 2010, the Pacaya volcano erupted, followed by several tremors. At approximately 20:00 hours there was a strong eruption ejecting debris and ash columns up to 1,500 metres (4,900 ft). Ash rained down in many Guatemalan cities to the northwest of the volcano, including Guatemala City.[7] The volcanic ash fall pelted Guatemala City, and the international airport, La Aurora. The National Coordinator for Disaster Reduction (CONRED) declared a red alert for the communities near the volcano and recommended the evacuation of some of them. Noti7 reporter Anibal Archila, one of the first to cover the event, was reportedly killed by volcanic debris.[8]

President Álvaro Colom declared a state of calamity in the region adjacent to the volcano, and the Ministry of Education closed the schools in the departments of Guatemala, Escuintla, and Sacatepequez. Heavy rainfall from Tropical Storm Agatha worsened the emergency situation, causing lahars, landslides and widespread flooding across the country. However, people working in coffee fields considered the rain brought by the storm to be helpful, removing ash from their trees.[9]