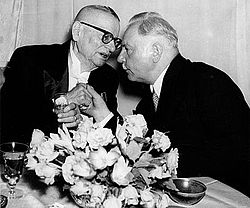 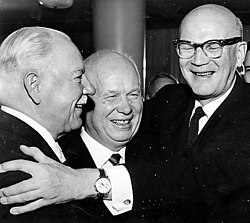 Chairman of the Presidium of the Supreme Soviet, Marshal Kliment Voroshilov, General Secretary of the Central Committee of the CPSU Nikita Khrushchev, and President of Finland Urho Kekkonen meeting in Moscow in November 1960.

The Paasikivi-Kekkonen doctrine was a foreign policy doctrine established by Finnish President Juho Kusti Paasikivi and continued by his successor Urho Kekkonen, aimed at Finland's survival as an independent sovereign, democratic, and capitalist country in the immediate proximity of the Soviet Union.

The principal architect of Finland's postwar foreign policy of neutrality was Juho Kusti Paasikivi, who was president from 1946 to 1956.[1] Urho Kekkonen, president from 1956 until 1982, further developed this policy, stressing that Finland should be an active rather than a passive neutral.

Finland and the Soviet Union signed the Paris Peace Treaty in February 1947, which in addition to the concessions of the Moscow Peace Treaty provided for:

In April 1948, Finland signed an Agreement of Friendship, Cooperation, and Mutual Assistance with the Soviet Union.[2] Under this mutual assistance pact, Finland was obligated, with the aid of the Soviet Union, if necessary, to resist armed attacks by "Germany or its allies" (i.e., NATO) against Finland or against the Soviet Union through Finland. At the same time, the agreement recognized Finland's desire to remain outside great-power conflicts. This agreement was renewed for 20 years in 1955, in 1970, and again in 1983.[1] This allowed Finland to retain independence in internal affairs, e.g. a multiparty parliamentary system, and not to join the Eastern Bloc. However, joining NATO or other overt alliance with the West was out of question[2] and foreign policy was often limited.

Contemporary Finns often criticized the Paasikivi-Kekkonen doctrine as tending towards a "liturgy" of good relations. Both countries were militarily prepared. However, international trade was active, in the framework of bilateral trade. Furthermore, the policy was heavily tied to the person of President Kekkonen, who consequently exploited his position as a "guarantor of Soviet relations" against political opponents. Outright censorship, official as well as unofficial, was employed for films and other works considered explicitly anti-Soviet, such as The Manchurian Candidate or The Gulag Archipelago, although political freedoms were not otherwise coercively limited.

The Finns responded cautiously in 1990–91 to the decline of Soviet power and the USSR's subsequent dissolution. They unilaterally abrogated restrictions imposed by the 1947 and 1948 treaties with the exception of a ban on acquiring nuclear weapons, joined in voicing Nordic concerns over the coup against Soviet leader Mikhail Gorbachev, and gave increasing unofficial encouragement to Baltic independence.

At the same time, by replacing the Soviet-Finnish mutual assistance pact with treaties on general cooperation and trade, Finns put themselves on an equal footing while retaining a friendly bilateral relationship. Finland now is boosting cross-border commercial ties and touting its potential as a commercial gateway to Russia. It has reassured Russia that it will not raise claims about the formerly Finnish territory ceded after the Continuation War (though a small but vocal minority of the people disagrees), and continues to reaffirm the importance of good bilateral relations.