Anglicanism Anglican sacraments Help:Maintenance template removal
Not to be confused with the twentieth-century Oxford Group or the Oxfordian theory of Shakespeare authorship. 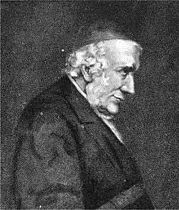 The Oxford Movement was a movement of High Church members of the Church of England which eventually developed into Anglo-Catholicism. The movement, whose original devotees were mostly associated with the University of Oxford, argued for the reinstatement of some older Christian traditions of faith and their inclusion into Anglican liturgy and theology. They thought of Anglicanism as one of three branches of the "one holy, catholic, and apostolic" Christian church. By the 1840s many participants decided that the Anglican Church lacked grace, and converted to Roman Catholicism.

The movement's philosophy was known as Tractarianism after its series of publications, the Tracts for the Times, published from 1833 to 1841. Tractarians were also disparagingly referred to as "Newmanites" (before 1845) and "Puseyites" (after 1845) after two prominent Tractarians, John Henry Newman and Edward Bouverie Pusey. Other well-known Tractarians included John Keble, Charles Marriott, Richard Froude, Robert Wilberforce, Isaac Williams and William Palmer.

In the early nineteenth century, different groups were present in the Church of England. Many, particularly in high office, saw themselves as latitudinarian (liberal) in an attempt to broaden the Church's appeal. Conversely, many clergy in the parishes were Evangelicals, as a result of the revival led by John Wesley. Alongside this, the universities became the breeding ground for a movement to restore liturgical and devotional customs which borrowed heavily from traditions before the English Reformation as well as contemporary Roman Catholic traditions.[1]

The immediate impetus for the Tractarian movement was a perceived attack by the reforming Whig administration on the structure and revenues of the Church of Ireland (the established church in Ireland), with the Irish Church Temporalities Bill (1833). This bill not only legislated administrative changes of the hierarchy of the church (for example, with a reduction of bishoprics and archbishoprics) but also made changes to the leasing of church lands, which some (including a number of Whigs) feared would result in a secular appropriation of ecclesiastical property. John Keble criticised these proposals as "National Apostasy" in his Assize Sermon in Oxford in 1833. The Tractarians criticised theological liberalism. Their interest in Christian origins caused some of them to reconsider the relationship of the Church of England with the Roman Catholic Church.

The Tractarians postulated the Branch Theory, which states that Anglicanism along with Orthodoxy and Roman Catholicism form three "branches" of the historic Catholic Church. Tractarians argued for the inclusion of traditional aspects of liturgy from medieval religious practice, as they believed the church had become too "plain". In the final tract, "Tract 90", Newman argued that the doctrines of the Roman Catholic Church, as defined by the Council of Trent, were compatible with the Thirty-Nine Articles of the 16th-century Church of England. Newman's eventual reception into the Roman Catholic Church in 1845, followed by Henry Edward Manning in 1851, had a profound effect upon the movement.[2]

Apart from the Tracts for the Times, the group began a collection of translations of the Church Fathers, which they termed the Library of the Fathers. The collection eventually comprised 48 volumes, the last published three years after Pusey's death. They were issued through Rivington's company with the imprint of the Holyrood Press. The main editor for many of these was Charles Marriott. A number of volumes of original Greek and Latin texts was also published. One of the main contributions that resulted from Tractarianism is the hymnbook entitled Hymns Ancient and Modern which was published in 1861. 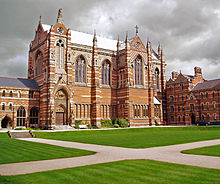 Keble College, Oxford, founded in 1870, was named after John Keble, a Tractarian, by the influence of Edward Pusey, another Tractarian

The Oxford Movement resulted in the establishment of Anglican religious orders, both of men and of women. It incorporated ideas and practices related to the practice of liturgy and ceremony to incorporate more powerful emotional symbolism in the church. In particular it brought the insights of the Liturgical Movement into the life of the church. Its effects were so widespread that the Eucharist gradually became more central to worship, vestments became common, and numerous Roman Catholic practices were re-introduced into worship. This led to controversies within churches that resulted in court cases, as in the dispute about ritualism.

Partly because bishops refused to give livings to Tractarian priests, many of them began working in slums. From their new ministries, they developed a critique of British social policy, both local and national. One of the results was the establishment of the Christian Social Union, of which a number of bishops were members, where issues such as the just wage, the system of property renting, infant mortality and industrial conditions were debated. The more radical Catholic Crusade was a much smaller organisation than the Oxford Movement. Anglo-Catholicism – as this complex of ideas, styles and organisations became known – had a significant influence on global Anglicanism.

End of Newman's involvement and receptions into Roman Catholicism

One of the principal writers and proponents of Tractarianism was John Henry Newman, a popular Oxford priest who, after writing his final tract, "Tract 90", became convinced that the Branch Theory was inadequate. Concerns that Tractarianism was a disguised Roman Catholic movement were not unfounded; Newman believed that the Roman and Anglican churches were wholly compatible. He was received into the Roman Catholic Church in 1845 and was ordained a priest of the Church the same year. He later became a cardinal (but not a bishop). Writing on the end of Tractarianism as a movement, Newman stated:

I saw indeed clearly that my place in the Movement was lost; public confidence was at an end; my occupation was gone. It was simply an impossibility that I could say any thing henceforth to good effect, when I had been posted up by the marshal on the buttery-hatch of every College of my University, after the manner of discommoned pastry-cooks, and when in every part of the country and every class of society, through every organ and opportunity of opinion, in newspapers, in periodicals, at meetings, in pulpits, at dinner-tables, in coffee-rooms, in railway carriages, I was denounced as a traitor who had laid his train and was detected in the very act of firing it against the time-honoured Establishment.[4]

Newman was one of a number of Anglican clergy who were received into the Roman Catholic Church during the 1840s who were either members of, or were influenced by, Tractarianism.

Other people influenced by Tractarianism who became Roman Catholics included:

Others associated with Tractarianism