Oxalic acid is an organic compound with the formula C2H2O4. It is a white crystalline solid that forms a colorless solution in water. Its condensed formula is HOOCCOOH, reflecting its classification as the simplest dicarboxylic acid.

Its acid strength is much greater than that of acetic acid. Oxalic acid is a reducing agent[7] and its conjugate base, known as oxalate (C
2O2−
4), is a chelating agent for metal cations. Typically, oxalic acid occurs as the dihydrate with the formula C2H2O4·2H2O.

It occurs naturally in many foods, but excessive ingestion of oxalic acid or prolonged skin contact can be dangerous.

Its name comes from the fact that early investigators isolated oxalic acid from flowering plants of the genus Oxalis, commonly known as wood-sorrels.

The preparation of salts of oxalic acid from plants had been known, at the latest, since 1745, when the Dutch botanist and physician Herman Boerhaave isolated a salt from sorrel.[8] By 1773, François Pierre Savary of Fribourg, Switzerland had isolated oxalic acid from its salt in sorrel.[9]

In 1824, the German chemist Friedrich Wöhler obtained oxalic acid by reacting cyanogen with ammonia in aqueous solution.[12] This experiment may represent the first synthesis of a natural product.[13]

Oxalic acid is mainly manufactured by the oxidation of carbohydrates or glucose using nitric acid or air in the presence of vanadium pentoxide. A variety of precursors can be used including glycolic acid and ethylene glycol.[14] A newer method entails oxidative carbonylation of alcohols to give the diesters of oxalic acid:

These diesters are subsequently hydrolyzed to oxalic acid. Approximately 120,000 tonnes are produced annually.[13]

Historically oxalic acid was obtained exclusively by using caustics, such as sodium or potassium hydroxide, on sawdust.[15] Pyrolysis of sodium formate (ultimately prepared from carbon monoxide), leads to the formation of sodium oxalate, easily converted to oxalic acid.

Although it can be readily purchased, oxalic acid can be prepared in the laboratory by oxidizing sucrose using nitric acid in the presence of a small amount of vanadium pentoxide as a catalyst.[16]

The hydrated solid can be dehydrated with heat or by azeotropic distillation.[17]

Anhydrous oxalic acid exists as two polymorphs; in one the hydrogen-bonding results in a chain-like structure whereas the hydrogen bonding pattern in the other form defines a sheet-like structure.[19] Because the anhydrous material is both acidic and hydrophilic (water seeking), it is used in esterifications.

Oxalic acid is a relatively strong acid, despite being a carboxylic acid:

Oxalate, the conjugate base of oxalic acid, is an excellent ligand for metal ions, e.g. the drug oxaliplatin.

Oxalic acid and oxalates can be oxidized by permanganate in an autocatalytic reaction.[21]

At least two pathways exist for the enzyme-mediated formation of oxalate. In one pathway, oxaloacetate, a component of the Krebs citric acid cycle, is hydrolyzed to oxalate and acetic acid by the enzyme oxaloacetase:[26]

It also arises from the dehydrogenation of glycolic acid, which is produced by the metabolism of ethylene glycol.

Occurrence in foods and plants

Calcium oxalate is the most common component of kidney stones. Early investigators isolated oxalic acid from wood-sorrel (Oxalis). Members of the spinach family and the brassicas (cabbage, broccoli, brussels sprouts) are high in oxalates, as are sorrel and umbellifers like parsley.[27] Rhubarb leaves contain about 0.5% oxalic acid, and jack-in-the-pulpit (Arisaema triphyllum) contains calcium oxalate crystals. Similarly, the Virginia creeper, a common decorative vine, produces oxalic acid in its berries as well as oxalate crystals in the sap, in the form of raphides. Bacteria produce oxalates from oxidation of carbohydrates.[13]

Plants of the genus Fenestraria produce optical fibers made from crystalline oxalic acid to transmit light to subterranean photosynthetic sites.[28]

The formation of naturally occurring calcium oxalate patinas on certain limestone and marble statues and monuments has been proposed to be caused by the chemical reaction of the carbonate stone with oxalic acid secreted by lichen or other microorganisms.[30][31]

Many soil fungus species secrete oxalic acid, resulting in greater solubility of metal cations, increased availability of certain soil nutrients, and can lead to the formation of calcium oxalate crystals.[32][33]

The conjugate base of oxalic acid is the hydrogenoxalate anion, and its conjugate base (oxalate) is a competitive inhibitor of the lactate dehydrogenase (LDH) enzyme.[35] LDH catalyses the conversion of pyruvate to lactic acid (end product of the fermentation (anaerobic) process) oxidising the coenzyme NADH to NAD+ and H+ concurrently. Restoring NAD+ levels is essential to the continuation of anaerobic energy metabolism through glycolysis. As cancer cells preferentially use anaerobic metabolism (see Warburg effect) inhibition of LDH has been shown to inhibit tumor formation and growth,[36] thus is an interesting potential course of cancer treatment.

About 25% of produced oxalic acid will be used as a mordant in dyeing processes. It is used in bleaches, especially for pulpwood. It is also used in baking powder[13] and as a third reagent in silica analysis instruments.

Oxalic acid's main applications include cleaning or bleaching, especially for the removal of rust (iron complexing agent). Its utility in rust removal agents is due to its forming a stable, water-soluble salt with ferric iron, ferrioxalate ion.

Oxalic acid is an important reagent in lanthanide chemistry. Hydrated lanthanide oxalates form readily in very strongly acidic solutions in a densely crystalline, easily filtered form, largely free of contamination by nonlanthanide elements. Thermal decomposition of these oxalate gives the oxides, which is the most commonly marketed form of these elements. 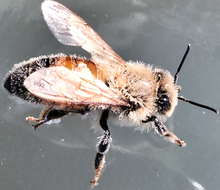 Oxalic acid is used by some beekeepers as a miticide against the parasitic varroa mite.[37]

Oxalic acid is sometimes used in the aluminum anodizing process, with or without sulfuric acid. Compared to sulfuric acid anodizing, the coatings obtained are thinner and exhibit lower surface roughness.

Oxalic acid is an ingredient in some tooth whitening products.

Oxalic acid in concentrated form can have harmful effects through contact and if ingested. It is not identified as mutagenic or carcinogenic, although there is a study suggesting it might cause breast cancer;[44] there is a possible risk of congenital malformation in the fetus; may be harmful if inhaled, and is extremely destructive to tissue of mucous membranes and upper respiratory tract; harmful if swallowed; harmful to and destructive of tissue and causes burns if absorbed through the skin or is in contact with the eyes. Symptoms and effects include a burning sensation, cough, wheezing, laryngitis, shortness of breath, spasm, inflammation and edema of the larynx, inflammation and edema of the bronchi, pneumonitis, pulmonary edema.[45]

In humans, ingested oxalic acid has an oral LDLo (lowest published lethal dose) of 600 mg/kg.[46] It has been reported that the lethal oral dose is 15 to 30 grams.[47]

Oxalate may enter cells where it is known to cause mitochondrial dysfunction.[48]

^a Unless otherwise cited, all measurements are based on raw vegetable weights with original moisture content.