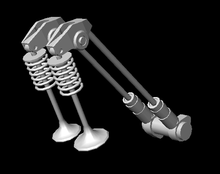 The camshaft in an OHV engine is located in the engine block. The motion of the camshaft is transferred using pushrods and rocker arms to operate the valves at the top of the engine.

Technically, an overhead camshaft (OHC) engine also has overhead valves; however, to avoid confusion, OHC engines are not usually described as overhead valve engines. Some early "intake over exhaust" engines used a hybrid design combining elements of both side-valves and overhead valves.[1]

The first internal combustion engines were based on steam engines and therefore used slide valves.[2] This was the case for the first Otto engine, which was first successfully run in 1876. As internal combustion engines began to develop separately to steam engines, poppet valves became increasingly common, with most engines until the 1950s using a side-valve (flathead) design.[3]

Beginning with the 1885 Daimler Reitwagen, several cars and motorcycles used inlet valve(s) located in the cylinder head, however these valves were vacuum-actuated ("atmospheric") rather than driven by a camshaft as per typical OHV engines. The exhaust valve(s) were driven by a camshaft, but were located in the engine block as per side-valve engines.

The 1894 Diesel prototype engine used overhead poppet valves actuated by a camshaft, pushrods and rocker arms,[4][5] therefore becoming one of the first OHV engines. In 1896, U.S. patent 563,140 was taken out by William F. Davis for an OHV engine with liquid coolant used to cool the cylinder head.[6][7] but no working model was built.

In 1898, bicycle manufacturer Walter Lorenzo Marr in the United States built a prototype motorised tricycle powered by a single-cylinder OHV engine.[8] Marr was hired by Buick (then named Buick Auto-Vim and Power Company) from 1899–1902, where the overhead valve engine design was further refined.[9] This engine employed pushrod-actuated rocker arms, which in turn opened valves parallel to the pistons. Marr returned to Buick in 1904 (having built a small quantity of the Marr Auto-Car, with the first known engine to use an overhead camshaft design), the same year that Buick received a patent for an overhead valve engine design. In 1904, the world's first production OHV engine was released in the Buick Model B. The engine was a flat-twin design with two valves per cylinder. The engine was very successful for Buick, with the company selling 750 such cars in 1905.

Several other manufacturers began to produce OHV engines, such as the 1906–1912 Wright Brothers Vertical 4-Cylinder Engine.[10][11] However, side-valve engines remained commonplace until the late 1940s, when they began to be phased out for OHV engines.

The first overhead camshaft (OHC) engine dates back to 1902,[12] however use of this design was mostly limited to high performance cars for many decades. OHC engines slowly became more common from the 1950s to the 1990s, and by the start of the 21st century, the majority of automotive engines (except for some North American V8 engines) used an OHC design.

At the 1994 Indianapolis 500 motor race, Team Penske entered a car powered by the custom built Mercedes-Benz 500I OHV engine. Due to a loophole in the rules, the OHV engine was allowed to use a larger displacement and higher boost pressure, significantly increasing its power output compared to the OHC engines used by other teams. Team Penske qualified in pole position and won the race by a large margin.

In the early 21st century, several OHV V8 engines from General Motors and Chrysler used variable displacement to reduce fuel consumption and exhaust emissions. In 2008, the first production OHV engine to use variable valve timing was introduced in the Dodge Viper (fourth generation).[13] 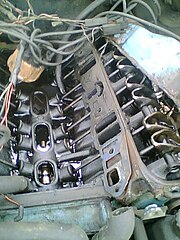 Compared with OHC engines, OHV engines have the following disadvantages: