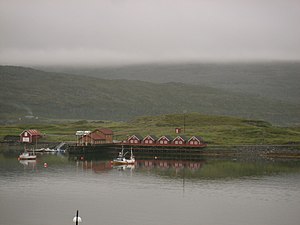 Overcast or overcast weather, as defined by the World Meteorological Organization, is the meteorological condition of clouds obscuring at least 95% of the sky.[1] However, the total cloud cover must not be entirely due to obscuring phenomena near the surface, such as fog.[2]

Overcast, written as "OVC" in the METAR observation, is reported when the cloud cover is observed to equal eight oktas (eighths).[1][3] An overcast sky may be explicitly identified as thin (mostly transparent), but otherwise is considered opaque, which always constitutes a ceiling in aviation meteorology.[2]

Sometimes clouds can be different colors such as black or white, but overcast usually refers to darker skies.[4] In some cases, it can be impossible to see distinct borders of clouds or the sky may be covered by a single type of cloud, such as stratus and the whole sky will be a dull white.

The same weather, when observed from above, might be referred to as (an) undercast.[5]