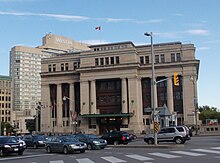 The Senate of Canada Building (French: édifice du Sénat du Canada) is a building located at 2 Rideau Street in downtown Ottawa, Ontario, Canada that serves as the temporary seat of the Senate of Canada. The building includes the temporary Senate chamber, as well as some Senate offices and committee rooms. The building served as Ottawa's central railway station until 1966, and from 1966 to 2018 it was operated by the federal government as the Government Conference Centre.

It is situated at the intersection of Wellington Street and the Rideau Canal, across the street from the Château Laurier hotel (which was constructed around the same time). It is 600 metres (2,000 ft) from Parliament Hill and Confederation Square.[2]

History of Railways in Ottawa

Before the turn of the twentieth century, several railway companies had run lines into the city and had begun to build railway stations. In chronological order:[3]

Broad Street, in the Lebreton Flats area, was the site of several stations including the first Union station (1881), which perished by fire in 1896 and again in 1900 and was rebuilt each time.[4] The last one closed in 1920. Broad Street was near the Prince of Wales Bridge, the link to Montreal via the north shore of the Ottawa River. Broad Street itself no longer exists, erased as part of the National Capital Commission's efforts at improving the capital area.

Ottawa became part of the Canadian Pacific Railway's transcontinental rail service on June 28, 1886, when the first Pacific Express arrived at Broad Street from Montreal via Lachute and Hull, Quebec,[5] on its way to Sudbury, Winnipeg, Calgary, and Port Moody, B.C. It used the existing Prince of Wales Bridge to cross the Ottawa River near the site of the present-day O-Train Bayview Station, west of Parliament Hill. This rail bridge had been built in 1880 by the Quebec, Montreal, Ottawa and Occidental Railway and was transferred to Canadian Pacific in 1882.

However, there was no centrally located station until 1895, through efforts of John Rudolphus Booth.[3] Booth was a Canadian lumber baron known for creating Canada's largest sawmill right in Ottawa, near Chaudière Falls. His mill's capacity exceeded the distribution infrastructure, and he looked to rail as a solution. (Eighteen years previous, he had established the Canada Atlantic Railway.) Booth had built a central depot in 1895 just south of Rideau Street, on the east side of the canal and reachable by way of a covered stairway from Sappers Bridge.[6] The station seemed to not be truly serving the needs of the railway companies, since it was built for the interests of the Canada Atlantic Railway.[3]

CPR's Royal Alexandra Interprovincial Bridge built in 1901 became the second railway bridge to cross the Ottawa River between Ottawa and Hull. It led to Booth's central depot. In 1905, Booth sold the Canadian Atlantic Railway to the Grand Trunk Railway.[7]

In 1910, the Grand Trunk was apportioned part of the Rideau Canal in order to build a new station and hotel.[3] The hotel would become the famous Chateau Laurier, and the station would become Ottawa's Union Station. 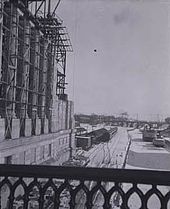 The building was opened by the Grand Trunk Railway in 1912 as Ottawa's central railway station, and the hotel was built across the street to serve travellers. Over the course of the following years, passenger services of other railways moved to this station, thereby clarifying and unifying passenger travel in the city.[8] When the last Canadian Pacific trains moved from the old Union Station on Broad Street to Grand Trunk Central station on January 4, 1920, the old station was closed and the Grand Trunk station became Ottawa Union Station.[9]

The June 1912 opening of the Union Station and the Chateau Laurier was not met with much fanfare, since Grand Trunk Railway general manager Charles Melville Hays had just perished in the Titanic disaster two months previously.[3]

The Doric Roman Revival multi pillar Union station[10] was originally designed by New York-based architect Bradford Lee Gilbert who was eventually dismissed due to concerns of mismanagement. The Montreal firm of Ross and MacFarlane took over the project, making many design changes to the station.[11] Ross and MacFarlane also took over the design of the Château Laurier and later built Toronto's Union Station.

Both Canadian National Railways (successor to the Grand Trunk) and Canadian Pacific Railway operated regularly scheduled passenger trains through the facility until it ceased operations on July 31, 1966.[10]

Several tracks which originated from the main railway infrastructure in Ottawa ran immediately adjacent to the Rideau Canal (right on its east banks) and led northward into the city. They approached Union Station through several sheds. From the sheds, emerged two tracks (on the east side of the Rideau Canal), and continued along, proceeding under the bridge where Wellington Street crosses the canal. They then ran immediately adjacent to the west side of Chateau Laurier, in a structure which was used for a time in a converted form, by the Canadian Museum of Contemporary Photography. The track continued, where there is now a paved road and ran to the Alexandra (Interprovincial) Bridge.

Once in Hull, there was the possibility to continue to other parts of Quebec, or to return to Ottawa by making a turn and returning over the Prince of Wales Bridge. Some of the pathways in present-day Gatineau are on locations where rails had once made this possible.

In 1966, the National Capital Commission decided to remove the tracks along the east side of the Canal as part of an urban renewal plan. They were replaced by a scenic drive, and a new Ottawa station was built just east of Ottawa's downtown area in the neighbourhood of Eastway Gardens. While the NCC had originally planned to tear down the structure, it was spared, becoming the centre of Canada's centenary celebrations in 1967. After sitting empty for many years, it was turned into the Government Conference Centre. A new entrance and canopy at the rear of the building was built to provide greater security for the Commonwealth Prime Ministers meeting held in 1973. The same year, artist Bruce Garner sculpted bronze doors for the new entrance, titled Reflections of Canada.[8] The tracks and sheds south of the station were demolished and now taken over by Colonel By Drive and the Rideau Centre. 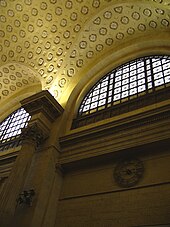 Interior view of Waiting Room, which was inspired by the Baths of Caracalla

It has since been home to many gatherings of civil servants and politicians. In 2001, the building hosted the G20 conference, a gathering of 20 finance ministers from around the world.

As well as hosting conferences, the building is also sometimes used as a gallery. A section of the Berlin wall was on display inside the main entrance from September 27, 1991, until January 29, 2011. Because the location of the display was not widely publicized, it was decided that the segment would be more prominent at its new location in the Canadian War Museum.[12]

The building is inspired by the Beaux-Arts architectural style. The main departures hall (now the main conference area) is based on the Great Hall of the Roman Baths of Caracalla at 3/4 scale. It is therefore similar to the now-destroyed departures hall of New York Penn Station.[8]

The cavernous structure has never been well suited to its role as a conference centre.[citation needed] In the mid-1990s a proposal was made to turn it into the new home for the Canadian Sports Hall of Fame, but these plans fell through. In his final year in office, Prime Minister Jean Chrétien announced that the building would become home to a new museum of Canadian political history, but incoming Prime Minister Paul Martin cancelled this project, and it has remained a conference centre.[13]

In 2007, the idea of reverting the building back to its original use sprang up as Ottawa considered various proposals for regional commuter rail systems. It is seen as being feasible to do so (although it would require a long tunnel to reconnect to the existing railway tracks)[citation needed] ; however, the Government of Canada's Department of Public Works says the building is not for sale.[14][failed verification]

Restored plasterwork in the Main Hall

In July 2013, it was announced by Public Works Canada that the building would be used to temporarily accommodate the Senate chamber (in the main concourse of the old train station) along with 21 Senate offices and three committee rooms (in the old general waiting room)[15] while the Centre Block undergoes major rehabilitation work projected to take up to ten years. It was decided that the need to rehabilitate this historical building presented a perfect opportunity to find an interim home for the Senate.[16] The works which are already well under way, will include:

In February 2019, the Senate of Canada Building formally re-opened in its current role.[17]