Old Ottawa East or just Ottawa East (Vieil Ottawa Est in French) is a neighbourhood in Capital Ward in central Ottawa, Ontario, Canada. It is located south of Nicholas Street and between the Rideau Canal and the Rideau River. The southern border is Avenue Road.[1] To the south is the neighbourhood of Old Ottawa South to the northeast is Sandy Hill. Old Ottawa East includes the Lees Avenue area. The Flora Footbridge, which opened to pedestrians in 2019, connects the community to The Glebe.

This small neighbourhood was originally the suburban community of Archville that was incorporated as the village of Ottawa East in 1888. In 1907 it was amalgamated with the growing community of Ottawa. Running through the centre of the neighbourhood is Main Street, which was the central road of Archville, but which is not particularly central to modern Ottawa. The neighbourhood is home to Saint Paul University, Lady Evelyn Alternative School, St. Nicholas Adult High School and Immaculata High School.

The southern part of the neighbourhood is sometimes referred to as Rideau Gardens.

As an independent village, Ottawa East elected a reeve (similar to a mayor) to head a village council from 1888 to 1907. The reeves of the village were as follows: 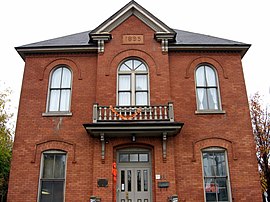