It serves as a secondary hub for domestic and overseas territories flights of Air France and as the homebase for Transavia France. Flights operate to destinations in Europe, the Middle East, Africa, the Caribbean, North America, East Asia and Southeast Asia.

Prior to the opening of Charles de Gaulle Airport in March 1974, Orly was the main airport of Paris. Even with the shift of most international traffic to Charles de Gaulle Airport, Orly remains the busiest French airport for domestic traffic and the second busiest French airport overall in passenger traffic, with 33,120,685 passengers in 2018.[3] The airport is operated by Groupe ADP under the brand Paris Aéroport. Since February 2018, the CEO of the airport has been Régis Lacote.

Management of the airport, however, is solely under the authority of Aéroports de Paris, which also manages Charles de Gaulle Airport, Le Bourget Airport, and several smaller airports in the suburbs of Paris.

Originally known as Villeneuve-Orly Airport, the facility was opened in the southern suburbs of Paris in 1932 as a secondary airport to Le Bourget. Before this two huge airship hangars had been built there by the engineer Eugène Freyssinet from 1923 on.[citation needed]

As a result of the Battle of France in 1940, Orly Airport was used by the occupying German Luftwaffe as a combat airfield, stationing various fighter and bomber units at the airport throughout the occupation.[10] Consequently, Orly was repeatedly attacked by the Royal Air Force and United States Army Air Forces (USAAF), destroying much of its infrastructure, and leaving its runways with numerous bomb craters to limit its usefulness to the Germans.[citation needed]

After the Battle of Normandy and the retreat of German forces from the Paris area in August 1944, Orly was partially repaired by USAAF combat engineers and was used by Ninth Air Force as tactical airfield A-47. The 50th Fighter Group flew P-47 Thunderbolt fighter-bomber aircraft from the airport until September, then liaison squadrons used the airfield until October 1945.[11]

The American United States Army Air Forces 1408th Army Air Force Base Unit was the primary operator at Orly Field until March 1947 when control was returned to the French Government. (The United States Air Force leased a small portion of the Airport to support Supreme Headquarters Allied Powers Europe (SHAPE) at Rocquencourt). The Americans left in 1967 as a result of France's withdrawal from NATO's integrated military command, and all non-French NATO forces were asked to leave France.[12]

In May 1958, Pan Am Douglas DC-7Cs flew to Los Angeles in 21 hr 56 min; TWA, Air France and Pan Am flew nonstop to New York in 14 hrs 10–15 min. Air France flew to Tokyo in 31 hr 5 min via Anchorage or 44 hr 45 min on a seven-stop Lockheed Constellation (1049G model) via India. Air France's ten flights a day to London were almost all Vickers Viscounts; the only other London flight was Alitalia's daily Douglas DC-6B (BEA was at Le Bourget).[citation needed]

A development project voted in 2012 planned to merge the airport's south and west terminals with the construction of an 80,000-square-metre (860,000 sq ft) building to create one great terminal.[13] On 14 April 2016, the Groupe ADP rolled out the Connect 2020 corporate strategy and the commercial brand Paris Aéroport was applied to all Parisian airports, including the Orly airport.[14]

As part of the COVID-19 pandemic and its impact on aviation, the airport was closed to all commercial traffic from April 1st, 2020, to June 25th, 2020. Flights were redirected to the Charles de Gaulle Airport. During this time, the airport was still used for State flights, emergency diversions, and medical evacuations.

Known as the West Terminal until March 2019, these two Terminals consist of two floors and a gate area of four "fingers" rather than a brick-style layout. The ground level 0 features the arrivals facilities including 8 baggage reclaim belts as well as several service facilities and shops. The departures area is located on level 1 with more stores and restaurants located here. This central departures area is connected to three gate areas split between Orly 1 (A and B gates) and Orly 2 (C gates) .[15] 23 stands at this terminal are equipped with jet-bridges, with several of them also able to handle wide-body aircraft.[16]

Inaugurated in April 2019, Terminal 3 is a junction building between Terminals 1, 2 and 4. The terminal allows customers to travel between all areas of the airport under one roof. It includes around 5,000 sqm of Duty Free shopping along with several restaurants and lounges. It houses gates D and E, with direct access to Orly 4 departure gates.[17]

Formerly known as the South Terminal this innovative 1961 steel-and-glass terminal building consists of six floors. While the smaller basement level −1 as well as the upper levels 2, 3 and 4 contain only some service facilities, restaurants and office space, level 0 features the arrivals facilities as well as several shops and service counters. The airside area and departure gates are located on the upper level 1. The waiting area, which features several shops as well, houses gates E and F.[15] 15 of the terminal's departure gates are equipped with jet-bridges, some of them are able to handle wide-body aircraft.[16] 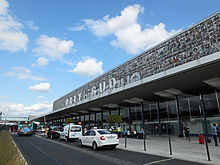 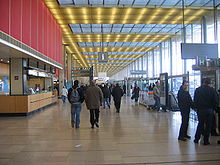 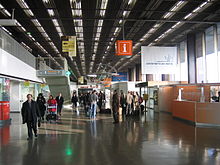 Orly Airport is connected to the A106 autoroute (spur route of the A6 autoroute).