Orleans (/ɔːrˈliːnz/; French: [ɔʁleɑ̃]; officially Orléans[1][note 1]) is a suburb of Ottawa, Ontario, Canada. It is located in the east end of the city along the Ottawa River, about 16 km (10 mi) from Downtown Ottawa. The Canada 2016 Census determined that Orléans' population was 116,688. Prior to being amalgamated into Ottawa in 2001, the community of Orléans was spread over two municipal jurisdictions, the eastern portion being in the pre-amalgamation City of Cumberland, the western portion in the City of Gloucester. According to the 2016 census, 69,178 people lived in the Cumberland portion of Orleans, while 47,510 people lived in the Gloucester portion. Today, Orléans spans the municipal wards of Orléans, Innes, and Cumberland. Orléans contains a significant francophone population. 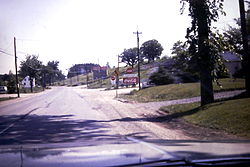 St-Joseph Blvd. circa 1971. The Duford Hill to Queenswood Heights is in the background (behind the Coca-Cola sign). Today, Place d'Orléans would be on the left and the Dental Docs Office to the right.

It was in the 1830s that the earliest pioneers arrived in the Orléans area. Amongst the first Francophones were the Dupuis, Besserer, Major, Duford and Vézina families. A few English-speaking families also made Orléans their home from the very beginning, such as the Kennys and the McNeelys. In 1880, the parish was made up of 43 Anglophone families and 131 Francophone families.

In 1858, the first subdivision plans (Lots 1 and 2) were registered in the County of Carleton, for Gloucester Township, thereby creating the Village of Saint-Joseph d'Orléans. In 1859, François Dupuis also registered his plan (Lot 3) including St. John (St-Jean), Dupuis (Dessere), and Scott Streets (St-Charles).

Orleans was named by Msgr. Ebrard in the late 1850s for the city of the same name in France. According to the Canadian Permanent Committee on Geographical Names files he applied for establishment of a post office "plus tard en 1859". It was granted in 1860.[2]

In 1860, Father Alphonse-Marius Chaîne was appointed resident priest of the new Saint-Joseph d’Orléans parish, founded in October of the same year.

In 1885, the first church opened its doors. In 1922, a second church - the current one - replaced the first which had been destroyed by fire. The parish priest was Mgr. Hilaire Chartrand.

In the same year (1922) Orléans became a semi-autonomous municipality, known as a police village, and more decisions were made locally. The police village was governed by a council consisting of three volunteers elected to preserve peace, health, and public safety. At the time, the village was part of Gloucester Township, which in turn, was part of Carleton County. However, some parishioners lived in Cumberland Township, east of Champlain Street, the dividing line between the townships.

By the 1950s, St-Joseph Boulevard became a major artery, with storefronts multiplying everywhere and new restaurants opening up the length of the through fare. Social life took on a decidedly community flavour, with clubs and community associations being formed. Commercial life improved considerably in Orléans in 1955 with the establishment of the first Chamber of Commerce in Orléans, which campaigned on behalf of various causes, such as pressing for a decent water and sewer system in the 1960s. The quiet, rural community that was once Orléans lived its last moments in 1958, when developers hit the town, and from then on, things would never be the same. Orléans has known dramatic residential growth since then, which has led to profound social and linguistic changes in the make-up of the population.

The first major real estate development was Queenswood Heights with construction beginning in 1958. In 1970, the Grey Nuns of Charity Congregation sold 500 acres of land to the Costain and Minto real estate companies, which launched major developments in the Convent Glen, Orléans Wood, Chatelaine Village areas, etc.

On Jan. 1 1974, the village of Saint-Joseph d’Orléans was incorporated into the Regional Municipality of Ottawa-Carleton. It was in the 1970s that the first high schools opened their doors, and after-class hours had Orléans youth start setting up their own clubs.

The housing and population boom years for Orléans came in the decade from 1981 to 1991. The population of Orléans tripled and grew from 24,000 to 70,000 people. Orléans recorded the second-highest population growth rate in the entire country in the late 1980s.

In 2001, Orléans was amalgamated into the City of Ottawa, becoming Urban sub-area No. 16 (now No. 15). The country-wide housing boom starting from 2000 has also seen an extremely large amount of housing and residential areas being developed in the eastern Orléans area west of Trim Road and south of Innes Road, such as the new communities Avalon, Notting Gate (including Notting Hill). The population and business growth in the area prompted the re-development of Innes Road from a two-lane to a four-lane road in 2005. With the Innes Road expansion, newer business areas along Innes Road between Trim and Pagé Roads, consist of many large retail outlets, restaurants, gyms, a movie theatre, etc. Millennium Sports Park is a 34 hectare sports and recreational complex, consisting of 15 Soccer and Football fields located at 100 Millennium Blvd in Orleans. The closest major intersection to the Sports Park is Innes Road @ Trim Road. The site is currently home to a number of youth sporting clubs in the Eastern half of the Greater Ottawa Area. Currently, the largest tenants at the facility are Ottawa TFC soccer club (formerly known as the Cumberland United Soccer Club) and the Cumberland Panthers football club.

Petrie Island is situated along the Ottawa River in the north-east of Orléans. The Petrie Islands were formed by sand deposited at the close of  the last ice age, about 12,000 years ago. The 2 km by 500 m area, from the foot of Champlain St. to Trim Rd in Orleans, has a total shoreline length, including all channels and bays, of about 12 km. Much of the area has been publicly owned since 1983, purchased to preserve the natural habitat of the western portion of the islands. Sand dredging at the eastern end was phased out in 2003, and the ten-hectare sand fill and natural beach is now in use for public recreation. Petrie Island is home to turtles in some of its sheltered lagoons and has a nature centre for learning more about the local environment. There is a marina with canoe and kayak rentals. Petrie Island is host to annual Canada Day celebrations for the Orléans community.

There are also several nature trails and paths throughout the area including the Bilberry Creek Trail and the Princess Louise Trail (incl. a waterfall) through which Taylor Creek runs. In 1984 the Township formed a committee to develop a policy for uses of Conservation lands and approved the policy in March 1985. In 1988 a Township wide Nature trails sub-committee was formed under the Cumberland Township Recreation committee. This Committee, composed of volunteer Township residents advises and assists the Township in the development, maintenance and protection of the natural areas within Cumberland.

At present there are:

In 2009, the Shenkman Arts Centre opened just east of Place d'Orléans. It is a multidisciplinary arts centre that houses two theatres, seven galleries and 17 studios. The Centre houses activities within specialized spaces for hands-on instruction, creation and presentation of the visual, performing, literary and media arts and unique spaces for receptions and special events. Operated by the City of Ottawa, this diversity of programs and activities is attributed to a unique collaboration with the Centre’s Resident Arts Partners: AOE Arts Council, Gloucester Pottery School, MIFO (Mouvement d’implication francophone d’Orléans), Ottawa School of Art–Orléans Campus, and OYP Theatre School. The Centre is also home to Resident Company Tara Luz Danse and ARTicipate, a one-of-a-kind endowment fund that supports innovative programming at the Centre.

A memorial diorama by Bruce Garner was erected August 13, 2000 in the Memorial Park near Royal Canadian Legion, Branch 632 to remember those who have served Canada in wars and as peace keepers.[3] 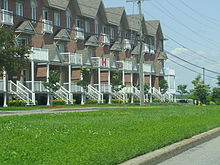 Bilberry Creek: Located east of Jeanne d'Arc Boulevard, north of Highway 174 and east towards the eastern end of the development.

Chateau Neuf: Is bounded by St-Joseph Boulevard on the north, Innes Road on the south. The eastern border includes Jeanne d'Arc-Sunview-Des Grives-Barsona-Place Belleterre-Duford Drive, and Orléans Boulevard borders the west.

Chatelaine Village: Located north of Highway 174 toward the Ottawa River and East of Willow Ave.

Convent Glen: Located north of Highway 174 toward the Ottawa River and west of Jeanne d'Arc Boulevard.

Mer Bleue (future): This proposed neighbourhood would be located south of Innes Road between Mer Bleue and Tenth Line Road and south towards the Urban limit.

Orleans Wood: Located north of Highway 174 toward the Ottawa River, east of Jeanne d'Arc Boulevard and west of Champlain Street.

The main highway linking Orléans to central Ottawa to the west is officially known as Ottawa Regional Road 174 and forms part of the Queensway.