The Orinoco River (Spanish pronunciation: [oɾiˈnoko]) is one of the longest rivers in South America at 2,250 kilometres (1,400 mi). Its drainage basin, sometimes known as the Orinoquia,[citation needed] covers 880,000 km2 (340,000 sq mi), with 76.3 percent of it in Venezuela and the remainder in Colombia. It is the fourth largest river in the world by discharge volume of water. The Orinoco River and its tributaries are the major transportation system for eastern and interior Venezuela and the llanos of Colombia. The environment in the Orinoco's basin is extremely diverse; it hosts a wide variety of flora and fauna. 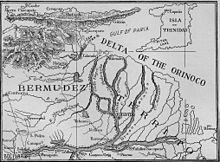 The Orinoco, and tributaries in the eastern llanos such as the Apure and Meta, were explored in the 16th century by German expeditions under Ambrosius Ehinger and his successors. In 1531 Diego de Ordaz, starting at the principal outlet in the delta, the Boca de Navios, sailed up the river to the Meta. Antonio de Berrio sailed down the Casanare to the Meta, and then down the Orinoco River and back to Coro. In 1595, after capturing de Berrio to obtain information while conducting an expedition to find the fabled city of El Dorado, the Englishman Sir Walter Raleigh sailed down the river, reaching the savannah country.

Alexander von Humboldt explored the basin in 1800, reporting on the pink river dolphins. He published extensively on the river's flora and fauna.[4]

The sources of the Orinoco River located at Cerro Carlos Delgado Chalbaud (2º19’05” N, 63º21’42” W) were discovered in 1951 by the French-Venezuelan expedition that went back and explored the Upper Orinoco course to the Sierra Parima near the border with Brasil, headed by Venezuelan army officer Frank Risquez Iribarren. [5][6]

The first bridge across the Orinoco River was the Angostura Bridge at Ciudad Bolívar, Venezuela, completed in 1967.[7]

On 1968, an expedition was set off by National Geographic and Hovercraft from Manaus in Brazil to Port Of Spain (Trinidad). Aboard of a SR.N6 hoverwork the expedicionaries followed the Negro river upstream to where it is joined by the Casiquiare canal in the border between Colombia and Venezuela. After following the Casiquiare to the Orinoco River they hovered thru perilous Rapids of Maipures and Atures. The Orinoco was then traversed down to its mouths in gulf of Paria and then to Port of Spain. The primary purpose of the expedition was filming for the BBC series "The World About Us" the episode "The Last Great Journey on Earth from Amazon to Orinoco by Hovercraft", aired in 1970, and demonstrate the abilities of a hovercraft, thereby promoting sales of this British invention.

In 2006 a second bridge was completed near Ciudad Guayana, Venezuela, known as the Orinoquia Bridge.[citation needed]

The course of the Orinoco forms a wide ellipsoidal arc, surrounding the Guiana Shield; it is divided in four stretches of unequal length that very roughly correspond to the longitudinal zonation of a typical large river: 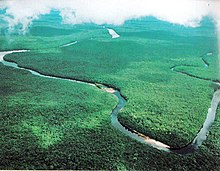 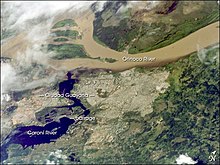 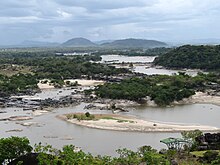 Rapids of the Orinoco River, near Puerto Ayacucho airport, Venezuela 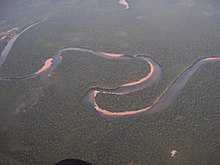 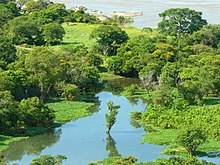 At its mouth, the Orinoco River forms a wide delta that branches off into hundreds of rivers and waterways that flow through 41,000 km2 (16,000 sq mi) of swampy forests. In the rainy season, the Orinoco River can swell to a breadth of 22 kilometres (14 mi) and a depth of 100 metres (330 ft).

Most of the important Venezuelan rivers are tributaries of the Orinoco River, the largest being the Caroní, which joins it at Puerto Ordaz, close to the Llovizna Falls. A peculiarity of the Orinoco river system is the Casiquiare canal, which starts as an arm of the Orinoco, and finds its way to the Rio Negro, a tributary of the Amazon, thus forming a 'natural canal' between Orinoco and Amazon.

Major rivers in the Orinoco Basin

The boto and the giant otter inhabit the Orinoco River system.[13] The Orinoco crocodile is one of the rarest reptiles in the world. Its range in the wild is restricted to the middle and lower Orinoco River Basin.[14]

More than 1000 fish species have been recorded in the river basin and about 15% are endemic.[15] Among the fish in the river are species found in brackish or salt water in the Orinoco estuary, but also many restricted to fresh water. By far the largest orders are Characiformes and Siluriformes, which together account for more than 80% of the fresh water species.[16] Some of the more famous are the black spot piranha and the cardinal tetra. The latter species, which is important in the aquarium industry, is also found in the Rio Negro, revealing the connection between this river and the Orinoco through the Casiquiare canal.[17] Because the Casiquiare includes both blackwater and clear- to whitewater sections, only relatively adaptable species are able to pass through it between the two river systems.[18]

The river is navigable for most of its length, and dredging enables ocean ships to go as far as Ciudad Bolívar, at the confluence of the Caroní River, 435 kilometres (270 mi) upstream. River steamers carry cargo as far as Puerto Ayacucho and the Atures Rapids.

In 1926, a Venezuelan mining inspector found one of the richest iron ore deposits near the Orinoco delta, south of the city of San Felix on a mountain named El Florero. Full-scale mining of the ore deposits began after World War II, by a conglomerate of Venezuelan firms and US steel companies. At the start in the early 1950s, about 10,000 tons of ore-bearing soil was mined per day.[19]

The Orinoco River deposits also contain extensive tar sands in the Orinoco oil belt, which may be a source of future oil production.[20]

Union of the Orinoco with the Caroní River

Encompassing the states of Anzoategui-Guarico and Monagas states, the Interior Range forms the northern boundary and the Guayana Shield the southern boundary.[21]:155 Maturin forms the eastern subbasin and Guarico forms the western subbasin.[21]:156 The El Furrial oil field was discovered in 1978, producing from late Oligocene shallow marine sandstones in an overthrusted foreland basin.[21]:155

Since 1973, the Civil Association Nuestros Rios son Navegables organize the Internacional Rally Nuestros Rios son Navegables, a motonautical round trip of over 1,200 kilometers through the Orinoco, Meta and Apure Rivers. Starting out from Ciudad Bolívar or San Fernando de Apure, is the longest fluvial rally in the world with the participation of worldwide competitors, more than 30 support boats, logistics teams, thousands of tourists and fans travel. The boats had an average speed of 120 miles per hour.

Since 1988, the local government of Ciudad Guayana has conducted a swim race in the rivers Orinoco and Caroní, with up to 1,000 competitors. Since 1991, the Paso a Nado Internacional de los Rios Orinoco–Caroní has been celebrated every year, on a Sunday close to 19 April. Worldwide, this swim-meet has grown in importance, and it has a large number of competitors.[22] The 26th meet was held in 2016.[23]