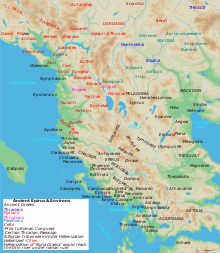 The city, said to have been founded by Euboeans[4][3] (perhaps as an Eretrian emporium[5]), was originally on an island, but already in ancient times it became connected to the mainland; it covered an area of 5 hectares (12 acres), but archaeological remains are scarce.[6] It was well situated for communication with Kerkyra,[7] and was only 65 kilometers (40 mi) across the sea from Otranto, making it a convenient stopping point on the journey between Greece and Italy.[8] Ancient sources (for instance, Herodotus) describe it as a limen, or harbor, but eventually it achieved the status of a polis, and from around 230 to 168 BC it issued its own coins with the legend ΩΡΙΚΙΩΝ ('of the Oricians').[9]

It had military importance under Roman rule, serving as a base during Rome's wars with the Illyrians and with Macedonia (which occupied it for a time); it was the first city taken by Julius Caesar during his invasion of Epirus, and he provides a vivid description of its surrender in Book 3 of his De Bello Civili:[10]

But as soon as Caesar had landed his troops, he set off the same day for Oricum: when he arrived there, Lucius Torquatus, who was governor of the town by Pompey's appointment, and had a garrison of Parthinians in it, endeavored to shut the gates and defend the town, and ordered the Greeks to man the walls, and to take arms. But as they refused to fight against the power of the Roman people, and as the citizens made a spontaneous attempt to admit Caesar, despairing of any assistance, he threw open the gates, and surrendered himself and the town to Caesar, and was preserved safe from injury by him. (III:12)

After this, Oricum "became more of a civilian settlement, and the few remains which can be seen today date from the 1st century BC or later.

In the 11th–12th centuries, Oricum, now known as Jericho (Greek: Ἱεριχὼ), formed a Byzantine province along with Kanina and Aulon.[11] As the Provincia Jericho et Caninon, it appears in the imperial chrysobull granted to Venice in 1198 by Alexios III Angelos.[11]

The Ottomans renamed Oricum Pashaliman, 'the Pasha's harbour', and the lagoon still bears this name, as does the nearby Albanian navy base."[12]

A previous misconception of the city is that it has an amphitheater. It is actually a monumental fountain or a public place that was also used as a water tank. There is also no drinkable water spring around, so the city had to collect rain water in order to survive.[15]

The city was almost entirely carved in stone, which lead to the base of the tank having a diameter of 10 meters (33 ft) Below, there is also an as yet unexcavated temple, and at a certain distance lies an altar that is dedicated to Dionysus.[16] A large portion of the city found is still underwater, as a helicopter ride can show the outlines of houses underwater, indicating that the coast around the port of Oricum had slowly submerged into the sea.

Traces of walls have been found around the city, evidence shows that it was repaired during Byzantine times.

Near the city can be found the Marmiroi Church. This is a church of dating back to the reign of the Byzantine emperor Theodore I. It has a small 6 by 9 meters (20 by 30 ft) main hall and a dome approximately 3 meters (9.8 ft) in diameter that is supported by four Roman arches. The inner walls feature fragments of typical Byzantine murals.[2]