An organ is a group of tissues with similar functions. Plant life and animal life rely on many organs that coexist in organ systems.[1]

A given organ's tissues can be broadly categorized as parenchyma, the tissue peculiar to (or at least archetypal of) the organ and that does the organ's specialized job, and stroma, the tissues with supportive, structural, connective, or ancillary functions. For example, in a gland, the tissue that makes the hormones is the parenchyma, whereas the stroma includes the nerves that innervate the parenchyma, the blood vessels that oxygenate and nourish it and carry away its metabolic wastes, and the connective tissues that provide a suitable place for it to be situated and anchored. The main tissues that make up an organ tend to have common embryologic origins, such as arising from the same germ layer. Functionally related organs often cooperate to form whole organ systems. Organs exist in most multicellular organisms. In single-celled organisms such as bacteria, the functional analogue of an organ is known as an organelle. In plants, there are three main organs.[2] A hollow organ is an internal organ that forms a hollow tube, or pouch such as the stomach, intestine, or bladder.

In the study of anatomy, the term viscus refers to an internal organ. Viscera is the plural form.[3][4]

The number of organs in any organism depends on which precise definition of the term one uses. By one widely used definition, 79 organs have been identified in the human body.[5]

In biology, tissue is a cellular organizational level between cells and complete organs. A tissue is an ensemble of similar cells and their extracellular matrix from the same origin that together carry out a specific function. Organs are then formed by the functional grouping together of multiple tissues.

The study of human and animal tissues is known as histology or, in connection with disease, histopathology. For plants, the discipline is called plant morphology. Classical tools for studying tissues include the paraffin block (agarose gel is often used with plants[6][7]) in which tissue is embedded and then sectioned, the histological stain, and the optical microscope. In the last couple of decades, developments in electron microscopy, immunofluorescence, and the use of frozen tissue sections have enhanced the detail that can be observed in tissues. With these tools, the classical appearances of tissues can be examined in health and disease, enabling considerable refinement of medical diagnosis and prognosis.

Two or more organs working together in the execution of a specific body function form an organ system, also called a biological system or body system. The functions of organ systems often share significant overlap. For instance, the nervous and endocrine system both operate via a shared organ, the hypothalamus. For this reason, the two systems are combined and studied as the neuroendocrine system. The same is true for the musculoskeletal system because of the relationship between the muscular and skeletal systems.

Common organ system designations in plants includes the differentiation of shoot and root. All parts of the plant above ground (in non-epiphytes), including the functionally distinct leaf and flower organs, may be classified together as the shoot organ system.[8] 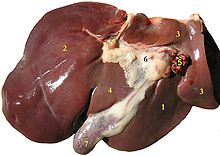 The liver and gallbladder of a sheep

Non-placozoan animals such as humans have a variety of organ systems. These specific systems are also widely studied in human anatomy. 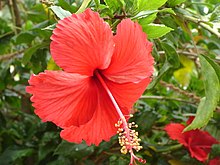 The flower is the angiosperm's reproductive organ. This Hibiscus flower is hermaphroditic, and it contains stamen and pistils. 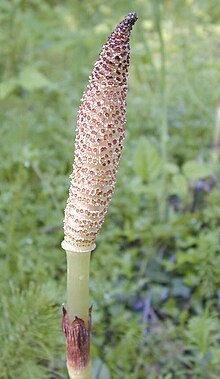 The study of plant organs is referred to as plant morphology, rather than anatomy – as in animal systems. Organs of plants can be divided into vegetative and reproductive. Vegetative plant organs include roots, stems, and leaves. The reproductive organs are variable. In flowering plants, they are represented by the flower, seed and fruit.[9] In conifers, the organ that bears the reproductive structures is called a cone. In other divisions (phyla) of plants, the reproductive organs are called strobili, in Lycopodiophyta, or simply gametophores in mosses.

Many societies have a system for organ donation, in which a living or deceased donor's organ is transplanted into a person with a failing organ. The transplantation of larger solid organs often requires immunosuppression to prevent organ rejection or graft-versus-host disease.

There is considerable interest throughout the world in creating laboratory-grown or artificial organs.[citation needed] 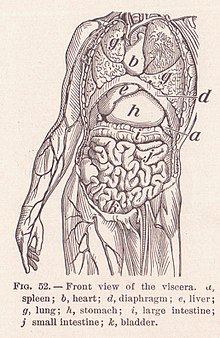 Plant organs are made from tissue composed of different types of tissue. The three tissue types are ground, vascular, and dermal.[11] When three or more organs are present, it is called an organ system.[12].

The adjective visceral, also splanchnic, is used for anything pertaining to the internal organs. Historically, viscera of animals were examined by Roman pagan priests like the haruspices or the augurs in order to divine the future by their shape, dimensions or other factors.[13] This practice remains an important ritual in some remote, tribal societies.

The term "visceral" is contrasted with the term "parietal", meaning "of or relating to the wall of a body part, organ or cavity"[14] The two terms are often used in describing a membrane or piece of connective tissue, referring to the opposing sides.[15]

Aristotle used the word frequently in his philosophy, both to describe the organs of plants or animals (e.g. the roots of a tree, the heart or liver of an animal), and to describe more abstract "parts" of an interconnected whole (e.g. his logical works, taken as a whole, are referred to as the "organon").[16]

Some alchemists (e.g. Paracelsus) adopted the Hermetic Qabalah assignment between the seven vital organs and the seven classical planets as follows:[17]

The variations in natural language definitions of what constitutes an organ, their degree of precision, and the variations in how they map to ontologies and taxonomies in information science (for example, to count how many organs exist in a typical human body) are topics explored by writer Carl Engelking of Discover magazine in 2017 as he analyzed the science journalism coverage of the evolving scientific understanding of the mesentery.[18] He explored a challenge now faced by anatomists: as human understanding of ontology generally (that is, how things are defined, and how the relationship of one thing to another is defined) meets applied ontology and ontology engineering, unification of varying views is in higher demand.[18] However, such unification always faces epistemologic frontiers, as humans can only declare computer ontologies with certainty and finality to the extent that their own cognitive taxonomy (that is, science's understanding of the universe) is certain and final. For example, the fact that the tissues of the mesentery are continuous was something that was simply not known for sure until it was demonstrated with microscopy.[19] Because humans cannot predict all future scientific discoveries, they cannot build a unified ontology that is totally certain and will never again change. However, one of the points made by an anatomist interviewed by Engelking is that, finality aside, much more could be done even now to represent existing human knowledge more clearly for computing purposes.

Beginning in the 20th century[20] transplants began to occur as scientists knew more about the anatomy of organs. These came later in time as procedures were often dangerous and difficult.[21] Both the source and method of obtaining the organ to transplant are major ethical issues to consider, and because organs as resources for transplant are always more limited than demand for them, various notions of justice, including distributive justice, are developed in the ethical analysis. This situation continues as long as transplantation relies upon organ donors rather than technological innovation, testing, and industrial manufacturing. 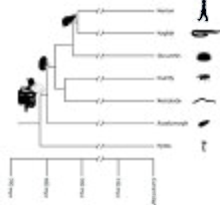 The organ level of organisation in animals can be first detected in flatworms and the more derived phyla. The less-advanced taxa (like Placozoa, Sponges and Radiata) do not show consolidation of their tissues into organs.

Given the ancient origin of most vertebrate organs, researchers have looked for model systems, where organs have evolved more recently, and ideally have evolved multiple times independently. An outstanding model for this kind of research is the placenta, which has evolved more than 100 times independently in vertebrates, has evolved relatively recently in some lineages, and exists in intermediate forms in extant taxa.[22] Studies on the evolution of the placenta have identified a variety of genetic and physiological processes that contribute to the origin and evolution of organs, these include the re-purposing of existing animal tissues, the acquisition of new functional properties by these tissues, and novel interactions of distinct tissue types.[22]