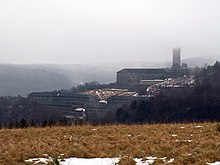 View to the Ordensburg from the former town of Wollseifen

Ordensburg Vogelsang is a former Nazi estate placed at the former military training area in Eifel National Park in North Rhine-Westphalia. The landmarked and completely preserved estate was used by the National Socialists between 1936 and 1939 as an educational centre for future leaders. Since 1 January 2006 the area has been open to visitors. It is one of the largest architectural relics of National Socialism. The gross area of the landmarked buildings is 50,000 m2.

The Watertower of the Ordensburg (48 m height)

Planning and construction since 1933

In a 1933 speech in Bernau near Berlin, Adolf Hitler demanded that new schools be built for the children of the leaders of his national socialist German labour party (NSDAP). The task was given to Robert Ley, the "Reichsorganisationsleiter" (literally: Reich Organisational Leader) of the NSDAP, who undertook the construction and operation of four educational camps (NS-Ordensburgen):

A fourth one was planned at (the historic) Ordensburg Marienburg, in West Prussia.

The construction of Ordensburg Vogelsang, most of which lies within the district of the town of Schleiden, was financed by expropriating trade unions and employers' associations. The contract for planning the Krössinsee and Vogelsang projects went to the Cologne architect Clemens Klotz.

The three buildings at Eifel have been known as "NS-Ordensburg" since 1935. The first phase of the project was the construction of the Castle of Vogelsang, which with up to 1,500 workers took only two years. Several much bigger buildings were also planned, such as a huge library to be called the "House of Knowledge" (Haus des Wissens) measuring 100 metres by 300 metres, a "Kraft durch Freude" hotel with 2000 beds, and the biggest sports facilities in Europe. Construction at the site halted on the outbreak of war.

Overview of the buildings

After a visit by Adolf Hitler in 1937, Doric pillars without any static function were added to the entrance gate. According to reports, the initiative for that came from Hitler himself.

Inscription: You are the torch bearers of the nation; You carry on the light of the spirit in the fight for (Adolf Hitler (unreadable))

Educational Castle of the NSDAP since 1936

On 24 April 1936, the three Ordensburgen were formally handed over to Adolf Hitler, and the first 500 Orden Junkers (cadets) moved into Vogelsang a little later, arriving from all over Germany. Most were in their mid twenties, and entrance requirements included a period of probationary party work, perfect physical health, proof of descent, and proof of work and military service.

Emphases were national socialist race science, geopolitics and intensive sportive education (especially equitation). Another emphasis was pilot training, and to accommodate this phase of the curriculum airfields were built at all three Ordensburgen. The Vogelsang Airfield was built near Walberhof, near the town of Schleiden-Morsbach.

The Ordensburg Vogelsang was also used as a showplace for political notables.

At the outbreak of the war in September 1939, the Orden Junkers departed and the Castle of Vogelsang was handed over to the German army (Deutsche Wehrmacht), which used it twice for billeting troops: in 1940 during the western campaign, and in December 1944 during the Ardennes offensive.

During the interim, Vogelsang hosted a couple of classes of the so-called Adolf-Hitler-Schools. In 1944, a military fitness camp for 15- and 16-year-old members of the Hitler Youth (Hitler-Jugend) was held there. Allied air raids destroyed some of the buildings, including the east wing and the gymnasium.

Use as a military training area since 1946

The buildings destroyed during the war were reconstructed by the Belgian military authorities, and the surviving structures—reduced to bare brickwork—acquired a practical use. The foundation walls constructed for the House of Knowledge (Haus des Wissens) were used for the Van Dooren barrack block, and the adjacent basement, originally intended for an auditorium, became a cinema. This cinema has room for an audience of over 200. Of the decorations, only the emblems of the Third Reich—the swastikas—were removed.

After its period as a military training area came to an end, the former Ordensburg has been open to civilians since 1 January 2006. It can be visited during daytime. The surrounding area is used for hiking trails. The complex will eventually accommodate the administration of the National Park Eifel, the visitor centre, and an exhibition in the Castle. The "Van Dooren" barracks block will be demolished soon because the accommodations are no longer needed. The cinema and all the other buildings still exist.

In 2016 the German government said it would use some of the Vogelsang Barracks blocks to house migrant refugee claimants. [1]

The latest stage of a £40 million facelift is the opening of an exhibition, aiming to educate the young against fascism. The display depicts how ordinary men and women were conditioned by the Nazis to hate Jews and others branded as inferiors.[2]

View from the Urfttal dam