Oranjestad (UK: /ɒˈrænjəstɑːt/ orr-AN-yə-staht,[1] US: /ɔːˈrɑːn-, oʊˈrɑːn-/ or-AHN-, oh-RAHN-,[2][3] Dutch: [oːˈrɑɲəstɑt]; literally "Orange Town") is the capital and largest city of Aruba, a constituent country of the Kingdom of the Netherlands. It is located on the southern coast near the western end of the island country. In the local language, Papiamento, Oranjestad is often referred to as "Playa". In 2015, the population of the capital was 34,980.

The town was built around Fort Zoutman shortly after it was built in 1796. Initially, the town had no official name, being known only as the town on the Bay of Horses (Paardenbaai in Dutch), a place from which native-bred[citation needed] horses were raised and exported to neighboring Curaçao. The town has ever since been the capital city of the island.

The city is named after the first King William I of the Netherlands. The name was conferred on the city in the 1820s when interest in Aruba increased due to the discovery of alluvial gold deposits.

Air Aruba once had its headquarters in Oranjestad.[4] Air Aruba suspended its operations on October 23, 2000.[5]

Tiara Air has had its head office in Oranjestad since 2006, except between 2014 and 2016 when the company suspended services due to the Venezuelan Airline Crisis.[6]

Small portions of the city are formed from a series of man-made expansions of land into the sea. Present-day Renaissance Marketplace (formerly Seaport Marketplace), as well as the adjacent Queen Wilhelmina Park, lies within this land reclamation.

Oranjestad has a hot semi-arid climate (Köppen BSh). Temperatures are high year-round, the air is humid with low diurnal temperature variation also year-round, whilst rainfall is very low due to the region lying in a zone of divergence between the southeast trade winds to the south and the North American Monsoon further north. The exception to this aridity occurs during the short rainy season from October to December when the southward retreat of the Intertropical Convergence Zone generates more frequent moist northeasterly winds. 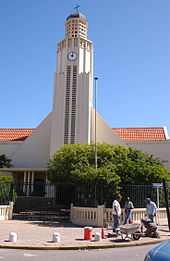 The New Protestant Church in 2004

There is some Dutch Colonial architecture. Due to increased government interest in maintaining the island's cultural heritage, a number of old buildings and houses in the center of town have been transformed into colorfully restored landmarks, such as the lime-colored Civil Registry on Wilhelminastraat.

Oranjestad is home to the football teams SV Dakota, SV Racing Club Aruba, and SV River Plate Aruba, all of which play in the top Aruban Division di Honor.

Several modern recreations have emerged, including the outdoor shopping mall at Royal Plaza, and a few scattered buildings along Main Street and on the Main Square.

Fort Zoutman is one of the town's attractions, others being the tax-free harbour and the Willem III Tower, located near the fort.

There are about eight museums on the island.

The touristically named Renaissance Island (formerly Sonesta Island)[9] is a 40-acre (16 ha) cay (or barrier reef) island, officially known as the Bucuti Rif[10][11] and it is off the coast near Oranjestad. It is privately owned and has the only private beaches on Aruba.[12] There are two beaches: Iguana Beach and Flamingo Beach. A Beechcraft 18 and a Convair 400 were both deliberately sunk about 50 yards (46 m) offshore to create a diving site.[13] Flamingoes can be seen on the island.[14] However, they are not native to Aruba.[15] 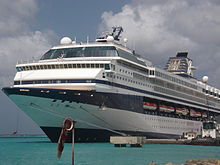 The MV Celebrity Mercury docked in 2006 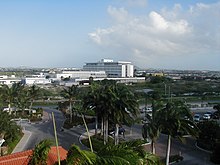 Oranjestad is served by the Queen Beatrix International Airport, 2.5 kilometres (1.6 mi) from the city center. Its downtown is served by a tramway line inaugurated in December 2012.[16][17]

Caya G. F. Betico Croes, also called Main Street, is Aruba's main shopping street in Oranjestad, however in the past few years shoppers have increasingly turned to Lloyd G. Smith Boulevard, the main thoroughfare in the city. This is in part because the boulevard is closer to the cruise ship terminal and harbour area.

Oranjestad houses the largest port on the island capable of docking up to five large vessels. In 2003, over 200 container ships called at the Oranjestad port. A smaller port for shorter cargo vessels is at Barcadera, 5 kilometres (3.1 mi) to the east. Plans have been proposed to increase loading capacity at Oranjestad, and for the construction of a marina to make up for inadequate docking space available for yachts and fishing boats.

Traffic in the center of town is a growing issue for island commuters. The government is under pressure[citation needed] to make improvements to the periphery, which runs around the city. In late 2006 planning began for the installment of a roundabout, along the main boulevard and next to the Free Zone, at one of the island's most troublesome intersections.[citation needed] The plans were completed in 2008. In the meantime, several businesses and government departments have relocated their offices outside of the city centre, spurring a boom in construction and modernisation.[citation needed]

Oranjestad is home to the University of Aruba, which offers programs in law and economics, and to the island's largest secondary school (Colegio Arubano), both modeled on the Dutch system. Many students enroll in universities in the Netherlands for graduate and postgraduate degrees.

Oranjestad is also the location of Xavier University School of Medicine, Aruba, a U.S.-based curriculum medical school. The school offers a 2-year pre-medicine and 4-year medical program leading to an M.D. degree (Doctor of Medicine). All classes are taught in English.