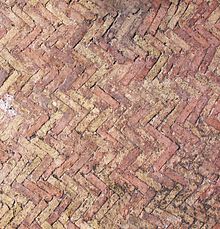 Opus spicatum, literally "spiked work," is a type of masonry construction used in Roman and medieval times. It consists of bricks, tiles or cut stone laid in a herringbone pattern.

Its usage was generally decorative and most commonly it served as a pavement, though it was also used as an infill pattern in walls, as in the striking base of the causeway leading up to the gate tower at Tamworth Castle. Unless the elements run horizontally and vertically, it is inherently weak, since the oblique angles of the elements tend to spread the pattern horizontally under compression. 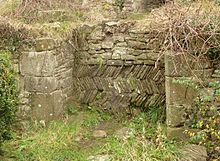 The herringbone method was used by Filippo Brunelleschi in constructing the dome of the Cathedral of Florence (Santa Maria del Fiore).[1]

Herringbone brickwork was also a feature of Gothic Revival architecture.