Opus reticulatum used on the exterior wall of Hadrian's Villa, which was used as a retreat for the Roman Emperor Hadrian in the early 2nd century. 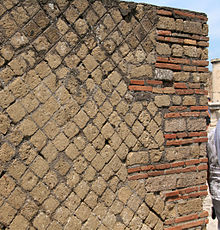 Opus reticulatum (also known as reticulated work) is a form of brickwork used in ancient Roman architecture. It consists of diamond-shaped bricks of tuff, referred to as cubilia,[1] placed around a core of opus caementicium.[2]

Reticulatum is the Latin term for net-like, and opus, the term for a work of art, so the term translates to "net work". The diamond-shaped tufa blocks were placed with the pointed ends into the cement core at an angle of roughly 45 degrees, so the square bases formed a diagonal pattern, and the pattern of mortar lines resembled a net. The initial, rough form of opus reticulatum, an advancement from opus incertum, is called opus quasi reticulatum.

This construction technique was used from the beginning of the 1st century BC, and remained very common until opus latericium, a different form of brickwork, became more common.[2] Examples have even been found in Etruscan cities, such as Rusellae, wherein opus reticulatum is present around the entire perimeter of the Roman amphitheater. As worded by Michael Blömer:

The only examples of opus reticulatum known from the Near East are buildings commissioned by king Herod of Judea [in the baths of Herod's Third Winter Palace at Jericho[3]], the Tomb of Sampsigeramus, a local dynast of Emesa (Homs in Syria) in the 1st century CE and some early Roman monuments in Antioch (Antakya), which was the seat of the Roman governor of Syria.[4]

Opus reticulatum was used as a technique in the Renaissance Palazzo Rucellai in Florence, the skill having been lost with the end of the Roman Empire, and rediscovered by means of archeology by Leon Battista Alberti.