Opus quadratum is an ancient Roman construction technique, in which squared blocks of stone of the same height were set in parallel courses, most often without the use of mortar.[1] The Latin author Vitruvius describes the technique.[2] 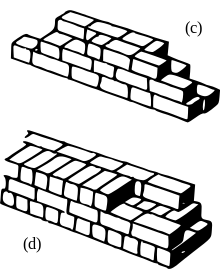 This technique was used by the Romans from about the 6th century BC, and over time the precision and accuracy of the block cutting improved. The technique continued to be used throughout the age of the Roman Empire, even after the introduction of mortar, and was often used in addition to other techniques. The type of stone, the size of the blocks, and the way the blocks were put together can all be used to help archaeologists date structures that display the technique.

In early usage (often called the "Etruscan way"), the joints between the block introduce discontinuities, making the blocks uneven. Examples of such construction can be found in reservoirs, basements, terrace walls, and temple podiums in Etruscan cities and Rome.

With the introduction of Roman concrete, continuous outer walls were often constructed, with some blocks laid as headers in order to attach to the inner wall. Tile or marble can be found cemented to such walls, but this was less common for those structures that were particularly load-bearing, such as arches and pillars used for bridges and aqueducts.