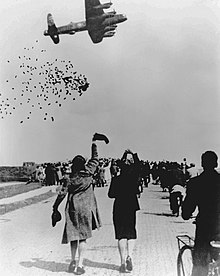 Operation Manna and Operation Chowhound were humanitarian food drops, carried out to relieve a famine in German-occupied Netherlands, undertaken by Allied bomber crews during the final days of World War II in Europe.

Manna was carried out by British RAF units, as well as squadrons from the Australian, Canadian, New Zealand and Polish air forces, between 29 April and 7 May 1945.

Chowhound (1–8 May) was an operation by the U.S. Army Air Forces, which dropped, together with Operation Manna, a total of over 11,000 tons,[1] of food into the still-unliberated western part of the Netherlands, with the acquiescence of the occupying German forces,[2] to help feed Dutch civilians in danger of starvation.

After it was realised that Manna and Chowhound would be insufficient, a ground-based relief operation named Operation Faust was launched. On 2 May, 200 Allied trucks began delivering food to the city of Rhenen, behind German lines.

By early 1945, the situation was growing desperate for the three million or more Dutch still under German control. Prince Bernhard appealed directly to Allied Supreme Commander Dwight D. Eisenhower, but Eisenhower did not have the authority to negotiate a truce with the Germans. While the prince got permission from British Prime Minister Winston Churchill and U.S. President Franklin D. Roosevelt, Eisenhower had Air Commodore Andrew Geddes begin planning immediately. On 23 April, authorisation was given by the Chief of Staff, George Marshall.

Allied agents negotiated with Reichskommissar Arthur Seyss-Inquart and a team of German officers. Among the participants were the Canadian future writer Farley Mowat and the German commander-in-chief, General Johannes Blaskowitz. It was agreed that the participating aircraft would not be fired upon within specified air corridors.

RAF ground crew loading food supplies into slings for hoisting into the bomb bay of an Avro Lancaster heavy bomber of 514 Squadron (1945).

The British operation started first. It was named after the food which was miraculously provided to the Israelites in the Book of Exodus. The planning of the operation was initially done by the Royal Air Force.[3]

The first of the two RAF Avro Lancasters chosen for the test flight, the morning of 29 April 1945, was nicknamed Bad Penny, as in the expression: "a bad penny always turns up".[4] This bomber, with a crew of seven young men (five from Ontario, Canada, including pilot Robert Upcott of Windsor, Ontario), took off in bad weather despite the fact that the Germans had not yet agreed to a ceasefire. (Seyss-Inquart would do so the next day.) Bad Penny had to fly low, down to 50 feet (15 m), over German guns, but succeeded in dropping her cargo and returning to her airfield. 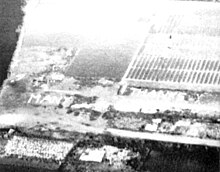 Operation Manna then began in earnest.[5] British aircraft from Groups 1, 3, and 8 took part, flying 145 sorties by Mosquitoes and 3,156 sorties by Lancaster bombers, flying between them a total of 3,301 sorties.

These bombers were used to dropping bombs from 6,000 metres (20,000 ft), but this time they had to do their job from a height of 150 metres (490 ft), some even flying as low as 120 metres (390 ft), as the cargo did not have parachutes.[6] The drop zones, marked by Mosquitoes from 105 and 109 Squadrons using Oboe, were: Katwijk (Valkenburg airfield), The Hague (Duindigt horse race course and Ypenburg airfield), Rotterdam (Waalhaven airfield and Kralingse Plas) and Gouda. Bomber Command delivered a total of 6,680 tons of food.

John Funnell, a navigator on the operation, says the food dropped was tinned food, dried food and chocolate.

As we arrived people had gathered already and were waving flags, making signs, etc., doing whatever they could. It was a marvellous sight. As time went on, so there were also messages, such as Thank you for coming boys. On the 24th April, we were on battle order at Elsham Wolds. We went to a briefing and were told the operation was cancelled because Bomber Harris thought it was too dangerous for the crews. The idea was we would cross the Dutch border at 1,000 feet, and then drop down to 500 feet at 90 knots which was just above stalling speed. On the 29th, we were on battle orders again. There was no truce at that point, and as we crossed the coast, we could see the anti-aircraft guns following us about. We were then meant to rise up to 1,000 feet, but because of the anti-aircraft guns we went down to rooftop level. By the time they sighted on us, we were out of sight. A lot of people were surprised we went without armaments, in case of any trigger-happy tail gunner. Originally, it was going to be 'Operation Spam' which was in my log book. We also went to Lyden, but dropped the food at Falkenburg. We navigators are interested in the latitude and longitude of the place, rather than the name.

The idea was for people to gather and redistribute the food, but some could not resist eating straight away, which caused some people to get sick and vomit, (and some died) a result that fatty food can have in starved bodies known as Refeeding syndrome. On the other hand, distribution sometimes took as long as ten days, resulting in some getting the food only after the liberation. Nevertheless, many lives were saved, and it gave hope and the feeling that the war would soon be over.

Earlier, there had been a distribution of white bread made from Swedish flour that was shipped in and baked locally. A popular myth holds that this bread was dropped from aircraft, but that is a mix-up between the two events. Also, the food was not dropped with parachutes, as is often said.

On the American side, ten bomb groups of the US Third Air Division flew 2,268 sorties beginning 1 May,[3] delivering a total of 4000 tons.[7] 400 B-17 Flying Fortress bombers of the United States Army Air Forces dropped 800 tons of K-rations during 1–3 May on Amsterdam Schiphol Airport.

Recently published in 2015, a book Operation Chowhound[8] is well-documented as to the statistics behind these operations (with a focus on the US side of it, befitting its title).

At least one B-17 crew, that of the Stork Club from the 550th squadron received battle recognition despite having no guns for their humanitarian mission, as a result of German flak.[9]

Three aircraft were lost: two in a collision and one due to engine fire.[10] Bullet holes were discovered in several aircraft upon their return,[11] presumably the result of being fired upon by individual German soldiers.

On 28 April 2007, British Air Commodore Andrew James Wray Geddes was honoured when a hiking trail in the Rotterdam district of Terbregge, the Air Commodore Geddespath, was named after him. This path goes past the Manna/Chowhound monument in the soundwall of the northern ringroad around Rotterdam. The official unveiling of the plaque was performed by Lieutenant-Commander Angus Geddes RN (son of Andrew Geddes) from England and Warrant Officer David Chiverton from Australia (grandson of Geddes).[citation needed]