The Open University of Israel (Hebrew: האוניברסיטה הפתוחה‎, Ha-Universita ha-Ptuha) is a distance-education university in Israel. Its administration center is located in the city of Ra'anana. As of 2015-16, the Open University had around 46,200 students.[1]

The university has more students than any other academic institution in Israel, coming from all over the world. The university is accredited to award undergraduate and postgraduate degrees, diplomas and certificates. 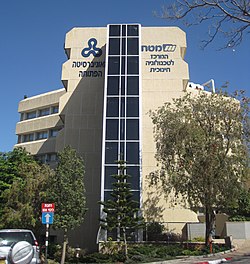 Building of the Educational Technology Center

The Open University of Israel was conceived in 1971 and founded in 1974, modeled after the UK's Open University. The first semester of studies commenced on October 17, 1976. In 1980, the Open University was officially recognized as an institute of higher learning in Israel, and was accredited to award undergraduate or bachelor's degrees (BA). In 1982, 41 graduates were awarded BA diplomas at the university's first diploma ceremony.

In 2010, the Open University began offering online courses taught in Russian. Students could enroll worldwide for 24 courses, most of them with Israeli or Jewish content. According to the online program, examinations can be held at Israeli consulates and Jewish Agency offices around the world.[4] Mimi Ajzenstadt is the President of the university.

Campus of the Open University of Israel 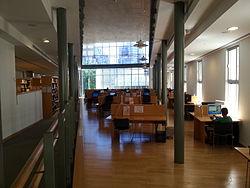 Library of Open University of Israel

The Open University is open to anyone who wishes to study towards a bachelor's degree, without any prerequisites or screening process. However, the Open University still has high standards and demands academic achievements from its graduates. Another way in which the Open University is open is in the study path it offers to its students. When enrolling in the university, the student does not need to decide the primary focus of his or her degree, nor to determine in advance the pace of the degree (how many years the studies will take). In fact, it is possible to take only a single course or several courses without receiving a degree, or to take several courses per semester, until finally enough courses relevant to a certain academic area have been taken to be eligible for a degree.

To achieve these goals, the Open University employs distance education. The university has no single central campus, or rigid schedules, making it especially well-suited to those who are preoccupied with a job, army service, or their family.

The most important aspect of studying in the Open University is self-study from books. Each of the university's courses has a specially-prepared book with the course material and exercises, from which the students study on their own. The Open University's books and teaching aids have become quite popular in Israel's other universities and colleges as well.

To supplement the self-study, there are occasional group meetings, where the students can ask the teacher questions about the material, and talk to other students who take the same course. These meetings take place throughout Israel, and are optional to attend. The students can also use the university's Internet site ("TELEM") to communicate with the teachers or with other students. Some courses also feature video cassettes, multimedia CDs, and other audio-visual aids. Recently, video-conferencing technology has also enabled viewing a real-time lecture without the students all coming to a single campus. For each course, students must complete several required assignments, and take a final exam. To obtain a degree, students must participate in one or more seminar courses, depending on the academic program. The examination of seminar papers is carried out by academic staff members of Israel's universities.

The Open University also has master's degree programs for some of the areas it teaches, but they are not open to everyone and do have acceptance criteria. At present, the university does not offer doctoral programs.

Affiliation with other universities

Since 2007, the transfer options are available to: