The Treaty on Open Skies entered into force on January 1, 2002, and currently has 35 party states. It establishes a program of unarmed aerial surveillance flights over the entire territory of its participants. The treaty is designed to enhance mutual understanding and confidence by giving all participants, regardless of size, a direct role in gathering information about military forces and activities of concern to them. Open Skies is one of the most wide-ranging international efforts to date promoting openness and transparency of military forces and activities. The concept of "mutual aerial observation" was initially proposed to Soviet Premier Nikolai Bulganin at the Geneva Conference of 1955 by President Dwight D. Eisenhower; however, the Soviets promptly rejected the concept and it lay dormant for several years. The treaty was eventually signed as an initiative of U.S. president (and former Central Intelligence Agency Director) George H. W. Bush in 1989. Negotiated by the then-members of NATO and the Warsaw Pact, the agreement was signed in Helsinki, Finland, on March 24, 1992.[2]

This treaty is not related to civil-aviation open skies agreements.[3]

The Open Skies treaty is one of unlimited duration, and is open to accession by other states. Republics of the former Soviet Union (U.S.S.R.) that have not already become state parties to the treaty may join it at any time. Applications from other interested countries are subject to a consensus decision by the Open Skies Consultative Commission (OSCC).[2] Eight countries have joined into the treaty since it entered into force in 2002: Bosnia and Herzegovina, Croatia, Estonia, Finland, Latvia, Lithuania, Slovenia, and Sweden. Notably missing are Austria, Cyprus, Ireland, Switzerland, Serbia, Montenegro, Albania, North Macedonia, Moldova, Armenia and Uzbekistan. The Republic of Cyprus submitted its application to accede the Treaty in 2002; since then, however, Turkey has blocked its accession.[citation needed]

The Open Skies Consultative Commission is the implementing body for the Treaty on Open Skies.[4] It comprises representatives from each state party to the treaty and meets monthly at the Vienna headquarters of the Organization for Security and Co-Operation in Europe.

Basic elements of the treaty

The Open Skies regulations covers the territory over which the parties exercise sovereignty, including mainland, islands, and internal and territorial waters. The treaty specifies that the entire territory of a member state is open to observation. Observation flights may only be restricted for reasons of flight safety and not for reasons of national security.[2]

Observation aircraft may be provided by either the observing party or by the observed party (the "taxi option"), at the latter's choice. All Open Skies aircraft and sensors must pass specific certification and pre-flight inspection procedures to ensure that they are compliant with treaty standards.[2]

Canada uses a C-130 Hercules aircraft equipped with a "SAMSON" sensor pod to conduct flights over other treaty nations. The pod is a converted CC-130 fuel tank modified to carry the permitted sensors, along with associated on-board mission systems. A consortium of nations consisting of Belgium, Netherlands, Luxembourg, Canada, France, Greece, Italy, Portugal and Spain own and operate this system. The costs of maintaining the SAMSON Pod are shared, based on each nation's flight quota and actual use.[citation needed] 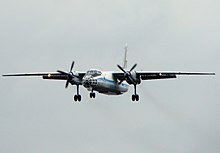 Bulgaria, Romania, Russia and Ukraine use the Antonov An-30 for their flights. The Czech Republic also used to use the An-30 for this purpose but apparently retired all of theirs from service in 2003.[citation needed]

Russia also uses a Tu-154M-ON monitoring aircraft. Germany formerly used this type as well until the aircraft was lost in a 1997 accident. Russia is phasing out both An-30 and Tu-154M-ON and replacing them with two Tu-214ON with the registrations RA-64519 and RA-64525. This aircraft's new sensor suite, though, is being challenged by the US.[citation needed]

In 2017, the German Air Force purchased an Airbus A319 as its future Open Skies aircraft.[6]

Open Skies aircraft may have video, optical panoramic and framing cameras for daylight photography, infra-red line scanners for a day/night capability, and synthetic aperture radar for a day/night all weather capability. Photographic image quality will permit recognition of major military equipment (e.g., permit a member state to distinguish between a tank and a truck), thus allowing significant transparency of military forces and activities. Sensor categories may be added and capabilities improved by agreement among member states. All sensors used in Open Skies must be commercially available to all signatories.[2] Imagery resolution is limited to 30 centimetres.[7][citation needed]

Imagery collected from Open Skies missions is available to any state party upon request for the cost of reproduction. As a result, the data available to each state party is much greater than that which it can collect itself under the treaty quota system.[2]

At a Geneva Conference meeting with Soviet Premier Nikolai Bulganin in 1955, President Eisenhower proposed that the United States and Soviet Union conduct surveillance overflights of each other's territory to reassure each country that the other was not preparing to attack.[8] The fears and suspicions of the Cold War led Soviet General Secretary Nikita Khrushchev to reject Eisenhower's proposal.[8][9]

During a five-day summit conference held in Geneva, Switzerland, at the end of July 1955, the Soviet Union and United States held serious talks about disarmament and the United States put forward proposals for mutual reconnaissance flights over each other's air space, known as the Open Skies proposal. The United States had a large number of RB-47 and RB-36 reconnaissance aircraft at its disposal for such activities. However, the Soviets turned down this proposal. This Geneva Conference was nonetheless accepted as a turning point in the Cold War. The tensions in Europe were felt to be a stalemate. Both the Soviet Union and United States were willing to talk about their differences, rather than increase them into a state of war.

On March 24, 1992,[1] the Open Skies Treaty was signed in Helsinki by Secretary of State James Baker and foreign ministers from 23 other countries. The treaty entered into force on January 2, 2002, after Russia and Belarus completed ratification procedures.[9]

In November 1992, President Bush assigned responsibility for overall training, management, leadership, coordination and support for U.S. Open Skies observation missions to the On-Site Inspection Agency (OSIA), now a part of the Defense Threat Reduction Agency (DTRA). Until entry into force in January 2002, DTRA support for the treaty involved participating in training and joint trial flights (JTFs). The U.S. has conducted over 70 JTFs since 1993. By March 2003, DTRA had successfully certified 16 camera configurations on the OC-135B aircraft. They also had contributed to the certification of the Bulgarian An-30, Hungarian An-26, SAMSON POD Group (see above) C-130H, Romanian An-30, Russian An-30, and Ukrainian An-30. The United States successfully flew its first Open Skies mission over Russia in December 2002.[9]

Since 2002 a total of 40 missions have taken place over the U.K. There were 24 quota missions conducted by: Russia – 20; Ukraine – three; and Sweden – one. There were 16 training flights conducted by: Benelux (joint with Estonia); Estonia (joint with Benelux); Georgia – three (one joint with Sweden); Sweden – three (one joint with Georgia); US – three; Latvia; Lithuania; Romania; Slovenia; and Yugoslavia.[11] Also since 2002 the U.K. has undertaken a total of 51 open skies missions – 38 were quota missions to the following countries: Ukraine (five); Georgia (seven) and Russia (26); 13 missions were training missions to the following nations: Bulgaria; Yugoslavia; Estonia; Slovenia (three); Sweden (three); US; Latvia, Lithuania and the Benelux. The flights cost approximately £50,000 per operational mission, and approximately £25,000 for training missions with an approximate annual cost of £175,000.[12]

Russian Defence Ministry spokesman stated on 4 February 2016 that Turkey had refused a Russian Open Skies mission, planned to take place in 1–5 February 2016, to fly over areas adjacent to Syria, as well as over NATO airbases. According to Russia, Turkey gave no explanation regarding the limitations, and claimed them to indicate illegal military activity in Syrian territory.[13] The OSCC has not commented on the alleged violation of the Treaty by Turkey.[14]

Challenges to the treaty

Both Russia and the United States have alleged that the other is violating the provisions of the treaty.[18] U.S. Secretary of State Mike Pompeo cited for example Russia's access refusal in the Russian-controlled areas of Georgia.[19] In 20 September 2019, the U.S. and Canada were denied access to a military exercise in central Russia.[20]

In October 2019, according to documents from the House of Representatives, the United States' President is considering a U.S. withdrawal from the Open Skies Treaty.[21][22] NATO allies and partners, in particular Ukraine, are against the move, fearing it would license Russia to reduce further or ban overflights, thus reducing their knowledge of Russian military movements.[23]

In April 2020, it was reported that Secretary of State Mike Pompeo and Secretary of Defense Mark Esper have agreed to proceed with U.S. withdrawal from the Treaty on Open Skies.[24] On May 21, 2020, President Trump announced that the United States would be withdrawing from the treaty due to alleged Russian violations.[25]