Omsk (/ɒmsk/; Russian: Омск, IPA: [omsk]; Siberian Tatar: Qara-tora) is a city and the administrative center of Omsk Oblast, Russia, located in southwestern Siberia 2,236 kilometers (1,389 mi)[13] from Moscow. With a population of 1,154,116, it is Russia's third-largest city east of the Ural Mountains after Novosibirsk and Yekaterinburg, and seventh by size nationally.[6] Omsk acts as an essential transport node, serving as a train station for Trans-Siberian Railway and as a staging post for the Irtysh River.

Omsk serves as the episcopal see of the bishop of Omsk and Tara, as well as the administrative seat of the Imam of Siberia. The mayor is Oksana Fadina.

The wooden fort of Omsk was built in 1716 by a cossack unit led by Ivan Buchholz to protect the expanding Russian frontier along the Ishim and the Irtysh rivers against the Kyrgyz and Dzungar nomads of the Steppes.[14] In 1768 Om fortress was relocated. The original Tobolsk and the restored Tara gates, along with the original German Lutheran Church and several public buildings are left from that time. Omsk was granted town status in 1782.[15]

In 1822 Omsk became an administrative capital of Western Siberia and later in 1882 the center of the vast Steppes region (today the northern part of Kazakhstan) and Akmolinsk Oblast, in particular acquiring several churches and cathedrals of various denominations, mosques, a synagogue, the governor-general's mansion, and a military academy.[16] But as the frontier receded and its military importance diminished, the town fell into lethargy. For that time Omsk became a major center of the Siberian exile. From 1850 to 1854 Fyodor Dostoyevsky served his sentence in an Omsk katorga prison.

Development of the city was catalyzed with the construction of the Trans-Siberian Railway in the 1890s that affected significance of Omsk as a logistic hub. Many trade companies established stores and offices in Omsk defining the character of the city center. British, Dutch, and German consulates were established roughly at the same time in order to represent their commercial interests. The pinnacle of development for pre-revolutionary Omsk was the Siberian Exposition of Agriculture and Industry in 1910. Popularity of the World Fairs contributed to the image of Omsk as the "Chicago of Siberia".[17]

Soon after the October Revolution, anti-Bolshevik White forces seized control of Omsk. The "Provisional All-Russian Government" was established here in 1918, headed by the Arctic explorer and decorated war hero Admiral Kolchak. Omsk was proclaimed the capital of Russia, and its central bank was tasked with safekeeping the former empire's gold reserves. These were guarded by a garrison of former Czechoslovakian POWs trapped in Siberia by the chaos of World War I and the subsequent Revolution.[citation needed] Omsk became a prime target for the Red Army leadership, which viewed it as a major target of their Siberian campaign and eventually forced Kolchak and his government to abandon the city and retreat along the Trans-Siberian eastward to Irkutsk. Bolshevik forces entered the city in 1919. 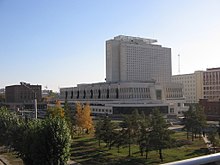 The Soviet government preferred the young Novonikolayevsk (later known as Novosibirsk) as the administrative center of Western Siberia, prompting the mass transfer of administrative, cultural, and educational functions from Omsk. This somewhat stunted Omsk's growth and sparked a continuing rivalry between the two cities.[18] Omsk received new life as a result of World War II. Because it was both far from the fighting and had a well-developed infrastructure, Omsk provided a perfect haven for much of the industry evacuated away from the frontlines in 1941. Additionally, contingency plans were made to transfer the provisional Soviet capital to Omsk in the event of a German victory during the Battle of Moscow (October 1941 to January 1942).[19] At the end of the war, Omsk remained a major industrial center, subsequently becoming a leader in Soviet military production.

Leningrad bridge over the Irtysh

In the 1950s, following the development of the oil and natural-gas field in Siberia, an oil-refining complex was built, along with an entire "town of oil workers", expanding Omsk northward along the Irtysh. It is currently the largest such complex in Russia. Gazprom Neft, the parent company, is the largest employer in the city, wielding its tax rates as leverage in negotiations with municipal and regional authorities.

Following the dissolution of the Soviet Union, Omsk experienced a period of economic instability and political stagnation. Most of the city's large businesses, which had previously been state owned, were fought over by members of the former party elite, the emerging nouveau riche, and fast growing criminal syndicates. The most notorious cases involved the privatization of Sibneft, a major oil company, which dragged on for several years. Until the end of the 1990s, political life in Omsk was defined by an ongoing feud between the oblast and city authorities. The resulting conflict made at least two points of view available to the public and served as the impetus for some improvements to the city's infrastructure and cultural life. These included the construction of new leisure parks and the renovation of the city's historic center, the establishment of the annual Siberian International Marathon, and of the annual City Days Festival. Despite this, internal political competition drained the Omsk's resources and served as a major obstacle for smooth government operations and city development.

Omsk is situated in the south of the West Siberian Plain along the banks of the north-flowing Irtysh at its confluence with the Om River. The city has an elevation of 87 meters (285 ft) above mean sea level at its highest point.

Omsk is an important railroad hub, and is the junction point for the northern and southern branches of the Trans-Siberian Railway. The city also serves as a major hub for the regional highway network. River-port facilities handle both passengers and freight, giving the city access to navigating the extensive waterways of the Irtysh and Ob River. The waterways connect Omsk with the coal and mineral-mining towns further up the river in Kazakhstan, as well as with the oil, natural gas and lumber operations of northern Siberia. Omsk is served by the Tsentralny Airport, which offers access to domestic and international (primarily, German and Kazakh) destinations, making the city an important aviation hub for Siberia and the Russian Far East. 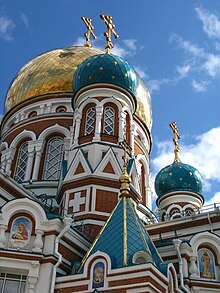 The architectural centerpiece of the city is an ensemble of buildings along Lyubinsky Avenue/Lenina Street, anchored by the former Gostiny Dvor, and flanked by two chapels. The area is an eclectic mix of architectural styles, dominated by Art-Nouveau, Neoclassical and Second Empire.

Closer to the confluence of the Om and the Irtysh are the few surviving sombre buildings of the 18th-century fortress. The largest and most opulent church in the city is the Dormition Cathedral, a five-domed edifice in the Russian Revival style, consecrated in 1896, demolished by the Soviets, and restored in the first decade of the 21st century.[citation needed]

Another area of interest is Nikolsky Avenue-Krasnykh Zor Street, where a line of merchants' wooden houses still stands. The street leads to the Neoclassical cathedral of St. Nicholas, which was commissioned by the Cossacks, designed by Vasily Stasov and consecrated in 1840. It contains various relics of the Siberian Cossacks.[24]

As a prominent educational center, Omsk has a number of museums, theaters, music venues, and educational institutions.

Among Omsk's museums, the most notable are:

Theaters include the Omsk Opera, The Omsk Theater of Drama, The Omsk Circus, Omsk State Music Theater, and a number of smaller venues.

Omsk is home to many institutions of higher learning and several universities: 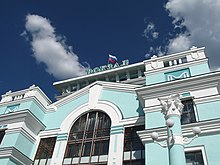 The picture of the Omsk railway station

Omsk is a major rail, road, and air hub. The city is served by a station on the Trans-Siberian Railway, and by the Tsentralny Airport. Additionally, Omsk possesses a river port on the Irtysh, offering service to domestic destinations and to cities within Kazakhstan.

Municipal Transport consists of a large bus and trolley, and tram networks, although the latter of these has deteriorated severely since the collapse of the USSR. marshrutkas (shared taxis) supplement municipal transit networks.

A Metro system, proposed in the late 1980s, but postponed for lack of funds, is currently under construction, with the Metro bridge over the Irtysh River. The bridge is already opened for cars (upper level), but the metro (lower level) is still under construction. As a first step, one short line will connect the districts in the northwest with the city center. As of 2017, only one station is open and serves as a pedestrian subway.