Oligarchy (from Greek ὀλιγαρχία (oligarkhía); from ὀλίγος (olígos), meaning 'few', and ἄρχω (arkho), meaning 'to rule or to command')[1][2][3] is a form of power structure in which power rests with a small number of people. These people may be distinguished by nobility, wealth, education, corporate, religious, political, or military control. Such states are often controlled by families who pass their influence from one generation to the next, but inheritance is not a necessary condition of oligarchy.

Throughout history, oligarchies have often been tyrannical, relying on public obedience or oppression to exist. Aristotle pioneered the use of the term as meaning rule by the rich,[4] for which another term commonly used today is plutocracy. In the early 20th century Robert Michels developed the theory that democracies, as all large organizations, have a tendency to turn into oligarchies. In his "Iron law of oligarchy" he suggests that the necessary division of labor in large organizations leads to the establishment of a ruling class mostly concerned with protecting their own power.

This was already recognized by the Athenians in the fourth century BCE: after the restoration of democracy from oligarchical coups, they used the drawing of lots for selecting government officers to counteract that tendency toward oligarchy in government.[5][page needed] They drew lots from large groups of adult volunteers to pick civil servants performing judicial, executive, and administrative functions (archai, boulē, and hēliastai).[6] They even used lots for posts, such as judges and jurors in the political courts (nomothetai), which had the power to overrule the Assembly.[7]

The exclusive consolidation of power by a dominant religious or ethnic minority has also been described as a form of oligarchy.[8] Examples of this system include South Africa under apartheid, Liberia under Americo-Liberians, the Sultanate of Zanzibar, and Rhodesia, where the installation of oligarchic rule by the descendants of foreign settlers was primarily regarded as a legacy of various forms of colonialism.[8]

The modern United States has also been described as an oligarchy because economic elites and organized groups representing special interests have substantial independent impacts on U.S. government policy, while average citizens and mass-based interest groups have little or no independent influence.[9]

A business group might be defined as an oligarch if it satisfies the following conditions:

(1) owners are the largest private owners in the country

(2) it possesses sufficient political power to promote its own interests

Since the collapse of the Soviet Union and privatization of the economy in December 1991, privately owned Russia-based multinational corporations, including producers of petroleum, natural gas, and metal have, in the view of many analysts, led to the rise of Russian oligarchs.[11] Most of these are connected directly to the highest-ranked government officials, such as President.

The Ukrainian oligarchs are a group of business oligarchs that quickly appeared on the economic and political scene of Ukraine after its independence in 1991. Overall there are 35 oligarchic groups [10]

The Zimbabwean oligarchs are a group of liberation war veterans who form the Zimbabwe African National Union - Patriotic Front, a colonial liberation party. The philosophy of the Zimbabwean government is that Zimbabwe can only be governed by a leader who took part in the pre-independence war. The motto of ZANU-PF in Shona is "Zimbabwe yakauya neropa", meaning Zimbabwe was born from the blood of the sons and daughters who died fighting for its independence. The born free generation (born since independence in 1980) has no birthright to rule Zimbabwe.[citation needed] 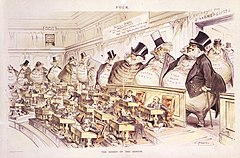 "The Bosses of the Senate", corporate interests as giant money bags looming over senators.[12]

Some contemporary authors have characterized current conditions in the United States as oligarchic in nature.[13][14] Simon Johnson wrote that "the reemergence of an American financial oligarchy is quite recent", a structure which he delineated as being the "most advanced" in the world.[15] Jeffrey A. Winters wrote that "oligarchy and democracy operate within a single system, and American politics is a daily display of their interplay."[16] The top 1% of the U.S. population by wealth in 2007 had a larger share of total income than at any time since 1928.[17] In 2011, according to PolitiFact and others, the top 400 wealthiest Americans "have more wealth than half of all Americans combined."[18][19][20][21]

In 1998, Bob Herbert of The New York Times referred to modern American plutocrats as "The Donor Class"[22][23] (list of top donors)[24] and defined the class, for the first time,[25] as "a tiny group—just one-quarter of 1 percent of the population—and it is not representative of the rest of the nation. But its money buys plenty of access."[22]

French economist Thomas Piketty states in his 2013 book, Capital in the Twenty-First Century, that "the risk of a drift towards oligarchy is real and gives little reason for optimism about where the United States is headed."[26]

A study conducted by political scientists Martin Gilens of Princeton University and Benjamin Page of Northwestern University was released in April 2014,[27] which stated that their "analyses suggest that majorities of the American public actually have little influence over the policies our government adopts." The study analyzed nearly 1,800 policies enacted by the US government between 1981 and 2002 and compared them to the expressed preferences of the American public as opposed to wealthy Americans and large special interest groups.[28] It found that wealthy individuals and organizations representing business interests have substantial political influence, while average citizens and mass-based interest groups have little to none. The study did concede that "Americans do enjoy many features central to democratic governance, such as regular elections, freedom of speech and association, and a widespread (if still contested) franchise." Gilens and Page do not characterize the US as an "oligarchy" per se; however, they do apply the concept of "civil oligarchy" as used by Jeffrey Winters with respect to the US. Winters has posited a comparative theory of "oligarchy" in which the wealthiest citizens – even in a "civil oligarchy" like the United States – dominate policy concerning crucial issues of wealth- and income-protection.[29]

Gilens says that average citizens only get what they want if wealthy Americans and business-oriented interest groups also want it; and that when a policy favored by the majority of the American public is implemented, it is usually because the economic elites did not oppose it.[30] Other studies have questioned the Page and Gilens study.[31][32][33]

In a 2015 interview, former President Jimmy Carter stated that the United States is now "an oligarchy with unlimited political bribery" due to the Citizens United v. FEC ruling which effectively removed limits on donations to political candidates.[34] Wall Street spent a record $2 billion trying to influence the 2016 United States presidential election.[35][36]