The Oldsmobile V8, also referred to as the Rocket, is series of engines that was produced by Oldsmobile beginning in 1949. The Rocket, along with the 1949 Cadillac V8, were the first post-war OHV V8 engines produced by General Motors. Like all other GM divisions, Olds continued building its own V8 engine family for decades, adopting the corporate Chevrolet 350 small-block and Cadillac Northstar engine only in the 1990s. All Oldsmobile V8s were manufactured at plants in Lansing, Michigan.

The Rocket V8 was the subject of many first and lasts in the automotive industry. It was the first mass-produced OHV V8, in 1949.

As is the case with all pre-1972 American passenger car engines, published horsepower and torque figures for those years were SAE "Gross," as opposed to 1972 and later SAE Net ratings (which are indicative of what actual production engines produce in their "as installed" state - with all engine accessories, full air cleaner assembly, and complete production exhaust system in place).

The first generation of Oldsmobile V8s ranged from 1949-1964. Each engine in this generation is quite similar with the same size block and heads.

The 303-cubic-inch (5.0 L) engine had hydraulic lifters, an oversquare bore:stroke ratio, a counterweighted forged crankshaft, aluminum pistons, floating wristpins, and a dual-plane intake manifold. The 303 was produced from 1949-1953. Bore was 3.75 in (95 mm) and stroke was 3.4375 in (87.31 mm). Cadillac used a distantly related engine which appeared in three different sizes through to the 1962 model year; though the Oldsmobile and Cadillac motors were not physically related, many lessons learned by one division were incorporated into the others design, and the result were two engines known for their excellent power-to-weight ratio, fuel economy, and smooth, strong, reliable running.

The original Oldsmobile V8 was to have been marketed as "Kettering Power" after chief engineer Charles Kettering, but company policy prohibited the use of his name. Instead, the legendary Rocket was born, available in Oldsmobile's 88, Super 88, and 98 models. The engine proved so popular, the division's 88 models were popularly called Rocket 88s. 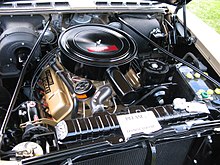 Introduced in the middle of the 1957 model year,[4] the 1957 and 1958 J-2 Golden Rocket had three two-barrel (twin choke) carburetors with a vacuum-operated linkage. Only the center carburetor was mechanically connected to the throttle pedal, and it was the only one equipped with a choke. When the center carburetor was opened to 60° or more engine vacuum drawn from the windshield wiper pump would simultaneously open the front and rear carburetors. These carburetors did not open progressively; they were either open or closed. The J-2 engine also had a slightly thinner head gasket, raising compression to 10.0:1. It was advertised with gross power and torque ratings of 312 hp (233 kW) at 4600 rpm and 415 lb⋅ft (563 N⋅m) at 2800 rpm. Oldsmobile charged $83 for the J-2 option with the three-speed manual (or in the 98),[5] $314 dollars with the automatic.[6]

The Buick version of the 215 V8 went on to become the well known Rover V8, which still remains in limited production, utilizing the Buick-style pistons, heads, and valve train gear.

The Oldsmobile engine block formed the basis of the Repco 3-liter engine used by Brabham to win the 1966 and 1967 Formula One world championships. The early Repco engines produced up to 300 bhp (220 kW), and featured new SOHC cylinder heads and iron cylinder liners. The 1967 and later versions of the Repco engine had proprietary engine blocks.

In the mid-1980s, hot rodders discovered the 215 could be stretched to as much as 305 cu in (5 l), using the Buick 300 crankshaft, new cylinder sleeves, and an assortment of non-GM parts.[11] It could also be fitted with high-compression cylinder heads from the Morgan +8. Using the 5 liter Rover block and crankshaft, a maximum displacement of 317.8 cu in (5,208 cc) is theoretically possible.[12]

Oldsmobile Turbo-Rocket V8 in a 1962 Jetfire. The turbocharger, painted red, is clearly visible.

In 1962 and 1963 Oldsmobile built a turbocharged version of the 215, designated Turbo-Rocket. The turbocharger fitted to the V8 engine was a small-diameter Garrett T5 model with integral wastegate, manufactured by Garrett AiResearch, and produced a maximum of 5 psi (34 kPa) boost at 2200 rpm. The engine had 10.25:1 compression and a single-barrel carburetor. It was rated at 215 hp (160 kW) at 4600 rpm and 300 lb⋅ft (410 N⋅m) at 3200 rpm. In development, the high compression ratio combined with the charged load created problems with spark knock on hard throttle applications, which led Olds to develop and utilize a novel water-injection system that sprayed metered amounts of distilled water and methyl alcohol (dubbed "Turbo-Rocket Fluid") into the intake manifold air-stream to cool the intake charge. If the fluid reservoir was empty, a complex double-float and valve assembly in the Turbo-Rocket Fluid path would set a second butterfly (positioned between the throttle butterfly and the turbocharger) into the closed position, limiting the amount of boost pressure. Unfortunately, many customers did not keep the reservoir filled, or had mechanical problems with the turbocharger system which resulted in many of the turbo-charger installations being removed and a conventional 4 barrel carburetor and manifold installed in its place.

The Turbo-Rocket V8 was offered exclusively on the Oldsmobile Jetfire, a special version of the Cutlass compact hardtop coupe, which is noteworthy as it one of the world's first (in fact the second) turbocharged passenger car ever offered for public sale. The Chevrolet Corvair Spyder Turbo, likewise a forced induction i.e turbo-powered car, predated the Oldsmobile Jetfire Turbo, however by only a few weeks[citation needed], thus being the world's very first turbocharged commercially sold vehicle.

These were wedge-head engines with a unique combustion chamber that resulted from a valve angle of only 6°. This was much flatter than the 23° of the small-block Chevrolet and 20° of the Ford small-block wedge heads. This very open and flat chamber was fuel efficient and had lower than average emissions output. It was the only GM engine to meet US emission standards using a carburetor all the way up to 1990.

The first second-generation Oldmobile V8 330 cu in (5.4 L) "Jetfire Rocket" introduced in 1964 and produced through 1967. It was released one year earlier than the tall deck 425, and debuted the standard 3.385 in (86.0 mm) stroke; bore was 3.938 in (100.0 mm). 330s were painted gold and had forged steel crankshafts. The 4 barrel versions had a larger diameter harmonic damper, the 2 barrel only a balancer hub without the rubberized outer ring.

"Early 400s" used the same forged steel crankshaft as the 425, while "later 400s" used the same cast iron crankshaft of the 455, with rare exceptions; some 1968 and later Olds 400/455s were produced with forged steel crankshafts. These rare cranks can be readily spotted by the "J" shaped notch in the OD of the rear flange; cast iron cranks have a "C" shaped notch. All 1965-1969 Olds 400s were painted bronze.

The 1967 400 engine was a short stroke 1966-1967 only engine. It featured B and C cast large valve cylinder heads and hydraulic lifters are larger in diameter and push rods are different length and diameter than the standard Olds Rocket V8 it was rated at 350 horsepower and 440 lb/ft of torque with a Rochester 4 barrel and 360 hp with the L69 tri 2 barrel option in 1966 and 360 hp in 1967 it was equipped with a W30 camshaft and outside air induction, 502 factory examples of this engine were produced. They were all painted Bronze and had V and G stamped on the cylinder heads.400 cu in (6.6 L) V8.

A special 1965-1967 425 cu in (7.0 L) V8 was the Starfire engine. The main distinguishing features of this engine were a slightly different camshaft profile from the standard ultra high compression engine and factory dual exhaust. This engine was only available in the Oldsmobile Starfire and a performance economy model called the Jetstar I. It shared the same compression ratio of the Toronado Rocket at 10.5:1. It also used the .921 in lifter bore size of the Toronado Rocket. 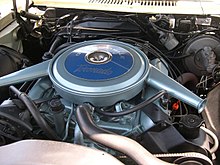 An Ultra High Compression Toronado Rocket version of the 425 cu in (7.0 L) V8 was made for the 1966 Toronado. It had the same 0.921 in (23.4 mm)-diameter lifters of the first-generation Oldsmobile engines, rather than the standard 0.842 in (21.4 mm), which let engineers increase the camshaft's ramp speed for more power, 385 hp (287 kW), without sacrificing idle or reliability. Unlike all other 425s, this version was painted slate blue metallic.

The 455 big block Olds V8 was replaced in 1977 with the 403 cu in (6.6 L) small block, which used a 4.351 in (110.5 mm) bore, the largest ever used in a small-block V8, with the Olds small-block standard deck and 3.385 in (86.0 mm) stroke. The bore was so wide that the cylinder walls were siamesed, as in the Chevrolet 400 V8, with no space for coolant to flow between the cylinders. This sometimes led to overheating problems.[citation needed] Some very early 403s were painted metallic blue like the 455, but most were painted GM Corporate Blue.[citation needed]

The Olds 403 was used by Buick and Pontiac in addition to Oldsmobile until its discontinuation after 1979. Output was 185 hp (138 kW) and 320 lb⋅ft (430 N⋅m). Uniquely in the 1977 Toronado, the 403 engine was fitted with a crank triggered ignition system.[citation needed] Parts peculiar to this system include a toothed disc between the harmonic balancer and the crank pulley, the "adjacent sensor" (an early form of crankshaft position sensor), a special distributor, an engine temperature sensor, and a rudimentary computer mounted inside the car, under the dashboard.

A smaller 260 cu in (4.3 L) V8 was created in 1975 by decreasing the bore to 3.5 in (89 mm). It produced 105 hp (78 kW) and 205 lb⋅ft (278 N⋅m).[citation needed], and had a sales code of LV8.[citation needed] This was the first engine to use the smaller Rochester Dualjet two-barrel carburetor, the only carburetor used on the 260.[citation needed] Production of the 260 V8 ended in 1982 when the 307 became the only gasoline V8 in Oldsmobile's line. The 260 was designed for economy, and was the first engine option above the 3.8 L Buick V6 standard in many Oldsmobile models by the late 1970s. While the 260s were not very powerful compared to the larger 350 and 403 V8s, fuel economy was almost as good as the base V6.[citation needed] Compared to the V6, the 260 was also smoother-running, and far more durable.[citation needed] Most 260s were coupled to the Turbo Hydramatic 200 transmission,[citation needed] but a 5-speed manual transmission was also available in some vehicles.

The horsepower output of the 307 wasn't particularly high; the standard-specification 307 in the 1983 Oldsmobile 98 put out 140 hp (100 kW), although in that year a high-output version was available producing a nominal 180 hp (130 kW) and 245 lb⋅ft (332 N⋅m) torque.[citation needed] The final 1990 configuration was rated at 140 hp (100 kW) at 3200 rpm and 255 lb⋅ft (346 N⋅m) of torque at 2000 rpm.[citation needed] The combination of good low-RPM torque, the Quadrajet four-barrel carburetor, and the THM-200-4R four-speed overdrive automatic transmission with lockup torque converter allowed for fairly good performance,[according to whom?] and fuel economy considered reasonable for the era,[according to whom?] even in the larger and heavier model cars.[citation needed] The engine is also known for its reliability, smoothness and quietness.[according to whom?]

The LG8 was an updated version of the 307 produced from 1983 to 1987. Performance modifications included a more aggressive camshaft, stiffer valve springs, a larger vibration damper, a Y-pipe dual-outlet exhaust system,[clarification needed] and richer secondary metering rods in the carburetor.[citation needed] It was offered in the Hurst/Olds version of the Oldsmobile Cutlass Calais and in the 4-4-2 version of the Oldsmobile Cutlass Salon. Output for 1983-1985 was 180 hp (130 kW) and 245 lb⋅ft (332 N⋅m). Revisions to the engine for 1986 included roller lifters with a slightly smaller camshaft, new heads with smaller, swirl-port intake runners, floating piston pins, and larger piston dishes for lower compression (8.0:1 v. 8.4:1). These changes increased torque to 250 lb⋅ft (340 N⋅m) but lowered power to 170 hp (130 kW), while lowering the RPM at which peak power and torque were achieved.

The Generation II V8 ended production in 1990. The company later introduced a new vehicle, the Oldsmobile Aurora, with a new generation V8. Based on the Cadillac Northstar engine, this, called Aurora, was a DOHC design.

From the 1950s through the late 1970s, each GM division had its own V8 engine family. Many were shared among other divisions, but each design was unique:

GM later standardized on the later generations of the Chevrolet design: