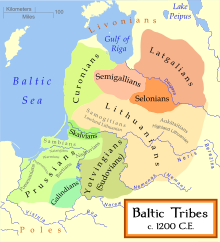 Distribution of the Baltic tribes, circa 1200 CE (boundaries are approximate).

Old Prussian was a Western Baltic language belonging to the Balto-Slavic branch of the Indo-European languages, once spoken by the Old Prussians, the Baltic peoples of the Prussian region. The language is called Old Prussian to avoid confusion with the German dialects of Low Prussian and High Prussian and with the adjective Prussian as it relates to the later German state. Old Prussian began to be written down in the Latin alphabet in about the 13th century, and a small amount of literature in the language survives.

In addition to Prussia proper, the original territory of the Old Prussians might have included eastern parts of Pomerelia (some parts of the region east of the Vistula River). The language might have also been spoken much further east and south in what became Polesia and part of Podlasie, with the conquests by Rus and Poles starting in the 10th century and the German colonisation of the area that began in the 12th century.[clarification needed]

Relation to other languages

With the conquest of the Old Prussian territory by the Teutonic Knights in the 13th century, and the subsequent influx of Polish, Lithuanian and especially German speakers, Old Prussian experienced a 400-year-long decline as an "oppressed language of an oppressed population".[7] Groups of people from Germany, Poland,[8][9] Lithuania, Scotland,[10] England,[11] and Austria (see Salzburg Protestants) found refuge in Prussia during the Protestant Reformation and thereafter. Old Prussian ceased to be spoken probably around the beginning of the 18th century,[2] due to many of its remaining speakers dying in the famines and bubonic plague epidemics which harrowed the East Prussian countryside and towns from 1709 until 1711.[12] The Germanic regional dialect of Low German spoken in Prussia (or East Prussia), called Low Prussian (cf. High Prussian, also a Germanic language), preserved a number of Baltic Prussian words, such as kurp, from the Old Prussian kurpi, for shoe in contrast to common Low German Schoh (standard German Schuh).[citation needed]

Before the 1930s, when Nazi Germany began a program of Germanisation, Old Prussian river- and place-names, such as Tawe and Tawellningken, could still be found.[13][citation needed]

Versions of the Lord's Prayer

Lord's Prayer in Old Prussian (from the so-called "1st Catechism")

The epigram of Basel - oldest known inscription in Prussian language and Baltic language in general, middle of 14th c

This jocular inscription was most probably made by a Prussian student studying in Prague (Charles University); found by Stephen McCluskey (1974) in manuscript MS F.V.2 (book of physics Questiones super Meteororum by Nicholas Oresme), fol. 63r, stored in the Basel University library.

With other remains being merely word lists, the grammar of Old Prussian is reconstructed chiefly on the basis of the three Catechisms. There is no consensus on the number of cases that Old Prussian had, and at least four can be determined with certainty: nominative, genitive, accusative and dative, with different desinences. There are traces of a vocative case, such as in the phrase O Deiwe Rikijs "O God the Lord", reflecting the inherited PIE vocative ending *-e. There was a definite article (stas m., sta f.); three genders: masculine, feminine and neuter, and two numbers: singular and plural. Declensional classes were a-stems, ā-stems (feminine), ē-stems (feminine), i-stems, u-stems, ī/jā-stems, jā/ijā-stems and consonant-stems. Present, future and past tense are attested, as well as optative forms (imperative, permissive), infinitive, and four participles (active/passive present/past).

The following description is based on the phonological analysis by Schmalstieg (1974):

A few linguists and philologists are involved in reviving a reconstructed form of the language from Luther's catechisms, the Elbing Vocabulary, place names, and Prussian loanwords in the Low Prussian dialect of German. Several dozen people use the language in Lithuania, Kaliningrad, and Poland, including a few children who are natively bilingual.[citation needed]

The Prusaspirā Society has published their translation of Antoine de Saint-Exupéry's The Little Prince. The book was translated by Piotr Szatkowski (Pīteris Šātkis) and released in 2015.[19] The other efforts of Baltic Prussian societies include the development of online dictionaries, learning apps and games. There also have been several attempts to produce music with lyrics written in the revived Baltic Prussian language, most notably in the Kaliningrad Oblast by Romowe Rikoito,[20] Kellan and Āustras Laīwan, but also in Lithuania by Kūlgrinda in their 2005 album Prūsų Giesmės (Prussian Hymns),[21] and in Latvia by Rasa Ensemble in 1988[22] and Valdis Muktupāvels in his 2005 oratorio "Pārcēlātājs Pontifex" featuring several parts sung in Prussian.[23]