Oka is a small village on the northern bank of the Ottawa River (Rivière des Outaouais in French), northwest of Montreal, Quebec, Canada. Located in the Lower Laurentians on Lake of Two Mountains, where the Ottawa has its confluence with the St. Lawrence River, the town has a main thoroughfare that is now part of Quebec Route 344. It's located 50 km (30 miles) northwest of Montreal.

This area was colonized by French settlers as a mission to First Nations in 1721 by brothers of the Sulpician Order branch of the Roman Catholic Church. Traditional owners are Mohawk (Kanienkaha), Algonquin, and Nipissing, who had a village known as Kanesatake, now a reserve within the boundaries of Oka.

Oka is historically connected to the first Amerindian mission established by the Sulpicians in Montreal. It was in 1718, moreover, that the Sulpicians obtained from the King of France the concession of the seigneury of Deux-Montagnes which corresponded to the present territories of the parishes of Oka, Saint-Placide, Saint-Benoît, Saint-Joseph The lake and the surrounding area.[4]

The mission of La Montagne was transferred in 1696 to Sault-au-Récollet in Montreal and from there to Lac des Deux-Montagnes in 1721. This last movement was facilitated by the fact that in 1717 the Seigneurie du Lac Of the Deux-Montagnes was conceded to the Sulpicians by the King of France on the express condition of transferring the Indian mission there. Final concession was given in 1718 after the transfer of the mission proper. In 1720 Catholic Iroquois who were previously at the Sault au Récollet mission were moved to the new location.[5] In 1721, under the direction of Quere de Tréguron, Sulpician, a group of Algonquins and Iroquois emigrated on the shores of Lake Deux-Montagnes.[4]

By 1722 the transfer was almost completed. The proposed site was advantageous for the conversion of the Indians and for their defense and that of the colony. To prepare their installation, another Sulpician, Mr. Gay (who was the superior), made some clearing and build various buildings including a chapel, the missionary's house, a school intended for the Sisters of the Congregation Notre-Dame as well as cabins for the Indians. The Indian population increased considerably around 1727 when the Nipissingues and the Algonquins of the Île-aux-Tourtes mission also came to the Lake with their missionary Pierre-Élie Déperet.[4]

It is impossible to speak of the Lordship of the Lake without recalling that between 1740 and 1742, there was the setting up of the seven oratories that constitute the famous Calvary of Oka, work of the Sulpicians. Francois dit Belleville (who arrived in Nouvelle-France in 1754) was the author of the bas-reliefs of the chapels of this pilgrimage site, which is the oldest in America. The missionary Louis-Urgel Lafontaine (1895-1930) was the last to preach in Iroquois [language] at the location. The Calvary was built by the Indians and only for them in order to evangelize them.[4]

In the 19th century, as a result of the conquest of 1760, there was unrest among the various communities. The Mohawks allied with the British and turned against the French while the Algonquins had taken the side of the French.[citation needed]

The present church was built between 1878 and 1883 according to the plans of the architects Perrault and Mesnard.[4]

In 1990, the small community gained international attention in what became known as the Oka Crisis. It had approved development of a private golf course, to add nine holes and nearby luxury housing. The Mohawk of Kanesatake opposed this.

Several years before the crisis the Mohawks had initiated and lost a land claim court case in which they tried to gain control of what they termed "historic land". Land known from the early mission settlement as the "pine forest". The claim was rejected by the Provincial courts.

Much of the anger over this court loss and other non Oka related issues, as witnessed by the congregation of other tribes which had unresolved land claim issues resulting from the British conquests was unleashed during the crisis.

The Mohawk of Kanesatake barricaded a dirt road leading to the land. During a 78-day confrontation, the Quebec Police Force (SQ) (and later Canadian Army units) confronted members of the Mohawk nation of the adjacent community of Kanesatake. The latter were joined by other Mohawk and First Nations and Native American tribes. In addition, for several weeks, Mohawk at Kahnawake blockaded the approach to the Mercier Bridge, a route that ran through their land. Negotiations finally led to the Mohawk re-opening the road. An SQ officer Corporal Lemay was shot and killed at a period of heightened tensions. Numerous people were arrested. The disputed area was acquired by the Canadian Federal Government to appease the developers. Development was stopped.

Some in the media reported the Mohawk's opposition to be based on the expansion of the golf course over what the Mohawks considered sacred land. This however was never the premise of contention. Instead the dispute laid over persistent claims dating back to land right issues between the Sulpicians and Mohawks that related not to burial grounds or cemeteries, but to what was known as the "pine forest" and that commenced at the onset of the British conquests, the Mohawks allegiance to them and the definite change of attitude of the Mohawks towards the French.[6]

The Oka crisis garnered a great deal of media attention, and brought forth dozens of articles and books. The death of Corporal Lemay remains unsolved however, and the ongoing land claims to the pine forest have all, as of January 16, 2017, been dismissed in Federal courts. Despite promises to the contrary much of the disputed land obtained by the Federal Government remains unceded to traditional owners.

Highway 344 passes through Oka. The Oka Express goes to the Deux-Montagnes station and Terminus Saint-Eustache

In the summertime, the community's long stretch of beachfront along the Ottawa River and the Lake of Two Mountains, and its marina draw people to the area from Montreal and neighboring cities. Another attraction is the Abbey of Notre-Dame du Lac, famous for its Oka cheese produced by Trappists monks there.

A small ferry service operates between Oka and the town of Hudson across the Ottawa River. During the winter months, a toll ice bridge provides access on this route.[8] There is also connection with the AMT Deux-Montagnes Train to and from Montreal's Central Station and Deux-Montagnes Station by the Oka Express minibus.[9] 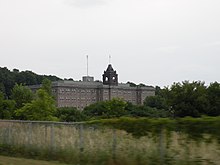 Some portions are instead zoned to École de l'Amitié in Saint-Placide.[13]