listen)) is a city in North Macedonia and the seat of the Ohrid Municipality. It is the largest city on Lake Ohrid and the eighth-largest city in the country, with over 42,000 inhabitants as of 2002. Ohrid once had 365 churches, one for each day of the year, and has been referred to as a "Jerusalem of the Balkans".[2][4] The city is rich in picturesque houses and monuments, and tourism is predominant. It is located southwest of Skopje, west of Resen and Bitola. In 1979 and in 1980 respectively, Ohrid and Lake Ohrid were accepted as Cultural and Natural World Heritage Sites by UNESCO. Ohrid is one of only 28 sites that are part of UNESCO's World Heritage that are Cultural as well as Natural sites.[5] 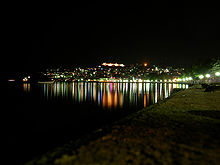 Ohrid by night. The ancient name of the city was Lychnidos, which probably means "city of light"

In antiquity the city was known under the ancient Greek name of Λυχνίς (Lychnis) and Λυχνιδός (Lychnidos) and the Latin Lychnidus,[6][7] probably meaning "city of light", literally "a precious stone that emits light",[8] from λύχνος (lychnos), "lamp, portable light".[9] Polybius, writing in the second century BC, refers to the town as Λυχνίδιον - Lichnidion.[10] It became capital of the First Bulgarian Empire in the early medieval period, and was often referred to by Byzantine writers as Achrida (Ἄχριδα, Ὄχριδα, or Ἄχρις).[11][6] By 879 AD, the town was no longer called Lychnidos but was referred to as Ohrid.[12][13] In Macedonian language and the other South Slavic languages, the name of the city is Ohrid (Охрид). In Albanian, the city is known as Ohër or Ohri and in modern Greek Ochrida (Οχρίδα, Ωχρίδα) and Achrida (Αχρίδα).

Distribution of cities in antiquity in the border of southern Illyria with Greeks and Thracians.

The earliest inhabitants of the widest Lake Ohrid region were the Enchele, an Illyrian tribe[14] and the Dassaretae, an ancient Greek tribe based further East in the region of Lynkestis.[15][16] According to recent excavations this was a town as early as of king Phillip II of Macedon.[17] They conclude that Samuil's Fortress was built on the place of an earlier fortification, dated to 4th century BC.[17] During the Roman conquests, towards the end of 3rd and the beginning of 2nd century BC, the Dassaretae and the region Dassaretia were mentioned, as well as the ancient Greek city of Lychnidos (Greek: Λυχνιδός).[18] The existence of the ancient Enchelean city of Lychnidos is linked to the Greek myth and king of Thebes, Cadmus who, banished from Thebes, in Boeotia, fled to the Enchele[19] and founded the town of Lychnidos[20] on the shores of the modern Lake Ohrid.[21] The Lake of Ohrid, the ancient Greek Lacus Lychnitis (Greek: Λυχνίτις), whose blue and exceedingly transparent waters in antiquity gave to the lake its Greek name; it was still called so occasionally in the Middle Ages. It was located along the Via Egnatia, which connected the Adriatic port Dyrrachion (present-day Durrës) with Byzantium. Archaeological excavations (e.g., the Polyconch Basilica from 5th century) prove early adoption of Christianity in the area. Bishops from Lychnidos participated in multiple ecumenical councils. 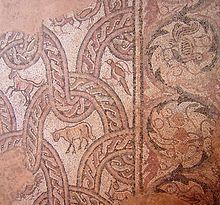 Floor mosaic in the Polyconch Basilica.

The Annunciation from Ohrid, one of the most admired icons of the Paleologan Mannerism from the Church of St. Climent.

The South Slavs began to arrive in the area during the 6th century AD. By the early 7th century it was colonized by a Slavic tribe known as the Berziti. Bulgaria conquered the city around 840.[22] The name Ohrid first appeared in 879. The Ohrid Literary School established in 886 by Clement of Ohrid became one of the two major cultural centres of the First Bulgarian Empire. Between 990 and 1015, Ohrid was the capital and stronghold of the Bulgarian Empire.[23] From 990 to 1018 Ohrid was also the seat of the Bulgarian Patriarchate.[24] After the Byzantine reconquest of the city in 1018 by Basil II, the Bulgarian Patriarchate was downgraded to an Archbishopric of Ohrid, and placed under the authority of the Ecumenical Patriarch of Constantinople.

The higher clergy after 1018 was almost invariably Greek, including during the period of Ottoman domination, until the abolition of the archbishopric in 1767. At the beginning of the 16th century the archbishopric reached its peak subordinating the Sofia, Vidin, Vlach and Moldavian eparchies, part of the former medieval Serbian Patriarchate of Peć, (including Patriarchal Monastery of Peć itself), and even the Orthodox districts of Italy (Apulia, Calabria and Sicily), Venice and Dalmatia.

As an episcopal city, Ohrid was a cultural center of great importance for the Balkans. Almost all surviving churches were built by the Byzantines and by the Bulgarians, the rest of them date back to the short time of Serbian rule during the late Middle Ages.[25]

Bohemond, leading a Norman army from southern Italy, took the city in 1083. Byzantines regained it in 1085. In the 13th and 14th century the city changed hands between the Despotate of Epirus, the Bulgarian, the Byzantine and the Serbian Empire, as well as local Albanian rulers. In the mid-13th century Ohrid was one of the cities ruled by Pal Gropa, a member of the Albanian noble Gropa family.[26] In 1334 the city was captured by Stefan Uroš IV Dušan and incorporated in the Serbian Empire.[27] After Dusan's death the city came under the control of Andrea Gropa, while after his death Prince Marko incorporated it in the Kingdom of Prilep.[28] In the early 1370s Marko lost Ohrid to Pal II Gropa, another member of the Gropa family and unsuccessfully tried to recapture it in 1375 with Ottoman assistance.[29] In 1395 the Ottomans under Bayezid I captured the city which became the seat of the newly established Sanjak of Ohrid. In 14–15 September 1464 12,000 troops of the League of Lezhë and 1,000 of the Republic of Venice defeated a 14,000-man Ottoman force near the city. When Mehmed II returned from Albania after his actions against Skanderbeg in 1466 he dethroned Dorotheos, the Archbishop of Ohrid, and expatriated him together with his clerks and boyars and considerable number of citizens of Ohrid to Istanbul, probably because of their anti-Ottoman activities during Skanderbeg's rebellion when many citizens of Ohrid, including Dorotheos and his clergy, supported Skanderbeg and his fight.[30][31][32] 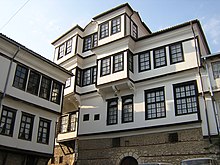 The house of the wealthy Robevi family.

The Christian population declined during the first centuries of Ottoman rule. In 1664 there were only 142 Christian houses. The situation changed in the 18th century when Ohrid emerged as an important trade center on a major trade route. At the end of this century it had around five thousand inhabitants. Towards the end of the 18th century and in the early part of the 19th century, Ohrid region, like other parts of European Turkey, was a hotbed of unrest. In the 19th century the region of Ohrid became part of the Pashalik of Scutari, ruled by the Bushati family.[33] After the Christian population of the bishopric of Ohrid voted on a plebiscite in 1874 overwhelmingly in favour of joining the Bulgarian Exarchate (97%), the Exarchate became in control of the area.[34] In 1889, according to a French research, the city had 2.500-3.000 houses and approximately 12.000 individuals, of which 2/3 were Bulgarians and Vlachs and the rest 1/3 were Albanophone Muslims with 20-25 Slavophone Greek families.[35] In statistics gathered by Vasil Kanchov in 1900, the city of Ohrid was inhabited by 8000 Bulgarians, 5000 Turks, 500 Muslim Albanians, 300 Christian Albanians, 460 Vlachs and 600 Romani.[36] Before 1912, Ohrid was a township center bounded to Monastir sanjak in Manastir Vilayet (present-day Bitola). The city remained under Ottoman rule until 29 November 1912, when the Serbian army took control of the city during the Balkan Wars and later made it the capital of Ohrid district. In Ohrid, Serbian forces killed 150 Bulgarians and 500 people consisting of Albanians and Turks.[37] In September 1913 local Albanian and pro-Bulgarian Internal Macedonian Revolutionary Organization leaders rebelled against the Kingdom of Serbia. It was occupied by Kingdom of Bulgaria between 1915 and 1918 during World War I.

During Kingdom of Yugoslavia Ohrid continued to be as an independent district (Охридског округа) (1918-1922), then it became a part of Bitola Oblast (1920-1929), and then from 1929 to 1941, Ohrid was part of the Vardar Banovina. It was occupied again by Bulgaria between 1941 and 1944 during World War II. Since the days of SFR Yugoslavia Ohrid has been the municipal seat of Municipality of Ohrid (Општина Охрид). Since 1991 the town is part of the Republic of Macedonia.

On 20 November 1993, Avioimpex Flight 110 crashed near Ohrid, killing all 116 people on board. It is the deadliest aviation disaster to occur in Macedonia.[38]

Ohrid is located in the south-western part of North Macedonia, on the banks of Lake Ohrid, at an elevation of 695 meters above sea level.

The mother tongues of the city's residents include the following:

The religious composition of the city was the following:

The oldest inhabitants of Ohrid are a few families that reside in the Varoš neighbourhood.[41] Other Macedonians have settled in Ohrid and originate from the villages of the Kosel, Struga, Drimkol, Debarca, Malesija and Kičevo regions and other areas from southern Macedonia.[41] In 1949, additional families from Aegean Macedonia settled in Ohrid.[41]

The presence of the Turkish community dates from their settlement in Ohrid during 1451–81.[41] All Turks from the village of Peštani after selling properties and land moved to Ohrid by 1920 and today those few families are known as Peştanlı.[42]

The local Romani population in Ohrid originates from Podgradec and speaks the southern Tosk Albanian dialect.[41] In the latter decades of the 20th century, some Albanian speaking Muslim Romani from the villages of Krani and Nakolec have migrated to Ohrid.[43] In Yugoslav censuses, Albanophone Ohrid Romani mainly declared as Albanians.[44] As tensions between Albanians and the state increased over numbers regarding community size and sociopolitical rights, Romani identity became politicized and contested from the 1990s onward.[44] Ohrid Albanophone Romani refused identification as Albanians seeing it as a result of Albanisation (or to be called Gypsies) and with encouragement from Macedonian circles now refers to itself as Egyptians whose ancestors migrated from Egypt many centuries ago.[44] The Albanian language is considered by Ohrid Albanophone Romani as only an idiom of the home and not a mother tongue.[44] Turkish speaking Romani reside in Ohrid that during the Yugoslav period self declared themselves mainly as Turks,[41] while within independent Macedonia they identify as Egyptians.[44] 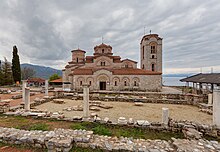 The church of St. Clement and St. Panteleimon in Ohrid 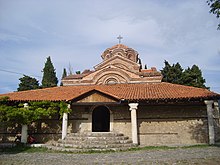 Mother of God Perybleptos church, located across the icon gallery

There is a legend supported by observations by the 17th century Ottoman traveler Evliya Çelebi that there were 365 chapels within the town boundaries, one for every day of the year. Today this number is significantly smaller.

Besides being a holy center of the region, it is also the source of knowledge and pan-Slavic literacy. The restored Monastery at Plaošnik was actually one of the oldest Universities in the western world, dating before the 10th century.

Ohrid is also home to Vila Biljana, which serves as an official residence of the President of North Macedonia. 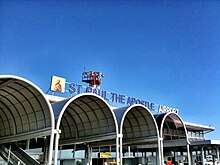 There is a nearby international airport, Ohrid Airport (now known as "St. Paul the Apostle Airport") that is open all year round.

GFK Ohrid Lihnidos is a football team playing at the SRC Biljanini Izvori stadium in the city. As of the 2019–20 season they play in the second tier of the Macedonian Football League system.

RK Ohrid is a handball team playing at Biljanini Izvori Sports Hall arena, with a capacity of 3,500. As of the 2016–17 season they play in the Macedonian Handball Super League, which is the top tier.

The Ohrid Swimming Marathon is an international open water swimming competition, always taking place in the waters of Lake Ohrid. The swimmers are supposed to swim 30 km (19 mi) from the monastery of Saint Naum to the Ohrid harbor.

Ohrid is twinned with: