Loyalist is a township in central eastern Ontario, Canada on Lake Ontario. It is in Lennox and Addington County and consists of two parts: the mainland and Amherst Island. It was named for the United Empire Loyalists, who settled in the area after the American Revolution.

Loyalist Township was formed on January 1, 1998, through the amalgamation of Amherst Island Township, Ernestown Township, and Bath Village.

The primary centres of settlement in Loyalist are Amherstview, Bath and Odessa. Smaller communities include Asselstine, Bayview, Emerald, Ernestown, Links Mills, McIntyre, Millhaven, Morven, Nicholsons Point, Stella, Storms Corners, Switzerville, Thorpe, Violet and Wilton. Since Loyalist Township is the only municipal level of government in the area, the boundaries of most settlements are unofficial and matters of tradition.

Amherstview is named for Amherst Island, located directly to the south in Lake Ontario. When the community was first established in the 1950s, the spelling was generally "Amherst View". The community is the eastern end of the Loyalist Parkway, a stretch of Highway 33 that travels along Lake Ontario, in an area in which many United Empire Loyalists settled.

Amherstview is home to Fairfield House which is situated in Fairfield Park on the shore of Lake Ontario. Fairfield House was constructed in 1793 by the Fairfield family who were among the first Loyalists to settle the area. It served as the family home and a portion of the building was also used as a tavern for some time. The wood and limestone building is now a museum exhibiting period artifacts and furniture and offering guided tours.

Fairfield Park itself stretches along more than 600 m of Lake Ontario shoreline. The park is a popular picnicking area and is also well used by swimmers and scuba divers. Limestone shelf rock formations leading into the water simplify the launching and landing of kayaks and canoes although suitable facilities for larger watercraft do not exist. The park is home to many species of trees including red oak, poplar, willow, shagbark hickory, ash, maple, cedar, linden, and spruce. Extensive banks of lilac provide flowers and fragrance in season and many of the larger trees in the park are fitted with strings of lights for display at Christmas.

Amherstview is also home to the Henderson Recreation Centre. The centre houses a public library, a 25 m public swimming pool, and an arena and also includes an outdoor soccer field. The arena is the home rink for the Amherstview Jets hockey team.

Bath was first settled by the United Empire Loyalists in 1784, making it one of the oldest communities in Ontario. It was served by an early colonial road, the 1784 Bath Road, which follows the lakefront as the Loyalist Parkway. Discharged soldiers from Jessup's Rangers were the first settlers. The economic development of the community was enabled by a sheltered harbour and road connections with Kingston stimulated economic development. By mid-century Bath was a prosperous point of trade.[2] After the town had been divided up between the families of Hawley, Davy, Rose and Amey, it was John Davy who was first to lay down roads on his lot #10. By 1804 the whole village had been prepared for settlement and surveyed. The village was originally named Ernestown, but was renamed Bath in 1819 after the city in England.

A bustling lakefront manufacturing village with 400-1000 people in the 1850s, Bath began to lose industrial importance to Napanee (and to cities like Kingston/Belleville) after being successively bypassed by the York Road (1817), the Grand Trunk Railway (1856) and the 401 motorway (1964). The closest rail access was an 1856 Ernestown rail station built to the west of Camden East Road in a rural area, similar in design to Napanee's historic station; it is now boarded up and inaccessible.[3]

The village was incorporated in 1859 and disincorporated by its 1998 annexation to Loyalist Township. Bath is directly west of Millhaven, the location of Millhaven Institution.Loyalist Golf and Country Club is a golf course in Bath. Every year on July 1 there is a Canada Day celebration featuring a parade and fair. Bath is home to the medium security prison Bath Institution, which is co-located within the Millhaven Institution. 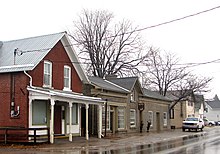 Odessa, originally named Millcreek, was renamed in 1855 by its postmaster to commemorate the 1854 British siege of the Black Sea port at Odessa in Ukraine during the Crimean War.[4] The village is home to Ernestown Secondary School, which services about 650 students from Loyalist Township (formerly Ernestown Township), Napanee and Stone Mills. The township offices and a fire hall are on Odessa's Main Street. There is a small fairground. An Ontario Provincial Police detachment serves Ontario Highway 401 and home to Tactics and Rescue Unit Eastern Region.

The water supply of the community of Odessa within the Township of Ernestown was studied in 1972,[5] which led to the planning of infrastructure improvements. The highest point in the village is the water tower. Visible for several kilometres in all directions, the water tower has been outfitted as a wireless communications facility. The village bills itself as "home of the Babcock Mill," which historically was powered by Millhaven Creek which runs through the heart of Odessa. 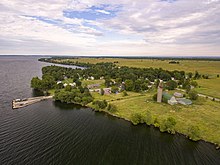 Stella and Emerald are located on Amherst Island. Stella is the major hamlet, where the ferry docks are, and lends its name as the postal outlet name for Amherst Island. Emerald is a collection of 4 houses and a church toward the west end of the Island. Amherst Island is located about 3 kilometres (1.9 mi) offshore from the rest of Loyalist Township, and is serviced by an automobile and truck ferry from Millhaven. Amherst Island was farmed for generations by Irish tenants who rented from a Lord through his manager, and many residents are descendants of those early settlers. Today it has a small arts community, a number of volunteer civic groups, and a radio station, CJAI-FM, that add to the island's special flavour.

Primary and secondary education is provided at a number of schools operated by either the Limestone District School Board or the Algonquin and Lakeshore Catholic District School Board, including Amherstview Public School (K-8) and Ernestown Secondary School (9-12). our lady of mount carmel The nearest post-secondary education (community college and university) is in the adjacent city of Kingston.

The Tragically Hip have a recording studio located in Bath called The Bathouse Recording Studio. The band's lead singer, Gordon Downie, was born and raised in Amherstview and attended Amherstview Public School (AVPS).

The Township hosts a Winter Carnival each year toward the end of January. A popular event associated with the Carnival is the Christmas Tree Bonfire. In the weeks after Christmas, residents pile their dead Christmas trees at the Odessa Fair Grounds. On an evening during the Carnival, the trees are set blaze as the centrepiece to a night of skating, outdoor games, and the roasting of hotdogs and marshmallows.

The township is served by provincial Highway 401 Highway 2, and Highway 33.

Public transportation between Amherstview and Kingston is provided by Kingston Transit.

A toll ferry, the Frontenac II, operates between Millhaven (on the Ontario mainland) and Stella (on Amherst Island). As of June 2012, the toll is $9 for a return trip ticket on a standard car or light truck. There is a nominal charge for bicycles and motorcycles while walk-on passengers are free.

Populations prior to amalgamation (1998):