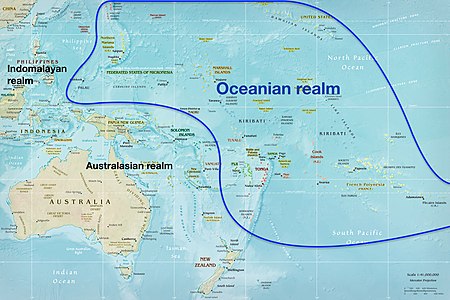 Map of Oceanian realm. It extends further east to include Rapa Nui and Sala y Gomez.

The Oceanian realm is one of the World Wildlife Fund (WWF) biogeographic realms, and is unique in not including any continental land mass. It is the smallest in land of an area of the WWF realms.

This realm includes the islands of the Pacific Ocean in: Micronesia, the Fijian Islands, the Hawaiian islands, and Polynesia (with the exception of New Zealand).[1] New Zealand, Australia, and most of Melanesia including New Guinea, Vanuatu, the Solomon Islands, and New Caledonia are included within the Australasian realm.

Conversely, New Guinea, New Caledonia, Solomon Islands and New Zealand are included in the Oceanian realm in the classification scheme developed by Miklos Udvardy in 1975.[2][3]

Oceania is geologically the youngest realm. While other realms include old continental land masses or fragments of continents, Oceania is composed mostly of volcanic high islands and coral atolls that arose from the sea in geologically recent times, many of them in the Pleistocene. They were created either by hotspot volcanism, or as island arcs pushed upward by the collision and subduction of tectonic plates. The islands range from tiny islets, sea stacks and coral atolls to large mountainous islands, like Hawaii and Fiji.

Larger islands with diverse ecological niches encouraged floral and faunal adaptive radiation, whereby multiple species evolved from a common ancestor, each species adapted to a different ecological niche; the various species of Hawaiian honeycreepers (Family Drepanididae) are a classic example. Other adaptations to island ecologies include gigantism, dwarfism, and among birds, loss of flight. Oceania has a number of endemic species; Hawaii in particular is considered a global 'center of endemism', with its forest ecoregions having one of the highest percentages of endemic plants in the world.

Land plants disperse by several different means. Many plants, mostly ferns and mosses but also some flowering plants, disperse on the wind, relying on tiny spores or feathery seeds that can remain airborne over long distances notably Metrosideros trees from New Zealand spread on the wind across Oceania. Other plants, notably coconut palms and mangroves, produce seeds that can float in salt water over long distances, eventually washing up on distant beaches, and thus Cocos trees are ubiquitous across Oceania. Birds are also an important means of dispersal; some plants produce sticky seeds that are carried on the feet or feathers of birds, and many plants produce fruits with seeds that can pass through the digestive tracts of birds. Pandanus trees are fairly ubiquitous across Oceania.

Botanists generally agree that much of the flora of Oceania is derived from the Malesian Flora of the Malay Peninsula, Indonesia, the Philippines, and New Guinea, with some plants from Australasia and a few from the Americas, particularly in Hawaii. Easter Island has some plants from South America such as the totora reed. 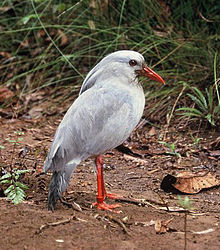 Dispersal across the ocean is difficult for most land animals, and Oceania has relatively few indigenous land animals compared to other realms. Certain types of animals that are ecologically important on the continental realms, like large land predators and grazing mammals, were entirely absent from the islands of Oceania until humans brought them. Birds are relatively common, including many seabirds and some species of land birds whose ancestors may have been blown out to sea by storms. Some birds evolved into flightless species after their ancestors arrived, including several species of rails. A number of islands have indigenous lizards, including geckoes and skinks, whose ancestors probably arrived on floating rafts of vegetation washed out to sea by storms. With the exception of bats, which live on most of the island groups, there are few if any indigenous mammal species in Oceania.

Many animal and plant species have been introduced by humans in two main waves.

Malayo-Polynesian settlers brought pigs, dogs, chickens and polynesian rats to many islands; and had spread across the whole of Oceania by 1200 CE. From the seventeenth century onwards European settlers brought other animals, including cats, cattle, horses, small Asian mongoose (Herpestes javanicus), sheep, goats, and the brown rat (Rattus norvegicus). These and other introduced species, in addition to overhunting and deforestation, have dramatically altered the ecology of many of Oceania's islands, pushing many species to extinction or near-extinction, or confining them to small islets uninhabited by humans.

The absence of predator species caused many bird species to become 'naive', losing the instinct to flee from predators, and to lay their eggs on the ground, which makes them vulnerable to introduced predators like cats, dogs, mongooses, and rats. The arrival of humans on these island groups often resulted in disruption of the indigenous ecosystems and waves of species extinctions (see Holocene extinction event). Easter Island, the easternmost island in Polynesia, shows evidence of a human-caused ecosystem collapse several hundred years ago, which contributed (along with slave raiding and European diseases) to a 99% decline in the human population of the island. The island, once lushly forested, is now mostly windswept grasslands. More recently, Guam's native bird and lizard species were decimated by the introduction of the brown tree snake (Boiga irregularis) in the 1940s. 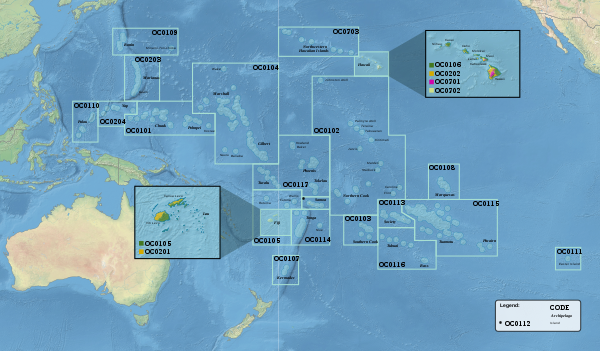